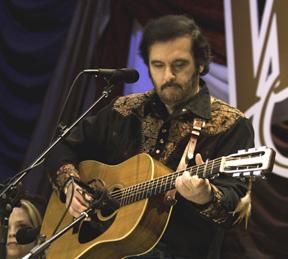 Every Monday night, musical history is made as the “Woodsongs Old Time Radio Hour” begins its regular radio and television broadcast at the Kentucky Theatre. The house is packed as stage lights dim. Michael Johnathon comes onstage and introduces himself as a folksinger, songwriter and tree-hugger. What he doesn’t say is that he is also a playwright, producer author and touring artist.

Johnathon has a worldwide radio audience exceeding a million listeners each week. “Woodsongs” is a showcase for grass-roots musicians who, like Johnathon, make their living writing and playing folk music. Despite his busy schedule, Johnathon continues to tour and perform his music that features the guitar and banjo.

The White Gull Inn of Fish Creek is proud to feature the artist as a part of their 24th season of Winter Folk Concerts on Wednesday, November 12 at 8 pm.

An optional pre-concert dinner, including a Balsamic braised pork loin chop, apple cranberry compote, herbed pilaf, salad, and pumpkin pie, will be served at 6 pm for $18.95. Concert tickets are $15 and may be purchased at the door, though they often sell fast, so reservations are encouraged. To reserve tickets for dinner and/or the concert, call 920.868.3517 or 800.624.1987, or visit http://www.whitegullinn.com.

Upcoming performances in the series include: Daisy May Erlewine and Seth Bernard on December 17, Lou and Peter Berryman on January 7, Garnet Rogers on January 21, Peter Mulvey on February 4 and Jonathan Byrd on April 1.