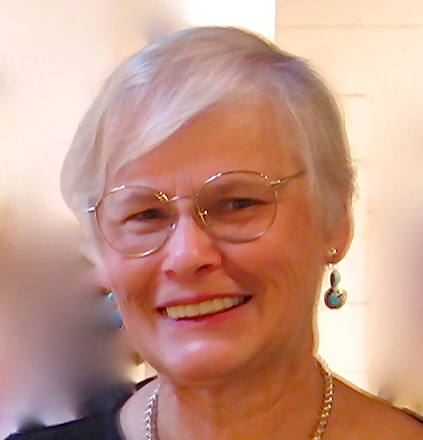 Even though she won a gold star for it, Nancy Rafal discounts the poem she wrote about the wind in sixth grade.

“Awful poem,” she said. “I should say it was in a two-room school, so it didn’t take much to get a gold star.”

It would be many years before the Milwaukee native would return to poetry, and not until she and her late husband had moved to Door County.

“I put that all away until we came up here in 1994,” said Door County’s new poet laureate.

She once heard someone describe Door County as a poem. “I think for all kinds of different reasons that is the case.”

After life as an educator – teaching elementary school and junior high – and as library media-center director for three schools in Lombard, Illinois, Rafal and her late husband, Harry, moved to Baileys Harbor.

“I guess it was always there, but it didn’t come to the top until I moved here. I got back to it and discovered Lorine Niedecker, and the rest is history,” she said.

In Door County she found a welcoming artistic and literary community.

“There is more willingness to help each other along the way, but maybe that’s just the kind of glasses I’m wearing,” she said. “I give a lot of credit to Barbara Larsen [who served as Door County’s second poet laureate and was a regional representative for the Wisconsin Fellowship of Poets]. It just so happened that very soon in that time, within a couple years, she was hosting the state group at Leathem Smith, and Mark Turcotte was the reader. With all of those things, what else can you do?”

Now in retirement, Rafal said she could focus on writing poetry.

“Retirement offers you a lot of possibilities, and you have to learn to say no,” she said. “With Barbara, and getting into a critique group, and finding out that some of my things were published – that kept me going.”

The critique group she joined is called Word Women.

“I think it would accept men, but they haven’t come forward,” Rafal said. “The membership has changed, but we still have great trust, and we can be honest. It’s a good give-and-take.”

Having honest criticism and maintaining the honesty with herself was important in finding her poetic voice.

“Finding the honesty to write is important,” she said. “Just this weekend at the Kress Center, Write On held Paths to Publication. Speaker after speaker talked about [how] you have to kill your darlings. Something you thought was really good, both in poetry and prose, was really just the scaffolding to get you there.”

Rafal said much of her focus is on free verse.

“Although I have written rhyme things, thanks to Marilyn Taylor, who teaches quite often at Björklunden,” she said. “But most of the time it is free verse. I know I didn’t invent this, but I was looking at some of my stuff from a while ago, and I had this cascading style … It made sense at the time.”

Being a part of the community of poets here in the county and across the state has been important to Rafal.

“I’ve been active in the Wisconsin Fellowship of Poets. I was the treasurer for a number of years,” she said. “They have two conferences a year. It’s just very nice to have that community, very supportive. Everyone’s trying to sell their books. You buy the books and read and see there’s room for everybody.”

She is proud to have been asked by Cari Lewis, executive director of the Door Community Auditorium; and board member Pete Thelen to have a poetry event during the winter Fireside series.

“So I organized the first one and came up with the [name] Words on Fire,” Rafal said. “I’m really pleased how they changed it this year to be Words on Water. I can see a whole evolution to be Words on Whatever.”

Rafal said she intends to use her two-year term as poet laureate to advocate for poetry.

And you can hear her read, along with Sharon Auberle, who preceded her as poet laureate, at a series of readings at libraries that begins at Baileys Harbor Library on April 19, 11 am. The next readings will be at the Fish Creek Library on April 22, 1 pm; Sturgeon Bay on April 23, 6 pm; and Forestville on April 29, 5:30 pm.

“It seems that each person who has been poet laureate has had a project,” Rafal said. “Molly Peacock has a book about how to read a poem and start a poetry circle. I would like to continue that idea of going around to different places – not just to read my stuff, but to have people bring in poetry they enjoy and do poetry circles.”

This poem was read at a recent county board meeting when Rafal was introduced as the next county poet laureate.

Angling Up the Peninsula

The Brussels Hill presents a new face pockmarked with turkeys
Swayback log buildings pull our vision
beyond twin strips of concrete
Red brick and cream call out Brussels and Clay Banks
No railroad tracks along the Ahnapee,
a hiking trail now oversees the bog

Past the city along the quiet side
skeletons of dead barns stare blindly
Just before Mr. G’s, the little three-bay
someone took the effort to roof with metal.
Further north four-square farmhouses
updated, standing proud.

Find a side road before Jacksonport and venture toward the lake.
New homes for pensioners
some in scale with their surroundings
some not.

Keep going through Baileys with that got-everything hardware store
and Toft family legacy
Northward past the farms from which Wallace and Hazel
guaranteed live arrival.

Prepare to angle down, perhaps along the bay
Woven through it all
acres and acres of cuestal land
locked in preservation
to be enjoyed beyond seven generations

Thoughts on Writing When the Moon Is Full but Clouds Obscure It
Thanks to Beth Bartoli, naturalist at Newport State Park

While waiting for others to arrive
this overcasted rainy evening
Several of us watch a caterpillar cast off its skin
and begin the journey to butterfly
Within an hour the chrysalis is formed and by the next day
the transformation will be complete
The entire cycle from egg to butterfly takes about thirty days
Time for the moon to go from full to new to full again
Time for a woman’s body to prepare
for the possibility of new life
Preparations that repeat monthly
This Pisces moon has many names and is thought to have
the power to cleanse, to renew, to create
I am ready to bathe in its golden glow and, like
that newly emerged Monarch which may or may not
be the generation destined for Mexico,
I am ready
to spread my wings
ride the currents
relying on my inner compass
to stay the course

Namaste
The perfect person is like an empty boat.  — Lao Tzu

Be not a burden Be not a bearer of burdens

Look beyond What do you see

All that matters is that it be empty

Sometime after copper bottoms and before teflon
between Aunt Jemima and Martha Stewart
in a land of aprons, Settlement and Betty Crocker
She was sold the dream

“Lifetime,” he told her. “Triple bottoms, waterless cooking, stainless steel.
These pots will last a lifetime.”
The slick salesman was larger than life when he kissed her
across the street in the school yard
plied her with extras
electric coffee pot, steak knife set, aluminum silverware

She paid on time never saw him again

The Lifetime still shines    The dream has flickered, dimmed, grown
bright again
Not as she’d hoped in Miss Rasch’s home ec. class
Not as she’d wished      or wanted but yet

Looking back a lifetime she is content to have lived

The Nature of Birds and Poets

Like the mother robin the poet must turn the words
tending them so that they will hatch out
peep, peep, peep incessantly to be fed