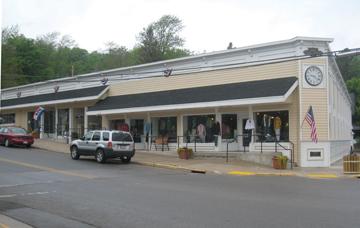 Exterior of the newest On Deck Clothing Company store, located in the Village Exchange building in downtown Sister Bay.

The best ideas are often found by looking to the past.

In Sister Bay, planners, business owners, and residents have been struggling for several years to discover an architectural style that defines and fits the village in hopes of spurring a rebirth in the community.

Mitch Larson, longtime owner of On Deck Clothing Company, with four outlets located throughout the peninsula, hopes he has found it by looking to the turn of the last century.

“I attended all these meetings about creating an identity for Sister Bay,” Larson said, “and it was frustrating because we don’t have one. We’ve got the old Masterfreeze building, a grass roof, a stone village hall.”

But then he took a new look at some old photos of Sister Bay from around the turn of the century. In those grainy, black and white pictures he saw an opportunity in the frontier style storefronts with varying rooflines and eye-catching, open storefronts beckoning passersby.

“Why couldn’t this be our catch?” he asked. “Historic uptown Sister Bay.”

The building held much promise when it was transformed into its most recent incarnation in 2000. That’s when the Richard Rusnack family refaced the deteriorating building and attracted a slate of hopeful retailers, including Winona Knits as an anchor. But Winona went out of business after just a year, followed by a short stint by Door County Home.

After those failures the building largely emptied, as did many other Sister Bay storefronts. With a store located on the north end of the village across from the public marina, Larson found himself asking the same question as many others about the village.

“What can we do to bring it back to life?” he asked.

At the same time, the Rusnacks became more desperate to sell. After a public auction failed to attract a suitable bid, Larson began negotiating and eventually purchased the onetime cornerstone property for $390,000.

He hopes to make the building the cornerstone of a historically driven resurgence, but said his vision would require some flexibility on the part of the village, specifically in regard to signage.

His preliminary plans are to break the façade of the building into separate storefronts, a la the look it once held when owned by his great-grandmother May Bunda. The building’s roots in his family lineage are so deep that most in the community still refer to the property as Bunda’s.

It was once home to the post office and later, under the ownership of May’s son Bill, grew to become a complete department store. Eventually Bill would sell to Jack Bunda, who kept it in the family until selling to the Rusnacks.

It held such importance in the pioneer days of Sister Bay that the Bunda family and their business occupy a special corner of the Sister Bay Historical Society’s display at Corner of the Past Museum.

The property underwent several transformations through the years, twice as a result of major fires. In 1912, a fire originating at the Sister Bay Hotel (now the Sister Bay Bowl) ripped through the corner and devoured what was then most of the town, including the Lerner Clothing Store (now Husby’s) and Bunda’s.

Years later another fire destroyed the reincarnation, leading to a sleek, modern (for the era) look incorporating the style of the time. That look remained until the Rusnack renovation.

Other business owners and leaders in the village have expressed excitement about the property’s new owner, including village board member Sharon Doersching, who chairs the Waterfront Citizens Advisory Committee which is exploring ideas for redeveloping the downtown with the help of Madison-based JJR consultants.

“He’s a local Sister Bay boy, and I love seeing it whenever generations of a family stay in town and run businesses,” Doersching said. “It’s a perfect idea to come forward right now. I actually think [his ideas] could be a look for Sister Bay. This should come forward at our next planning session with JJR.”

But Larson warned he has no golden touch. He emphasized his project won’t be worthwhile if others don’t follow suit. “It doesn’t happen overnight,” he said. “This could take three, four, five years or more to take place throughout the village.”

He envisions not just a single historic building, but a historic domino effect incorporating the Sister Bay Bowl, Husby’s, and other Bayshore Drive properties. Sister Bay, then, would have the style they’ve long searched for.

“We could transform the face of the village,” he said, while cautioning that he does not intend to tell anybody what to do or shove it down anyone’s throat.

Larson has had success with similar renovations of On Deck and the Fish Creek Market on another bustling intersection, as well as with his location on the corner of 3rd Ave. and Jefferson St. in Sturgeon Bay.

“Everything Mitch does is tasteful,” Doersching said.

If other projects fall in place and the village is on board with his plan, Larson said it could be in progress this winter, but it may have to wait until the fall of 2008. The renovation won’t be cheap and it isn’t guaranteed success – after all, nobody else wanted the parcel for a reason. Worst-case scenario, “it will look good, in the meantime,” with window displays, benches, and his store in place.

Plans and ideas are a necessary component to economic revitalization, but ultimately, some entrepreneurs have to go out on a limb and take a risk. It wasn’t long ago that few businesses wanted to be on Madison Ave. in Sturgeon Bay or in the urban centers of America’s cities. After a couple cornerstones stepped forward, neighborhoods like these became hotspots.

In Sister Bay, Larson said, a few people will have to step forward and do something and invest in the community.

Mike Flood came forward with a conglomeration of ideas for a plan for the village waterfront last spring, now Larson has put down a financial foothold. With the village poised to make a $5.5 million investment in the waterfront, and the state coming to resurface Bayshore Drive and improve sidewalks and lighting in 2012, the time appears ripe for the business and financial community to step forward as well.

Grand plans aside, Doersching, who in her youth manned the soda fountain at the store for Bill Bunda, had a simpler request.

“I told him I want him to look for the old soda fountain.”