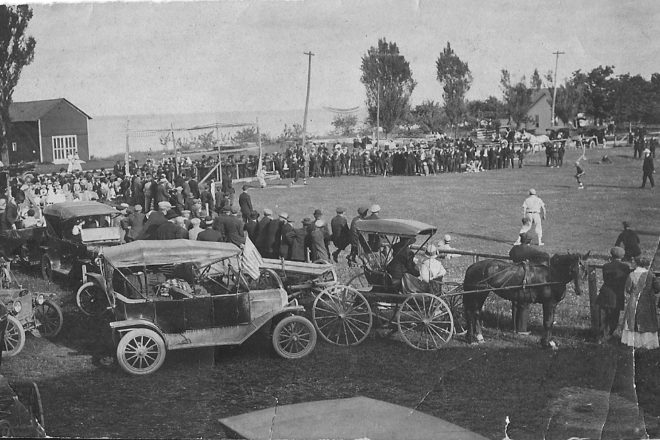 Baseball has been central to community identities since the county’s early days, including this early-20th-century baseball game in Baileys Harbor. Submitted.

Each summer Sunday, hundreds of people gather at ballparks around the peninsula to take in an amateur version of America’s pastime. On Sunday, Jan. 26, 1 pm, at Door County Brewing Co., Peninsula Pulse editor Myles Dannhausen Jr. will lead a free panel discussion about baseball’s enduring hold on Door County as part of the Door County Reads programming, which will kick off Jan. 25.

Joining Dannhausen will be Door County League president and former player Rick Gigot and Sister Bay Bays veteran Tucker Emerson to discuss the league’s history, its most important players and teams, and why the league continues to be such a large part of life for area residents.

“People don’t pay to watch grown men play basketball or golf or other sports, but they show up in droves to watch County League games,” Dannhausen said. “Up here we take it for granted, but it’s a bit of a local phenomenon, and for many families, the league is a source of great pride.”

Gigot starred in the league for the Maplewood Mets before joining the league’s administration, and Emerson has starred for the Sister Bay Bays for two decades.

To find out more about this and other Door County Reads events, visit DoorCountyReads.org.