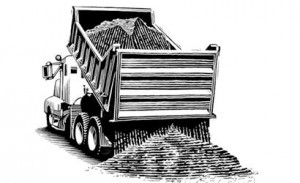 While highway departments throughout the country are scrambling to keep their roads safe and ice-free – and paying a steep price to do so – Door County is sitting relatively pretty.

This winter has brought some of the heaviest snowfall and coldest temperatures in years, and consequently, the greatest demand for salt and sand for roads in recent memory. Cities and counties without enough reserves are now embroiled in a bidding war for salt supplies, with prices approaching $70 a ton, more than 70 percent above pre-season prices.

“We’re in reasonably good shape as long as our vendor can get us the product,” he said. “We’ve got about 800 tons to go and the state is getting another 100 tons.”

Getting it trucked here isn’t guaranteed, however. The county gets its salt from Cargill Salt out of Gladstone, MI, and with heavy demand nationwide supplies are backed up. Kolodziej said the county is currently using salt faster than it’s coming in.

“Some days we have two to three loads arrive, some days none,” he said. “It’s a three and a half hour drive from Gladstone, and they only have so many trucks to meet all the demand.”

“We purchase a guaranteed amount at the beginning of the winter season that the vendor is obligated to provide us,” he said. “That price is locked in around $36 a ton.”

Each year the county bids with the state for salt to earn greater bidding leverage. In deciding how much to guarantee Kolodziej looks at historical consumption and averages it out to ensure there is an adequate guaranteed supply on hand.

This year the county had a guaranteed supply of 3,500 tons plus a 500-ton reserve.

Kolodziej doesn’t anticipate any snags with sand, as some areas have faced. The highway department produces the sand in two county mines, one just south of Sturgeon Bay and another in Union. The sand is mixed with 10 percent salt to help with melting and to stop the sand from freezing.

Other areas aren’t as fortunate as Door County. Fond du Lac County is experiencing a salt shortage and has had to conserve, and even called Door County for help.

“They heard we had dibs on the salt up in Gladstone and were hoping we could spare some, but we’re not ready to do that yet,” Kolodziej said.

When levels get low highway departments are forced to cut down on salting, often limiting dumping to hills and dicey stretches. Kolodziej said the state has already ordered conservation measures on state highways, cutting back from the standard level of 300 pounds per lane mile.

While there should be plenty of supply available to the county, Kolodziej said there is a chance salting would have to be cut back.

“If the vendor remains slow in getting the salt here, we would have to enact conservation measures to keep supply on hand.”