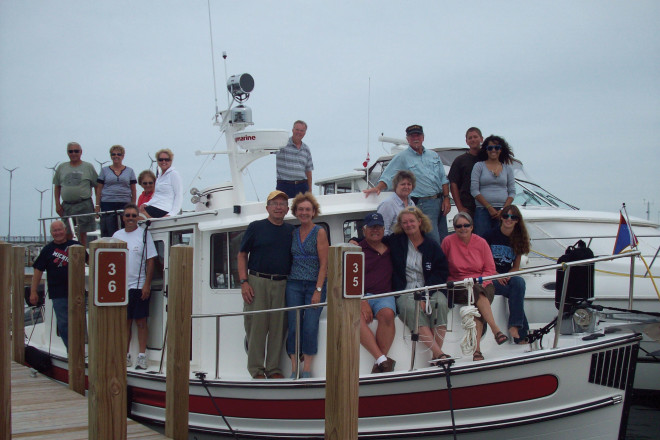 Water Rat, the friendly little extrovert in The Wind in the Willows, said, “There is nothing – absolutely nothing – half so much worth doing as simply messing about in boats.” It’s a shame he didn’t live in Door County, so he could have joined the Door County Sail & Power Squadron (DCS&PS) and found 90 people who totally agree with his philosophy. 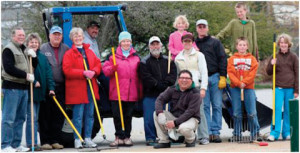 Of course, the DCS&PS, one of 445 across the United States, does a lot more than mess about in boats. Chartered in 1954 as the Sturgeon Bay Power Squadron, the name was changed in 2001 to reflect its countywide membership. Its primary objectives are community service, continuing education and social activities.

Door County’s squadron is part of District 10, which includes 11 squadrons in Wisconsin and Minnesota, and is also associated with the national organization’s 43,000 members. United States Power Squadrons® was founded 98 years ago by men in the Boston Yacht Club. Its first treasurer, Charles F. Chapman, was the author of Chapman Piloting & Seamanship, still considered the boater’s “bible.”

The DCS&PS examiner also makes recommendations and discusses specific issues to ensure safe boating. Owners whose boats pass the safety check receive a check-up sheet and an inspection sticker that assures Coast Guard inspectors that all is well. They also get a discount on boat insurance. Free vessel safety c 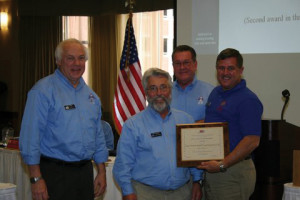 hecks will be available throughout the summer at marinas in Sturgeon Bay, Egg Harbor, Baileys Harbor and Fish Creek. Boaters should check with their marina for exact dates.

The DCS&PS is involved in service partnerships with the Door County Maritime Museum, Quarterdeck Marina and the Sturgeon Bay Yacht Club for projects like the annual Classic & Wooden Boat Festival and waterfront cleanup at Sunset Park. The squadron also works with local fire departments to demonstrate the correct use of flares and how to properly use a fire extinguisher to put out various kinds of fires onboard.

Before his presidential days, when Franklin D. Roosevelt was assistant secretary of defense, he utilized the U.S. Power Squadron’s instructional program for training the Navy prior to World War I. Education of sailboat and powerboat owners is still a major purpose of the Door County Sail & Power Squadron. In 2006 and 2008 it was named “First in Nation” for Outstanding Educational Achievement. Jeff Rosenfeld of Egg Harbor is educational officer for the local squadron. Bob DeNoto of Sturgeon Bay is educational officer for all of District 10, as well as serving as a vessel safety examiner.

ABC-3, America’s Boating Course, is offered to the public at a nominal fee once or twice a year. It has become increasingly popular in Door County, as Wisconsin’s law now requires that a person born on or after January 1, 1989, who is at least 16 years old, may operate a motorboat only if he or she has completed a boating safety course accepted by the Wisconsin Department of Natural Resources. Passing the eight-hour course meets that requirement. 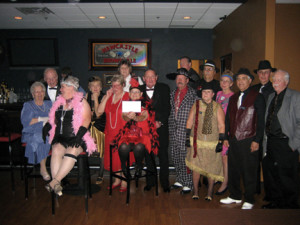 Nationally, more than three million boaters have benefited from ABC-3.

The basic course, ABC-3, can be followed by five advanced courses:  Seamanship, which covers the “rules of the road” such as the meaning of lights and horn signals; Piloting and Advanced Piloting, which teaches how to read paper charts and use them to chart a course and figure distances using coordinates and other tools (the methods Columbus would have used); JN, which teaches how to navigate by the sun and stars; and N, which includes more advanced navigation, plus the use of GPS and other electronics, as well as offshore navigation.

In addition to a series of free two-hour seminars on a variety of subjects from boat handling to using marine radio, there are also five elective courses, including Weather, a Marine Electronics three-course series, Engine Maintenance, Sail, and Cruise Planning. The Weather course, for

example, is described as a must-have course to ensure the safety and comfort of those who venture out on the water. It covers how weather systems form, behave, move and intersect with one another, as well as the availability on the Internet of all sorts of weather reports and forecasts. Although squadron members say understanding weather is not like brain surgery, the course is, in fact, taught by Dr. Alan Wentworth of Sturgeon Bay, a retired brain surgeon whose interest in weather began with the photos he took f 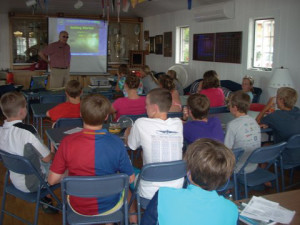 rom planes when he was a flight surgeon.

John Reichmann of Green Bay and Ellison Bay says that Door County has first-class boating opportunities, but the waters can be unforgiving. “As a relatively new boater, I know that the power squadron’s educational courses, such as Seamanship, Piloting, Weather and Maintenance are giving me a head start on what I need to know before venturing out.”

All courses are open to both DCS&PS members and the public. They are constantly updated and improved. Cruise planning, for example, is being revamped by the national organization to reflect needs of different parts of the country, such as the Great Lakes, Florida and the Mississippi River.

Along with the formal education courses, DCS&PS members also offer informal mentoring, being available to go out with inexperienced boaters to help them “learn the ropes” – or the “lines” in maritime language.

After all that community service and continuing education, DCS&PS members have FUN – dinner meetings, a fitting out party at the beginning of the boating season (one had a ‘50s diner rock ‘n roll theme), an annual weekend cruise to Menominee by about 30 members, a summer picnic with a hotly-competitive wiffleball game, a season-ending “lay up” dinner and a jolly holiday party. (In the past, attendees were asked to bring a pound of something to be raffled off, sight unseen, as a fundraiser for their educational and community service programs.)

Last summer, the DCS&PS hosted 150 boaters from the other 10 squadrons in District 10 for a festive, informative, fine-food-filled weekend in Sturgeon Bay. Activities in 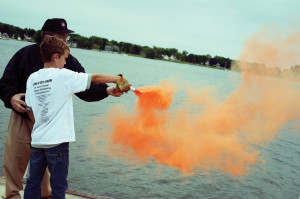 cluded a tour of the Mobile Bay Coast Guard cutter, a dock walk, an art crawl and a live band.

About 20 squadron members are DC Cruisers, who do more extensive cruising each year, with planning beginning in February. In 2011 they traveled to Grand Traverse Bay. “Cruising with DCS&PS is an adventure in building friendships, camaraderie and exploring new places. We always have a great time and lots of laughs,” say Jerry and Michelle Anderson of Sturgeon Bay.

Instructors for the Cruise Planning course are Andrea and Jim Jauquet, a teacher and 18-wheel driver, respectively, who 15 years ago took their 35-foot sailboat to the Mediterranean and left it there, spending each summer since in a different port. They share such knowledge as the requirements for going into foreign ports and the fact that eggs coated with Vaseline won’t spoil for weeks in tropical weather.

Although JoAnne and Jeff Rosenfeld of Egg Harbor are “fair-weather boaters,” venturing out only when the forecast is sunny and warm, they say that the entire Door County boating community has helped them go from novices to feeling comfortable on their boat.

For additional information about the Door County Sail & Power Squadron’s courses and activities, contact JoAnne Rosenfeld at (920) 559-7530 or [email protected] or visit the DCS&PS website, www.usps.org/door/.