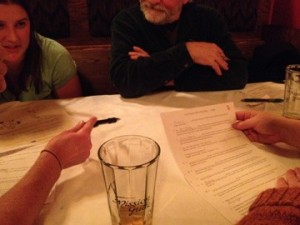 Who was the “First Lady of Song?”

What is the name of the town in It’s a Wonderful Life?

Those were just a few of the questions that stumped five Peninsula Pulse staffers, who participated in last night’s Door County Secret Santa’s trivia fundraising event at Mission Grille in Sister Bay. (Read on to view the answers.)

Over martinis, wine and bruschetta, teams pondered the lines of children’s books, scents of various spices and pictures of characters in Christmas movies. They laughed, exercised their brains. (We won second place!) 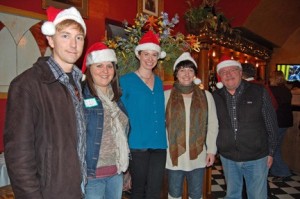 “The idea started with a Hallmark movie,” explained Jane Lee, speaking into a microphone and donning a Santa hat as contestants settled in their seats and put on their thinking caps. “In the movie a poor man gave to townspeople secretly each year. The first year we helped one family with heating costs. There are so many people in need in the community. Last year we helped 11 families. This year our goal is 20 and right now we have enough to help 17 [families].”

The Lees organized the night of trivia – featuring a broad range of fun, yet challenging categories. Players could ‘buy’ answers for $1 a piece and browse various raffle items from local artists and businesses between rounds of trivia.

For more information about Door County Secret Santa call 920.421.1544 or look them up on Facebook.

The answers we should have known! Shucks!

Who was the “First Lady of Song?” Ella Fitzgerald

What is the name of the town in It’s a Wonderful Life? Bedford Falls