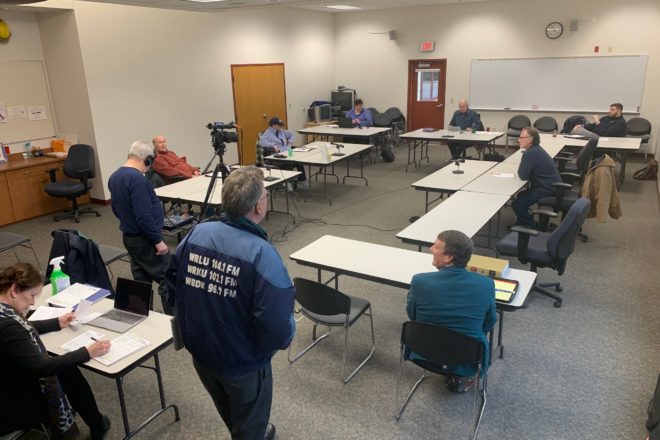 The Village of Sister Bay practices smart social distancing at a special meeting in March. Photo by Myles Dannhausen Jr.

On Monday, the County of Door declared a state of emergency in hopes of stemming the spread of the COVID-19 virus, and Sister Bay followed at a special meeting tonight.

There has not yet been a positive test for the virus in Door County, but few people have been tested.

Sister Bay Village President and Door County Board Chair Dave Lienau said the resolution is meant primarily to send a message to residents and businesses to adhere to Centers for Disease Control suggestions to not gather in groups of 10 or more. Declaring the emergency “shows the seriousness of what we’re trying to do,” he said.

Nate Bell said, “This resolution is the most serious thing I’ve seen come before the village board” and argued for a 60-day sunset on the measure rather than an indefinite timetable, which the board approved. Lienau said he’s confident local businesses and residents will come together to do this voluntarily for their neighbors, but the action gives the village powers to enforce it if people violate it.

The village will ask its bars and restaurants to move to takeout and delivery only for the moment. Many have already made the change.

Earlier Monday Gibraltar School announced it will remain closed through May 4.

Sister Bay Village attorney Randy Nesbitt explained that the declaration powers “allow a municipality to enact a declaration to do whatever is necessary to protect lives, including [the] right to assembly.” He said the powers have been available in Wisconsin since WWII but are rarely used.

Those powers could include the right of the village to shut down an assembly if officials see “way too many people, way too close together.”

“This is a big deal in a country where we are guaranteed a lot of freedoms,” Nesbitt said. “But this is the kind of thing you can’t do half way.”

“It’s important that everyone take this seriously,” said Lienau, who is also chair of the Door County Board of Supervisors. “We need to do everything we can to get people to follow the spacing … There’s not a question of if it’s going to get here – it will. The question is, how do we as a community respond to that and keep it in check?”

Lienau also cautioned that the disease is not the “elderly disease” it has been characterized as.

“Yesterday, a 19-year-old person died of coronavirus,” he said. “In Colorado, a 42-year-old man died. The youngest person is a newborn baby. It’s not an ‘old person’s disease.’ We have to stress to all of our residents and visitors how important it is to slow it down. If people are not complying, we may have to get involved with the requirements of this emergency declaration. We hope people comply voluntarily.”

Board member Rob Zoschke said he has had visitors tell him that Door County is at low risk, so they’re coming up here to get their condo ready. He suggested getting a message out to encourage them to stay where they are, hunker down at home, “and we’ll do the same and be ready to serve you later this summer.”

Denise Bhirdo wondered whether the county is perpetuating the problem by not pushing that message.

Sister Bay/Liberty Grove Fire Chief Chris Hecht said it would be nearly impossible to police who may come to Door County.

“If we’re going to try to limit the number of people who try to come here, it’s a nice idea, but it’s not going to happen,” he said. “I know people who are coming here already, including people from other areas who have been told to quarantine who are coming to Door County to spend their quarantine.”

Hecht said efforts would be better geared to handling the influx safely.

With the resolution, the village also voted to close public facilities, including the playground, sports complex and village hall to discourage large gatherings. The village also canceled all nonessential village and committee meetings.

The Door County Board of Supervisors declared a state of emergency Monday afternoon.

The county canceled all travel for staff, and it will pay some key staff members to stay home to quarantine themselves so there are backup staff members available if other key people get sick. Sister Bay voted to do the same.