When many people first think of firefighters they probably think of those hunky guys from movies and calendars: 20-something men with chiseled jawlines and abs a quarter could be bounced off of.

While northern Door County’s volunteer departments have their share of hunky firefighters, the majority of them are just regular Joes and Janes. They’re a slowly diminishing group of people who, regardless of physique, age, or capability, put at least some portion of their time towards making sure their community is safe. 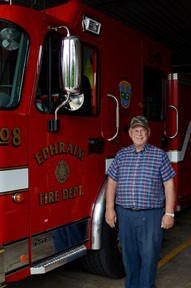 Ephraim Fire Chief Niles Weborg says, “it’s a difference of day and night” between how fires used to be fought and how they are now. Photo by Katie Sikora.

“The lights and sirens and the big red truck are fun, but truthfully we don’t do a lot of that,” says Chris Hecht, chief of the Sister Bay/Liberty Grove Fire Department and interim chief for the Gibraltar Fire Department. “A lot of our calls are just assists to people…really simple, customer service kinds of things. And I like that customer service aspect of it. I like helping people.”

Hecht became a volunteer firefighter in 1985 when he joined the department on Washington Island. The people he worked for and lived with on the island were involved with the department, and they brought him into the fold.

Hecht says the departments’ greatest recruiting tools are word of mouth and generational recruitment. Several of the volunteers he has now are among the third generation of their firefighting families.

But as good, year-round jobs continue to dwindle and many children decide to stay outside of Door County after college, Hecht believes families’ firefighting legacies may begin to become a thing of the past.

“I have a teenage son and a teenage daughter, and as much as I’d love for them to live in Door County when they get done with college, realistically it’s probably not going to happen,” he says. “So we start to lose that generational component as we start to lose our young people.”

Over in Ephraim, Niles Weborg has served as a volunteer firefighter for 52 years, almost 33 of which he’s spent as Ephraim’s fire chief. He says a lot has changed since he married the fire chief’s daughter and inherited the fire station right along with her.

“It’s a difference of day and night,” says Weborg. “We used to go to the station and drink a couple of beers and see who could tell the best story and that was fire meeting.”

Now the beer’s out of the station and volunteer firefighters are constantly asked to undergo more training – over 90 hours of entry level training alone – and conform to more regulations. 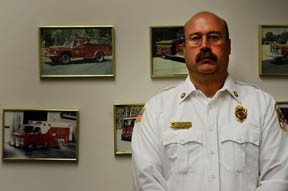 Ephraim Fire Chief Niles Weborg says, “it’s a difference of day and night” between how fires used to be fought and how they are now. Photo by Katie Sikora.

“Something that might be a deterrent to volunteerism is what kind of training firefighters have to have, what kind of gear they have to wear for protection, and having to wear a pager all the time,” says Weborg.

While the training is more demanding and may scare off some potential recruits, Weborg says it’s made the department and its volunteers better than they were back in the good old days.

“I wouldn’t want to fight fires how we used to,” he says.

In order to combat falling volunteer numbers, the Ephraim, Gibraltar, and Baileys Harbor departments formed the Mid Door Fire Association. They use the same pager frequency and respond to each other’s calls to make sure that there will be enough firefighters on scene at each incident.

All of the Northern Door departments are also linked through mutual aid agreements which allow them to request additional equipment and manpower from each other as needed, and many of them are currently considering forming a fire district that would combine several of the departments underneath one administration.

Baileys Harbor Fire Chief Brian Zak isn’t a big proponent of the fire district, partially because his department’s numbers have actually been on an uptick in recent years. But he’s not sure how long it will last.

“Do I see it staying that way? I can’t tell you that,” he says. “It could go the other way in a couple of years.”

Zak is another of Door County’s generational firefighters. His father served on the department and became assistant chief before retiring after 37 years. Brian joined the department right out of high school, and his son AJ has now joined on as well.

Zak says potential recruits don’t just jump right into entry-level firefighting classes. They can come to meetings, meet the rest of the department, inspect the equipment, and go on calls as observers before they set foot in the classroom.

“You’ve got time to grasp what’s involved prior to taking the classes,” he says. “Most people know what it’s about going in. The worst thing you can find out is that you don’t like it.”

And while there’s a need for volunteers who can actually fight fires, it’s not the only role that departments need to fill.

“Anybody that’s out there, be it male or female, young or old, I can use,” says Zak. “We need truck drivers. We need people who can handle the paperwork.”

Hecht recognizes that families and careers keep those in Door County pretty busy, but he agrees that any amount of time a volunteer can commit to their fire department is enough, as long as they’re willing to follow through.

“What we want is someone who does what they say they’re going to do and tries their hardest,” he says. “I have a job for anybody and everybody as long as they’re willing to do the job.”

Hecht has one firefighter, Bill Randall, who retired to Door County about five years ago in his mid-sixties.

“He came to us and said I’d like to get involved in your community,” says Hecht. “He knows he’s not going to go into a burning building. His strength isn’t what yours or mine is, but he’s a key player in this department.”

Randall, in fact, became so important to the Sister Bay/Liberty Grove department that he was named Firefighter of the Year two years ago.

“He makes that much of a difference here, because he does what he says he’s going to do,” says Hecht. “Those are the kind of people I need.”

Hecht is currently looking into bringing in a former human resources director to map out a new recruitment strategy for the department and even out the often-unpredictable ebb and flow of his volunteer numbers.

He says there may eventually be some full-time firefighters on staff to support the volunteers in Northern Door, as there are currently in the Sturgeon Bay Fire Department, but the volunteer aspect of the departments will likely never go away.