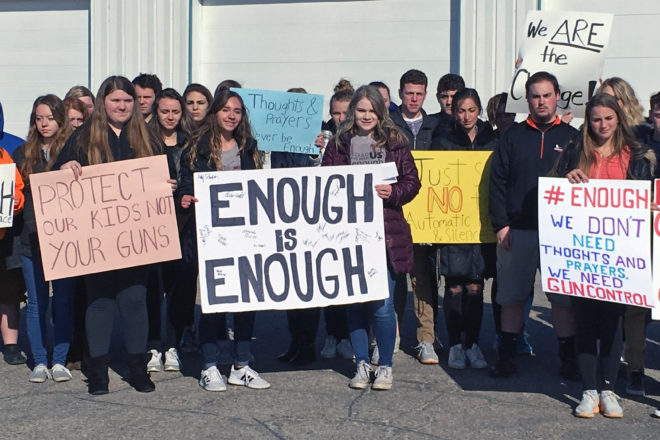 Hundreds of Door County students joined in the nationwide walkout March 14 to protest gun violence and memorialize the victims of the Feb. 14 shooting at Marjory Stoneman Douglas School in Parkland, Florida.

Students at Sturgeon Bay, Gibraltar, Sevastopol and Southern Door took part. At Gibraltar approximately 130 students in grades 7 – 12th grade walked out of class and gathered around the school’s flagpole. They were joined by several teachers and about a dozen community members, where they stood in silence in the cold for 17 minutes, reading the name of one of the Florida victims each minute.

Gibraltar secondary principal Gereon Methner said he was proud of how the students handled themselves.

“Gracie Richards came to me about three weeks ago to discuss the idea,” he said. “She said, ‘We’d like to work with you to accomplish this.’ As an administrator you love to hear that.”

Richards, a senior, said the following in a statement released by the school: 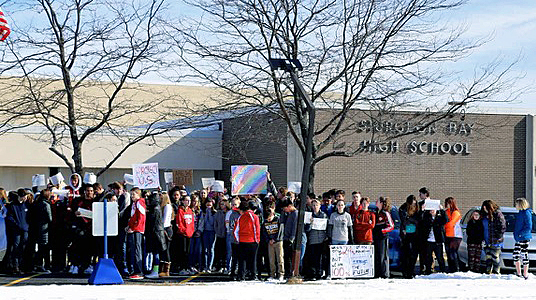 Emily Salm, a high school art teacher who helped Johnson organize the event, said in a statement that it was not really a protest.

“I hope, as a civilization, we do not have to protest violence,” she said. “We are walking out for 17 minutes for three reasons:  to mourn the death of another 17 children, to suggest our civilization must admit that abuse and violence of any kind can no longer be tolerated, and to declare that Door County will be the model for acceptance, diversity and peace.”

Methner said the students would not face punishment for the walkout.