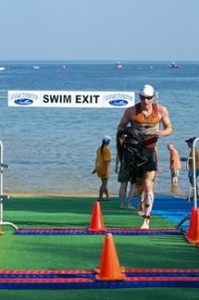 The event had already contributed $10,000 to 11 other local non-profit organizations this year. This brings total charity donations from the event to $270,000 during the past eight years.

“We are honored to be part of this wonderful event. It ties in perfectly with the Y’s mission of promoting health and wellness in Door County,” said Dan Powell, CEO of the Door County Y.

The seventh annual swim-bike-run event took place the weekend of July 21 –22, 2012, with a capacity crowd of 2,000 athletes competing. According to race director Sean Ryan, “the growing popularity of the sport combined with a strong reputation for the event helped it reach capacity and achieve record proceeds for its charity partners.”

Based on participant surveys, this year’s Door County Triathlon generated an estimated 2,000 lodging nights and nearly $600,000 in tourism spending in Door County.

“The triathlon has a very positive economic impact on the county’s tourism industry,” said Jon Jarosh, director of communications & public relations for the Door County Visitor Bureau and a member of the triathlon’s non-profit board of directors.