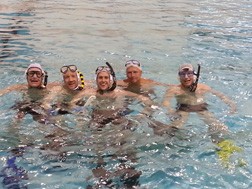 A five-man group from the Door County YMCA’s underwater hockey team won the four-on-four tournament in Milwaukee on April 6 & 7. The team faced and defeated a team from Michigan State in the finals – a rematch from the Midwest Championships in January. The four-on-four format was a challenging tournament style, as underwater hockey games are traditionally played six-on-six, with up to four extra players available for substitutions.

In this game, not only were there fewer players in the water to cover the court, but there was only one player available for substitution. This arrangement called for a higher level of athleticism and skill, along with creating a different strategy of play.

The underwater hockey team meets on Friday at 6:30 pm at the Sturgeon Bay YMCA and welcomes new members of all ages.