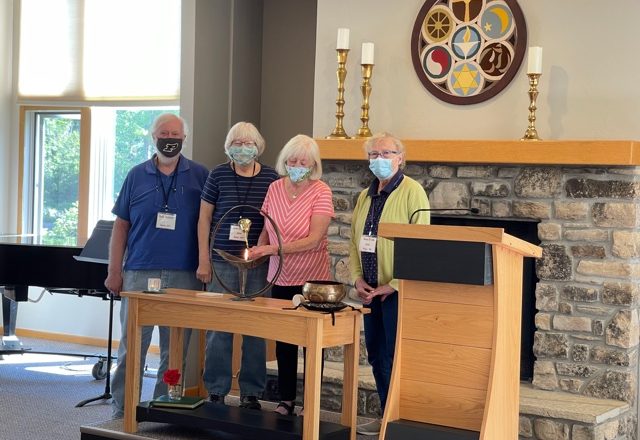 Founding members of the Unitarian Universalist (UU) Fellowship of Door County demonstrate the lighting of the chalice that’s done at the beginning of their weekly services. The flaming chalice is the official symbol of the UU church. Originally a sign of refuge for those escaping Nazi persecution, today the symbol holds meanings as varied as the thousands of UU congregations that light chalices at the beginning of their weekly services. From left are Dave and Karen Studebaker, Lynn Lees and Helene Di Iulio. Photo by Debra Fitzgerald.

An ad appeared in a Door County newspaper 25 years ago that asked those who were interested in establishing a church to call. The ad bore a photo of a flaming chalice, the official symbol of the Unitarian Universalist (UU) church.

People such as Door County resident Helene Di Iulio answered the ad, as did Lynn Lees. They would be among the 32 people who attended the first Sunday service of the Unitarian Universalist Fellowship of Door County (UUFDC) in 1996.

“We were instantly this coalesced group of like-minded people who had finally found each other,” said Cyndy Stiehl, who was also among those who attended that first service.

Two years later, the congregation would be admitted into the Unitarian Universalist Association, the central organization for the UU religious movement in the United States and its 1,000-plus member congregations. Today, the UUFDC has 95 members, and on any given Sunday, 60-70 people attend services.

The congregation initially met at the Meadows in Scandia Village before purchasing a building on Koessl Lane in Sister Bay. With a steadily growing membership and the need for more space, however, the congregation sold the Koessl Lane building and purchased its current home at 10341 N. Water St. (Hwy 42) in Ephraim.

A group of UU members gathered there last week for an interview on the occasion of their 25th-anniversary celebration. They described themselves by what they are – inclusive, nonjudgmental and active in social-justice causes – rather than what they’re not, which would be any of the organized religious belief systems: Catholic or Protestant or Jewish or Buddhist or Mormon.

But that doesn’t mean the UU members don’t hold or honor belief systems drawn from many other faith traditions. Door County UU Valerie Murre-Schlick grew up in the Moravian church; Di Iulio had been raised a Lutheran, Lees a Catholic. Perhaps they all still hold some of those religious beliefs. The Door County fellowship even has a couple of atheists.

But the bonds that unite the congregation, and UUs across the globe, are shared values rather than shared religious beliefs. Those values are represented by seven core principles: belief in the inherent worth and dignity of every person; justice, equity and compassion in human relations; acceptance of one another and encouragement to spiritual growth; a free and responsible search for truth and meaning; the right of conscience and the use of the democratic process within the congregation and society at large; the goal of world community with peace, liberty and justice for all; and respect for the interdependent web of all existence of which humans are a part.

“There is no dogma,” said UU member Trish Black, who became a member of the UUFDC with husband Jim in 2015. Both had been practicing Catholics until their oldest son stepped out of the closet, and their priest at a congregation in another state told them their son was “disordered.” That sent them on a spiritual quest. They discovered the UUs and became members of the Door County fellowship once they moved to the peninsula.

“For the first time, what I believed, what I thought and what I felt all aligned,” Trish Black said. “I’m deeply grateful to our son for waking me up.”

One person’s wake-up call can be another’s fringe movement.

“When we hit Door County, it was fringe,” Lees said, drawing laughter from the rest of the group. That’s not something that changed overnight. When Gills Rock resident Bob Lindahl began attending the UU services, he at first considered it a “guilty pleasure” until he became a member in 2008.

“I liked the people, the spunk, their willingness to tolerate each other despite differences,” said Lindahl, who serves as treasurer of the fellowship’s governing board.

The UUFDC does not have a pastor. Instead, its program committee schedules Sunday guest speakers who deliver the sermon.

“We call it a message,” Lees said.

The Sunday message may be delivered by a religious leader from another faith. Readings could come from any of the great religious books or from Native American readings or Buddhist texts. And because UUs don’t draw lines between the secular and sacred, the topics of Sunday messages address a wide variety of content intended to touch the heart and stimulate the mind.

Pastor Dawn Volpe from the Ephraim Moravian Church delivered the Sept. 5 message about the changes thrust upon the world from the global pandemic. Professor Claudena Skran is scheduled to talk about “Meaningful Travel after COVID-19” on Sept. 19; and Fox Valley UU Rev. Karen Sandberg is scheduled to deliver the Sept. 26 message on “What Happens When We Die?”

Sara McKillop has worked for the UUFDC for four years. As the congregation’s fellowship administrator, she’s the only full-time employee. What drew her to the job and keeps her engaged and committed are the ongoing opportunities for intellectual, spiritual and personal growth.

“I really missed college, and being here feels like you’re on a college campus,” she said. “It fills your soul in a 360-degree kind of way.”

The Unitarian Universalist (UU) Fellowship of Door County will begin celebrating its 25th year with a special service on Sunday, Sept. 12, beginning at 10 am. The congregation’s history and founders will be honored; Alan Kopischke will read sermon excerpts from founding member and UU minister Rev. Robert Clarke; and concert pianist Jodie DeSalvo will provide special music.

Who Are the UUs?

Each UU congregation is autonomous, with congregational leaders setting their own priorities and choosing their own ministers and staff. Congregations vote for the leaders of the UUA, who oversee the central staff and resources. The UUA supports congregations in their work through opportunities in training, curricula, shared services and the coordination of social-justice activities.