The Door County Visitor Bureau markets to a lot of audiences – cyclists, foodies, lighthouse enthusiasts – and Communications Director Jon Jarosh is the first to say that no audience is the same.

Like the Lesbian Gay Transgender and Bisexual, or LGBT, audience. The visitor bureau has targeted that market for years and on Saturday, Sept. 21, will host a commitment ceremony for same sex couples, hoping to boost business during the slower Door County fall.

“The LGBT market has been a market for us we’ve marketed to fairly successfully over the last couple years, so it’s by no means new,” Jarosh said. “This is kind of a natural progression.”

Five couples are signed up for the event, which will be officiated by the Rev. Richard Feyen of Hope Church of Christ in Sturgeon Bay. The couples are all from Wisconsin, though none are from Door County, and will bring a small number of friends and family along. Twenty-five Door County businesses and organizations have signed up to offer discounts to participating couples. 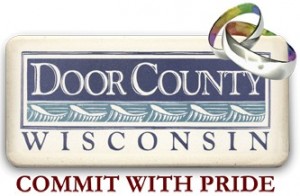 Same sex marriage isn’t legal in Wisconsin, it was banned in the state constitution by a 2006 vote, but that doesn’t mean it’s been out of conversation. In June, the U.S. Supreme Court ruled that same-sex couples are entitled to federal benefits and left allowing same-sex marriages up to the states. Thirteen states, including Wisconsin’s neighbor Minnesota, have legalized same-sex marriage.

But Jarosh said the DCVB is not making a political statement with this event, simply marketing to a well-established tourism audience.

“There are cities all over the country and all over the world for that matter that have specific budgets to market to the LGBT travel community because of what they bring to the table as far as higher than normal disposable income, and the propensity to travel,” Jarosh said. “When we look at what we have in Door County, a lot of those sorts of things, the arts and the cultural stuff, is what that particular market enjoys and appreciates.”

Marketing to LGBT audiences is a well-known concept even beyond the tourism industry, according to Third Avenue Playhouse artistic director Robert Boles.

“I know this is something not new in terms of promotions and ads,” Boles said. “It may be new to Door County but it’s not new in general. There’s a lot of money to be made, you know, and businesses have not ignored that fact… [Some advertisements are] cleverly made to look that way, so if you’re looking at it one way they’re married and in another way they’re two buddies having a drink.”

“We’re really more of a destination for committed couples,” he said. “We don’t have a singles scene for the LGBT community, so we certainly don’t market ourselves in that way. Most of the marketing we do to that particular niche market explaining and selling what we are – we’re really a great destination that offers some wonderful attributes as a destination to committed couples. We thought this [commitment ceremony] certainly went along those lines.”

LGBT-friendly businesses are listed on sites such as purpleroofs.com, Orbitz and Travelocity to help direct tourists to welcoming locations. Some Door County businesses are included on those sites.

As likely expected, this event doesn’t come without controversy – just look in the letters to the editor section in the last issue of the Pulse and read “Event Goes Against the Bible,” in which the writer addresses Feyen directly.

Feyen’s heard such criticism before. Hope Church publicly accepts and affirms people of all sexualities, and when Feyen writes for the Door County Advocate’s “Faith Perspective” column, he often gets negative feedback.

“I think [this event] celebrates the love between two individuals and that’s what’s important,” Feyen said. “In my eyes, marriage before God and before the public is commitment between two people, and the legal side is a big plus and would be a big benefit for a lot of people.

“We see [recognizing same sex couples] as a witness statement, saying this is truly what we believe that the Bible teaches, that homosexuality is a fact of nature, people are born that way, they don’t choose it. It’s not a kind of behavior one would choose, like whether I choose to go swimming or not. We don’t choose who we are attracted to sexually, it just is. And to refer to that as abhorrent is just beyond my ability to understand.”

Jarosh said the DCVB has gotten mostly positive feedback, aside from some couples who said they wouldn’t participate in a ceremony until they could legally be married.

PFLAG, or Parents, Families, Friends, and Allies of LGBT, helped spread the word by sending flyers with their newsletter and handing them out at a PRIDE event in Green Bay. Door County PFLAG president Richard Gardiner said the ceremony will help strengthen the community of LGBT and their friends and family.

“It just gives them the opportunity to feel supportive of each other, supported by us, and that we’re in agreement that what they’re doing is right for them until the state agrees they can have same sex marriage,” Gardiner said.

The Third Avenue Playhouse in Sturgeon Bay is giving couples discount cards, usually $25, that give cardholders 20 percent discounts on all ticket sales for the rest of the year, as well as donating a portion of ticket sales to the local PFLAG.

While the playhouse regularly participates in promotions and donates to local charities, Boles said he was happy to be a part of this event.

“I think if anything it’s going to give a positive high profile to the LGBT community, which is a great and wonderful thing,” Boles said. “The whole gay and lesbian community has been marginalized for years. It’s only been in the last 10 years or so that things have reached a point that people can come out of the closet, can openly participate in these things, and that you have instances like the visitor bureau sponsoring events like this, which they would not have done 10 years ago.”

While the goal is to get more people to visit the county, the DCVB recognizes that supporting the LGBT tourism market works two ways. More LGBT visitors may find their way to the peninsula, and the visitors may feel more comfortable while they’re here.

“It’s the concept of supporting committed couples being together, and recognizing that,” Jarosh said. “Same sex marriage isn’t legal in Wisconsin at this point in time, but I think the fact we’re making an effort to reach out to this particular segment and doing something in a positive way, I think they appreciate it.”