2014 will be a year of sustainability for the Door County Visitor Bureau (DCVB), as the organization focuses on boosting tourism for the long term while protecting the environment.

“What I would love to tell people is ‘Please come and enjoy Door County, use it as much as you’d like, but please leave it like you found it’,” said Jack Moneypenny, DCVB president.

To kick off the sustainability initiative, the DCVB will install two electric car-charging stations in its parking lot this spring. The total cost of the project is approximately $7,000, with help from grant money and partner Sturgeon Bay Utilities. 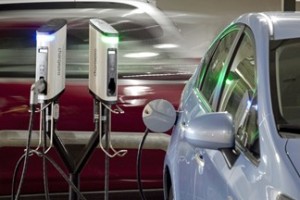 The DCVB is charged with marketing the county to potential tourists. In 2013 it spent about $1.7 million on advertising to markets around the Midwest.

Moneypenny focuses on reaching out to niche markets, such as silent sports athletes, motorcyclists and foodies, and he thinks electric car owners and eco-conscious travelers are an untapped audience. He said the DCVB received about six calls this fall from people asking about electric car-charging stations in the county.

Moneypenny’s vision doesn’t end at the DCVB parking lot. He hopes businesses and community associations around the county will install charging stations and create a network so visitors could find a place to charge their car batteries wherever they stop.

“If we can create a network of these charging machines throughout Door County then all of a sudden there’s a wealth of opportunities for people who drive electric vehicles to come to Door County,” he said.

At the end of August, there were 1,200 registered plug-in electric cars in Wisconsin, according to Michael Moore, senior renewable and product services coordinator for Wisconsin Public Service. He estimated 3 to 3.5 percent of new car sales in Northeast Wisconsin will be electric vehicles in 2014, but said the vehicles are more popular in Chicago and Minneapolis.

“People are beginning to use these vehicles for more than just daily commutes to work,” Moore said. “As people get access to charging they can take their plug-in electric vehicles and go on vacation.”

“Part of the issue is access to charging, so you talk about Door County travelers and the visitor bureau putting in charging stations, that’s actually an excellent idea because between Milwaukee and Green Bay there are very few,” Moore said. “People are beginning to use these vehicles for more than just daily commutes to work. As people get access to charging they can take their plug-in electric vehicles and go on vacation.”

“For bigger cities, I believe [the electric vehicle market] is going to continue to grow,” Herdina said. “When people are running long distances, like in the rural areas when the commute is longer and they have fewer short trips, the electric cars seem to [get] less interest.”

Herdina said hybrid cars, which have a gas engine and a rechargeable battery that gets power from the car’s brakes, are more popular locally.

More awareness of electric cars might be a reason they’re more popular in larger cities where there are more public charging stations, said Ryan Frea, a sales consultant at Witt Ford Lincoln in Sturgeon Bay.

The DCVB’s charging stations will be free for customers, but other businesses could charge for the electricity.

Moneypenny said the DCVB could facilitate bulk purchases of charging stations, which would run between $2,200 and $3,000, depending on how many are purchased at a time.

“If we’re going to talk about environmental sustainability we need to get in the game,” he said. “We can’t just say, ‘Somebody should worry about sustainability in Door County.’ We need to blend this into our messaging.”