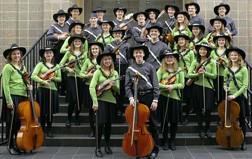 Since 1994, the Saline Fiddlers have undeniably set the standard for extracurricular music programs in the United States. The group began with a simple idea: introduce an alternative style of music education to public school students.

The Saline Fiddlers are fully equipped, amplified and present an energetic, polished stage show that includes music, song and dance from the traditions of American folk fiddle, bluegrass, jazz, western swing and Celtic music. Their repertoire includes many pieces composed or arranged by a talented artistic team, headed up by Artistic Director Ben Culver.

Over the years, the Saline Fiddlers has introduced many fine singing voices, as well as the immensely popular Fiddlers Cloggers, choreographed by Sheila Graziano.

The Saline Fiddlers represent the positive side of today’s youth while reflecting the rural traditions of Saline, Michigan and ultimately the country. The performers, all students at Saline High School, earn their places through competitive auditions based on musical ability and personal integrity. The Fiddlers’ tours have spanned the United States, as well as several trips abroad.

The Peg Egan Center is an outdoor amphitheatre, and in case of rain, the concert will be held at the Calvary Methodist Church in Egg Harbor. Carry-ins are allowed.