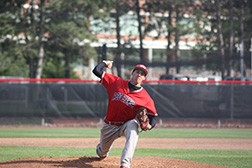 Door County was well represented at the recent NCAA Division III Midwest conference tournament held in Grinnell, Iowa, last week. The four-team tournament brings together the top two teams for the North Division to face off against the top two teams from the south, with the winner advancing to one of the eight NCAA Regional tournaments.

Representing the southern half of the conference were two teams from Iowa – Grinnell and Cornell. From the north were the Ripon Red Hawks and the St. Norbert College Green Knights. Ripon entered the tournament with the overall number one seed with their third consecutive conference record of 14-2.

Ripon won the tournament in four games after defeating Cornell College in a must-win fourth game 8 – 0, allowing seven hits and only committing one error. With the win, Ripon advances to the La Crosse Division III tournament where they will open against the number one seed and last year’s division III national champion Whitewater.

With three players on the Ripon team and one on the St. Norbert’s, Door County baseball was well represented.

Michael Anderson, a 2011 graduate of Sturgeon Bay and current senior at Ripon, saw action as a reliever in the championship game against Cornell. Anderson entered the game in the eighth inning, facing four batters and giving up a walk and no hits.

Ray Macdonald is a 2013 graduate of Washington Island and a current sophomore at St. Norbert College. Ray is the designated hitter for the St. Norbert team, with a .239 batting average, 67 at bats and two home runs.

Nick Kita is a 2014 graduate of Gibraltar and a freshman at Ripon. When not playing third base, Nick fills the role of designated hitter. Nick’s tournament highlights included 16 at bats with eight hits, including a two-run home run in the game against St. Norbert, and six RBIs. Nick also provided solid defense in the championship game against Cornell. Nick was also selected first team all-conference as a freshman. In his initial season he batted .339, and contributed seven doubles, 17 RBIs and scored 19 runs.

Matt Hecht is a 2013 graduate of Gibraltar and a sophomore at Ripon. Matt is in the starting rotation of pitchers for Ripon. Tournament highlights included starting the championship game against Cornell, where he pitched seven scoreless innings, facing 29 batters, giving up six hits, and two walks while striking out six batters.