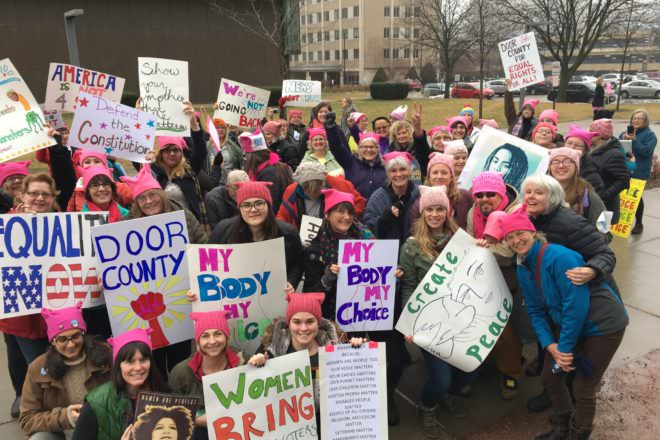 Like a meteorological metaphor for the uncertainty that lies ahead with the new administration, a dense fog rolled into Madison and obscured the Capitol on President Donald Trump’s inauguration day, remaining in place well into the next day, Jan. 21, for the Women’s March in Madison. The Capitol rotunda was completely consumed by fog for most of the morning, only to emerge as the thousands of marchers made their way up State Street.

Women of all ages and their allies took to the streets in cities around the world the day after the Trump inauguration to show solidarity for women’s rights, which, many signs pointed out in the various marches, are human rights.

In Madison – where police say close to 100,000 people showed up to march – there were also signs advocating gay rights, immigrant rights, admonitions to climate change deniers and support for teachers and public education.

Many women donned the symbolic knitted pink pussy hats. Someone had even adorned “Forward,” the replica of Jean Pond Miner’s 1893 sculpture on the Capitol steps facing State Street, with a pink hat.

Despite the seemingly endless wall of human flesh streaming up State Street from the Library Mall to the Capitol the mood was cheery, friendly and peaceful – not a sign of anti-march activists or confrontation. Families pushed strollers or carried bambinos in backpacks, so it was family friendly. The young marched shoulder to shoulder with the old, so it was multi-generational.

All animosity was aimed at one source – the 45th president of the United States.

More than 50 Door County women boarded a bus at the Target parking lot Saturday morning to attend the march. Dawn Patel was one of the organizers of the bus trip. The bus filled quickly and Patel said everyone had their own reason for taking part in the march.

“I think people are doing it for a lot of different reasons,” she said. “I think this is an incredible time for people of all different political viewpoints and beliefs who care about this country and the world to come together and speak out against not only the campaign that Donald Trump ran but also the techniques and political beliefs that he’s bringing into Washington and proving to be more than campaign rhetoric through his choice of cabinet picks. So I’m deeply troubled for this country. Because we are the largest, wealthiest country in the world, I’m deeply troubled for the world. I feel like to not speak out at a time like this is not just passive but is being irresponsible as a human being and as a patriot. It’s a women’s march and women are leading the march, but it certainly encompasses much more than that. I think this is bigger than party politics.”

“Being down in Madison with that march was such an amazing day,” said Pat Scieszinski of Sturgeon Bay, one of those who boarded the bus. “It was absolutely so powerful and energizing and positive. I went because I needed someplace to put all of the emotional upset after the election and wanted to do something positive. I really got that in spades. It was wonderful.”

More than anything, Scieszinski said she was happy to see the younger generation getting involved.

“I’m 64,” she said. “It was exciting to me to see so many young women and young people in general. It was pretty darn exciting and very uplifting to me, that the next generation is indeed coming along.”

She was also impressed by the positive energy exuded at the march.

“It was like feminism was reborn,” she said. “That sea of pink with the pussycat hats. I did not choose to wear one of those hats but I understand the sentiment and thought it was pretty cool to see so many people out there with that. I was also so impressed with the police force. I don’t think I saw a single officer who did not have a smile on their face.”

“Personally for me, it was the most energizing and invigorating thing I have done maybe in my life,” said Kathy Navis of Egg Harbor, who also went on the Door County bus. “And then to get home and see the number of people around the planet, millions and millions of people protesting around the planet. I went feeling totally disheartened and kind of hopeless and I left there feeling like this is just the beginning. It was an amazing day. I’m super-motivated now. They have really stirred up the pot and now we are about to really take action.”