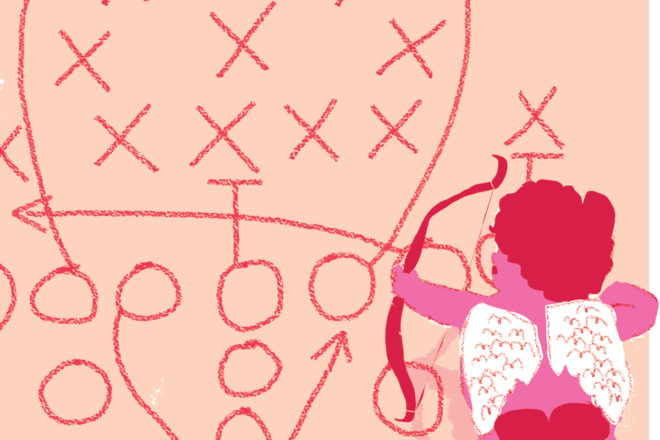 I remember staring more than a little intently at the boxes of valentines on the shelves of the local variety store. There was not a great selection. As I stared, I wondered whether I should add little pieces of candy to some of the valentines and worried about which one to get for my teacher.

These were weighty decisions for a nine-year-old. My whole future might rest on which valentine I gave the girl in my class or what gift I would give my teacher. Small-town Valentine’s Day politics played a major role in the lives of those who chose to play, sometimes for years to come.

Finally, with a few crumpled dollar bills in my hand and some change rescued from my change bank that I was supposed to save, I chose a box of valentines and a small package of wrapped chocolate hearts. My teacher would come later in my selection process.

I walked at a brisk pace up the street the four blocks to my home. When I got home, I broke the plastic seal on the valentines and poured the cards and envelopes on the floor. Then I began the process of sorting – looking, I suppose, for the serious ones that would pledge my heartfelt love for Lois, or Margaret, or Candace.

“You’re Sum Valentine” with a series of added numbers. “Let’s Strike Up a Match, Valentine” written over a matchbook, with one ready to strike – which seemed not to be a very safe message for my fifth-grade classmates. I kept looking for just the right message. One shouted, “I’ve learned to love you.” A little too bold, I thought. Using the “L word” was risky at age nine.

Then I saw it: three cats on a card and words that could be interpreted many different ways: “You’re nicer than nice; you’re sweeter than sweet; without you, Valentine’s Day would be incomplete.” It appealed to my need for subtlety while extending the affection I thought was necessary for the one girl who was going to receive this message.

Now I had to decide whether I was going to sign it or send it anonymously. Signing was another risky proposition. Finally, I decided on just my first name.

Now that I had decided on the one, I had to decide what to give to the rest of my class. Our teacher had given us a mimeographed list of names so we wouldn’t leave anyone out. I needed 22 valentines – 21 now that I had eliminated the one I thought was an expression of my love.

And I still had to choose one for my teacher. There was also the matter of the candy hearts and whether or not to put them in some of the envelopes. As I looked at the pile, I saw one that made me giggle: “I’m gonna Pop a Corny question: Will you be my valentine?” I decided I’d send that to my special girl with no signature.

Working through my list and matching cards to names, I found one that would work for my teacher: a blond boy and a brunette girl looking out, and behind them on the chalkboard, “Teacher, please be my valentine.” It would save me money because I wouldn’t have to buy a big card. I could put some chocolate hearts in the envelope, and it would be just right.

Valentine’s Day came, and there was a variety of cupcakes and cookies and the valentine exchange, all seeming a bit anticlimactic after the anxiety of choosing the right cards for the right people.

I don’t remember whether the girl I gave the cards to acknowledged me or not, but I do remember one of the girls giving me a valentine that contained the “L word,” and when I opened it and looked up, she gave me a very shy smile. I smiled back.

For many years, Michael Brecke – former pastor at St. Paul’s Lutheran Church and a founding board member of Write On, Door County – has written a column for Write On’s website to encourage people to write or share their own stories.