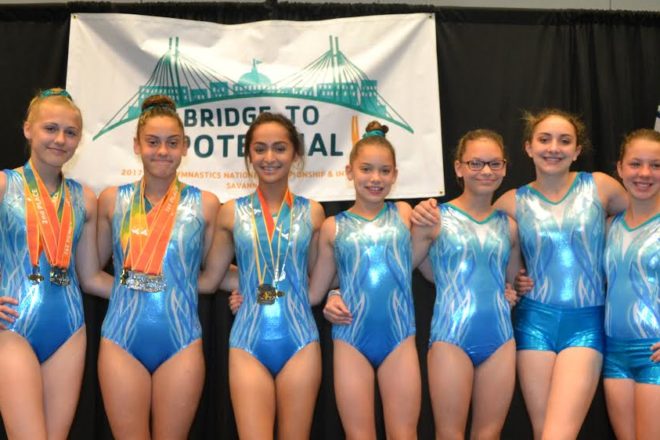 The Door County YMCA Strivers Gymnastics Team captured four national titles, 17 individual top 10 medals and a top 10 team trophy at the 2017 YMCA National Gymnastics Championships held in Savannah, Ga., June 27 to July 2. More than 4,000 gymnasts from all over the United States qualified and competed for the titles in Compulsory Levels 1-10 and in four levels of the XCel program. 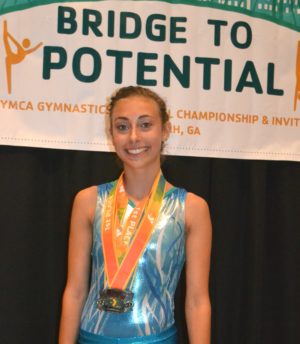 National Medals are awarded to the top eight gymnasts on each event and in each level. All 40 Striver gymnasts qualified for Nationals, ten girls chose to make the journey to Savannah. Laci Lautenbach (XCel Gold) brought home national titles in the All Around and vault. She won silver on bars and a fourth on floor. Miya Eliyha (Level 6) won a national title in the All Around; a silver on floor, vault and bars; and bronze on balance beam. MaKiala McCambridge (Level 6) won her titles on floor and bars; silver in the All Around and bronze on vault. Reetika Jandu (Level 6) won three fifth place medals in All Around, vault and bars, and placed seventh on floor. Level 3 gymnast Tiani LeMieux placed fourth on bars and eighth on floor.

The Level 6 Strivers Team was awarded a team award for placing tenth among all Level 6 teams from around the country. Level 6 team members are Miya Eliyha, MaKiala McCambridge, Reetika Jandu, Alexis Hemminger, and Maddie, Izzy and Mallory Barker.

The Striver Gymnastics Team is celebrating more than 25 years of competitive gymnastics. The team is coached by Nikki Pollman, Amy Gamble, Gerritt DeJonge, Mikki Rankin, Heather Haese, Erin Hemminger and Hillary Sheppard. Next year he team will have the opportunity to qualify and compete in Toledo, Ohio at the 2018 YMCA National Gymnastics Championships.