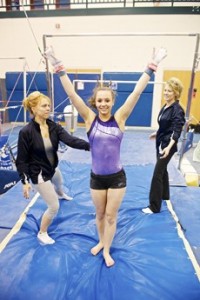 Gymnastics director Nikki Pollman and Mikki Rankin keep a watchful eye on Gymnast Jacqlyn Mosgaller as she works out on the uneven parallel bars. Photo by Len Villano.

“It’s just for fun,” explains Jacqlyn Mosgaller about why she competes with the YMCA Strivers gymnastics team. Mosgaller, a Level 7 gymnast from Sturgeon Bay High School, says it like gymnastics is equivalent to playing Frisbee in a park, but it is anything but a stress-free, low-risk sport. Gymnastics is all about patience, grit, determination and exact technical ability; it’s a sport that few succeed in, but the Door County Strivers are doing just that.

In 2012 the Strivers had an impressive showing at the YMCA National Championships. Sophia Pollman was awarded the championship for vault, and Abby Thiede placed second on balance beam. Throughout the 2013 season, the Strivers maintained last year’s momentum and won multiple team trophies and individual medals, including 8-year-old Alexa Nelson who medaled in the top three at all the Strivers competitions.

Before any repeat trips to Nationals, gymnasts have to make it through the 2013 YMCA State Championships; conveniently, they will be held March 15 – 17 in Sturgeon Bay. It’s the first meet of its size to be hosted by the Strivers with approximately 850 girls and 45 boys competing in 16 rounds of gymnastics.

With all the excitement surrounding the state championships, the most exciting aspect of the competition is simple for the gymnasts – friends and family. Mosgaller comments, “Nobody sees us compete normally so it’s exciting to have it here around hometown family and friends.”

Nikki Pollman, YMCA Gymnastics Director and Head Coach of 16 years, is hopeful for a strong showing from her gymnasts, and rightfully so. An impressive 26 out of 28 Strivers qualified for this championship by reaching mandatory All Around scores.

An outsider would be impressed with the success the Strivers achieved, but Pollman always believed the program had legs. Pollman made a proclamation when she was hired as Gymnastics Director foreshadowing this moment. “‘I guarantee you we will outgrow this gym,’” she boldly proclaimed in 1997. She responds today with, “Guess what, we’re there.”

Pollman is quick to point out she did not grow the program alone. Mikki Rankin implemented the program and the success “speaks to Mikki’s commitment, and bringing in fulltime staff and coaching.”

Rankin is still involved with coaching along with Amy Gamble, Gerrit de Jong and Deborah Christensen.

With nearly her whole team competing, Pollman, and the entire team, should feel a sense of accomplishment. Pollman says, “This is who I am and what I do. I thought we could really build this program – the kids are great, and we can put Door County on the map.”

For more information about the Championships or the YMCA gymnastics program, call 920.743.4949 or visit http://www.doorcountyymca.org.