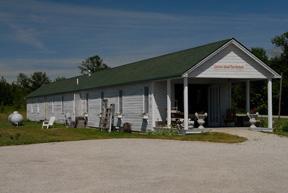 Wildwood Orchard Farm Market was once the living quarters for WWII POW’s sent to Door County to pick cherries.

If you’ve traveled the stretch of Highway 42 out of Sister Bay toward Ellison Bay, you’ve no doubt seen it – the somewhat curious, long but narrow building at the intersection of the highway and Wildwood Road. When I sheepishly ask the building’s owner, Mark Carlson, how the structure was previously used, he says he doesn’t blame me for not knowing. I quickly learn that the structure is a refurbished migrant picker’s shack – built in the 1940s. Fittingly, it now houses the Wildwood Market.

“There really aren’t many of these around anymore,” Carlson says as we go inside to meet his wife Mary Pat. “We actually moved the shack – it used to be on Old Stage Road and was destined for the wrecking ball. When we began the market, it made perfect sense to use this building. It reminds us that without those workers, Door County could have never produced those crops. That was back when the county was the largest cherry-producing area in the United States.”

As I talk to the Carlsons two common ideals permeate nearly every aspect of our conversation – the remembrance of Door County’s agricultural past and the nurturing of its future. The Carlson’s Island View Orchard and Wildwood Market may look similar to the traditional small mom and pop orchards and farm markets that dot the peninsula, but it’s also a model for an alternative, modern way of agricultural production, processing, and marketing.

Mark’s roots run deep in this patch of Sister Bay. The orchard’s property has been in his family since 1846 – before Wisconsin was a state. His grandfather Herman named the orchard Island View because at the time all of the peninsula’s islands were visible from part of the property.

The orchard and land quickly became the Carlson family’s anchor, with Mark’s father immersing himself in the operations of the farm at a young age. Mark remembers hearing stories about happenings on the farm, including great stories about the German POWs who picked cherries at Island View during World War II.

“During 1943 and 1944, it was impossible to get any pickers. Gas rationing and tire rationing was in full effect, and a lot of people worked down in Sturgeon Bay helping make products to support the war effort,” Mark says. “So we had the German prisoners staying on the farm and picking. As you can imagine, it was hard for them to leave when the time came.” 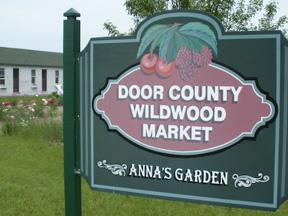 Life had other plans for Mark besides the farm – at 18 he was the first man from Door County initiated into the Vietnam War draft, and he went on to become a nuclear missiles instructor for the United States Air Force. After he left the Air Force, he taught in the University of Wisconsin system at UW-Stout, where he met Mary Pat, who was also a teacher.

The couple lived in Menomonie for 12 years before Mark found himself missing Door County. They bought the orchard from his dad with plans to slowly learn to manage the land from him, thinking it would make for a fun retirement. Then, real life intervened.

“Mark’s dad passed away during our first harvest, which was very difficult for all of us,” Mary Pat recalls.

They finished harvesting but then found out the processing plan had filled their quota and would take no more. After that shock, they decided they would try to market and produce their own items, an endeavor that proved to have its share of difficulties.

“I didn’t realize that there wasn’t a kitchen that rented by the hour for this sort of thing,” Mary Pat says. Unfazed, she set out to create exactly that – a kitchen space that could be rented on an hourly basis. Farm Market Kitchen was soon developed as a 501(c)(3) organization as a shared-use food processing incubator and food heritage center in Algoma.

The kitchen serves the counties of Door, Brown, Kewaunee Manitowoc and beyond, and has filled a niche for a lot of people, with 50 current users and 10 more on a waiting list.

The kitchen holds benefits for growers and producers, but it helps the community is well. A year-round farm market is available for anyone who wants to sell the products they have developed in the kitchen, and technical support for marketing and distributing products is also available. 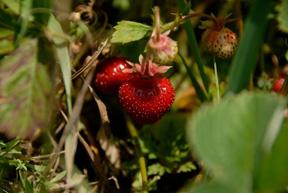 “Farmers need help with marketing, just like any other business,” Mary Pat says.

Another advantage of the Farm Market Kitchen is that most of the people using it use Wisconsin-grown or produced products.

“The kitchen has turned into a bit of a tool for marketing Wisconsin growers and producers,” she says. “Obviously we don’t dictate what the people using the kitchen need to do, but the people do usually wind up using Wisconsin products. It kind of creates a full circle of ‘helping’ – farmers are supporting other farmers, the community is supporting the farmers, and the farmers support the community…there’s not a lot of us small growers out there anymore, so helping each other is the most important part of our business.”

The Carlson’s spoke about the absence of Door County’s sweet cherry crop, and I marveled at how calm and matter-of-fact the two were about the loss of their own crop. This is where I learned there is another important part of the Carlson’s business – keeping things in perspective.

“The blossom season came, and their weren’t any blossoms,” Mark says. “It’s difficult…but something like this also forces you to think of other things you can offer your customers. We’re concentrating on our dried and frozen cherries, and also on new endeavors. We planted over 40 varieties of tomatoes this year, and are looking forward to offering ‘pick-your-own’ tomatoes. This isn’t the first time that there hasn’t been a cherry crop, and it certainly won’t be the last.”

At one time there were 2,000 cherry growers between Door and Kewaunee counties. When the Carlson’s purchased Island View Orchard in 1990, that number had dwindled to around 200. Today, about 40 growers dot the peninsula, most of them small “mom and pop” growers like Island View.

“It’s a very different world out there for farmers,” Mark says. “When my grandfather and father were alive, the farm was your only job. It was possible to own a farm and raise your family on that farm. Now, statistics show that most farm families have an average of two off-site jobs. Also, children of farmers don’t always want to take the farm over when they get older, and it’s sometimes difficult to find another person that wants to own a farm.”

These statistics don’t apply to Mark, Mary Pat, and their daughter Anna, who are all immersed in the operations of the orchard and Wildwood Market. Anna is a bit of a young agricultural entrepreneur, producing and packaging fudge, caramel corn and dried flowers.

They found out they were expecting Anna the day after they bought the orchard, and she grew up sleeping under the trees as her parents picked cherries. At five, she said she wouldn’t pick another cherry.

“She wanted to contribute something else,” Mary Pat says. “So we planted peonies and other flowers outside the market and named it ‘Anna’s Garden.’ She now dries them and sells them commercially.”

If you ask Mark and Mary Pat Carlson what they get out of farming, they are quick to say it is good for their soul.

“I was working on the restoration of this shack when the planes hit the Twin Towers on 9/11,” Mark says. “I knew there was a reason why I was saving this building, and that reaffirmed it for me. Before we even bought the farm, we would just come up and stand in the middle of the orchard, smelling those wonderful blossoms. I just have a good feeling about this, and that’s why we’ve been here for eighteen years. It’s almost spiritual.”