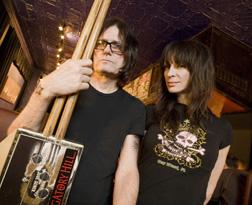 Since Purgatory Hill’s last Door County performance, they have travelled thousands of miles, recorded a new album, and were featured in the Los Angeles Times. They now are coming home to perform at Sturgeon Bay’s Cherry Lanes on Saturday, April 23 at 10 pm.

Purgatory Hill – comprised of Door County’s own pat mAcdonald and Milwaukee transplant melaniejane – has been hard at work since August of 2007 when mAcdonald first saw melaniejane perform on her electric cello and invited her to “sit in on a few.” The rest is history in the making and the duo has performed non-stop ever since, continuing to thrive on a state of constant evolution and accumulated mileage on a white Chevy Astro.

Nowadays, though their current sound is heavy with mAcdonald’s low-down, dirty, amped-out cigarbox guitar and melaniejane’s organ and percussion, they have not abandoned their original configuration featuring guitar and electric cello.

melaniejane will open the show with solo cello/looping at 10 pm.