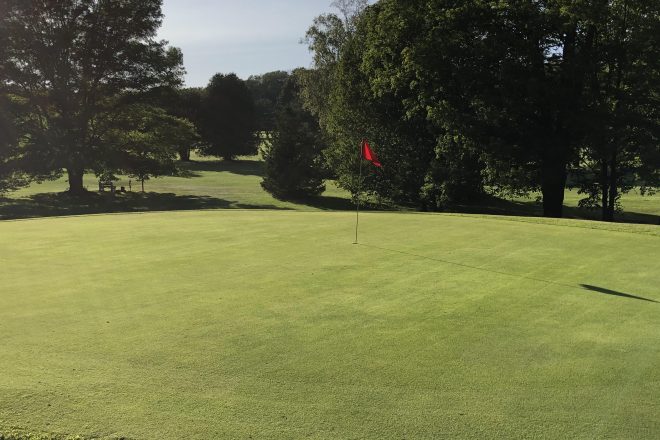 Sun casts shadows over the sixth green, mature trees and the seventh fairway at The Alpine. These two scenic holes along the woods can make or break a golfer’s nine-hole score. Photo by Craig Sterrett.

Golf courses often have signature holes, famous for scenery and difficulty. But at each of Door County’s 18-hole courses, back-to-back pairs of unsung golf holes also can make or break a player’s round.

For example, the 12th hole with the bell on the fairway and the clifftop tee shot on the sixth might be the most memorable spots at Peninsula State Park Golf Course.

However, golfers might find the third and fourth holes at Peninsula tougher to par. From the men’s tees, it takes a perfect, 210-yard shot to reach the spot where the third fairway becomes narrow between stands of tall trees. From the championship tee, it takes a 240-yard fade (or an educated slice) to place the ball between the trees and near the 150-yard marker.

The safest play is a lay-up shot and then an extremely long approach, but who wants to play it safe at the park? Similar to #3, a bogey’s a satisfactory score on the long, par-3 fourth hole, which has a shallow green from front to back and forest behind the green.

Idlewild’s fifth hole, a long par-4 with a marsh to the right and a creek in front of the green, might be more notorious, but the 11th and 12th holes pack a mighty one-two punch. A target-golf mindset can help players run this gauntlet.

The 400-plus-yard 12th demands another perfectly placed tee shot up a narrow fairway and short of a creek that cuts diagonally through the fairway. Hooked drives find the water hazard, and slices vanish into the trees.

The most unusual hole at Cherry Hills has to be the 409-yard 15th, requiring an accurate tee shot through the woods and then a swing and a prayer off a cliff. But back-to-back holes on the front nine are better risk-reward holes – there’s only one way to play the 15th.

With its tee on top of a hill and the green reachable for big hitters, the par-four fifth hole can turn an aggressive tee shot into a miraculous eagle or a scorecard disaster. The smart shot’s an iron or fairway wood down the hill and short of the right-angle dogleg. After that, the spectacular, narrow, uphill, par-5 sixth hole – with a pond cutting into the fairway about 140 yards from the green – forces players to stay focused in the middle of the front nine.

The Orchards’ two toughest holes might be #16 and #17, the par-5 next to a lake and the par-3 surrounded by the lake. But those come after two other holes on the back nine that can play just as tough. During construction, contractors had to dynamite part of the fairway at the par-4 12th hole to minimize blind shots into the green. A long, straight drive will give players a good look at the flag. Short drives, not so much.

And then there’s #13. Photogenic from Highway 42, with its green bordered by a pond, the 13th at The Orchards can prove unlucky if players lose their second shots long and to the right.

A pair of scenic holes on the century-old Red Nine at the Alpine look easy, but they can make the difference between a good or bad 18-hole score. The par-3 sixth hole, along a wooded portion of the Niagara Escarpment, requires a perfect tee shot of 140 to 150 yards, but anything landing left or short of the elevated green rolls down a hill.

The dogleg-right, par-4 seventh hole tempts course visitors to hit a high shot over the woods to the green, but that often leads to triple-bogeys. A well-placed drive to the 100-yard marker might be 120 or 245 yards, depending on which tees the golfer chooses.

Finally, at Maxwelton Braes, golfers had better get their pars and birdies on three relatively easy holes at the beginning of the front nine. That’s because a bogey’s a good score for almost anyone on the 450-yard, uphill, par-4 fourth hole. Then, wind direction and bunkers surrounding the green can make the par-3 fifth hole play extremely long or tricky.