The planning has started for Door County’s most eclectic parade, the one that draws people dressed in Viking costumes, families in matching reunion shirts and a camel to walk back and forth through Jacksonport every Thanksgiving.

“Anybody and everybody can be in it,” said Mary Witteborg, marketing teacher at Gibraltar Area Schools.

Witteborg leads the students in Gibraltar DECA, a club that teaches students about business, marketing and project management. The club is working with Sevastopol students and a group of adults to organize the parade.

“The parade started 17 years ago as a diversion from just sitting around and eating and drinking all day,” Witteborg said. “They started putting this little parade together, and instead of throwing candy they threw birdseed. Then the next year it grew a little bit and they said ‘you know, we should do something. Let’s raise money and buy Christmas gifts for a needy family’ and it kept growing and growing, and now we’re in the 17th year, so every year they choose a cause.”

This year the money raised through raffles and donations during the parade will benefit Cruz Anschutz, a five-year-old boy with Retinoblastoma, a cancerous tumor in his left eye.

Private donations to the Anschutz family can be made at Baylake Banks. Write checks to Gibraltar DECA, in Cruz’s name. 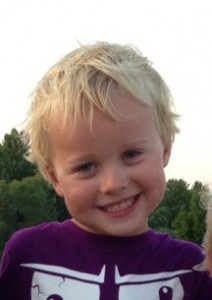 Even after chemotherapy, cancer will be part of family’s life

In August, the Anschutz family got good news from the doctor. Cruz, their five-year-old son, was responding well to treatment and could take a four-month break before returning to the hospital in December.

Since last Thanksgiving, Robin Anschutz and Cruz have been flying to the Children’s Hospital of Philadelphia for rounds of chemotherapy to treat Cruz’s retinoblastoma, a cancerous tumor in his left eye.

It all started last Thanksgiving when Robin and her husband Culley noticed a silver glare in Cruz’s eye. What they first thought was a strange reflection of light soon led to doctor appointments in Green Bay, Ohio and Pennsylvania, to a diagnosis of cancer and to monthly chemotherapy.

“We’re OK, but it was bad at the beginning, it was rough,” Robin said. “I’ve never seen my husband cry, maybe one other time until that. It was awful. It was the word [cancer]. It was them sitting us at the Mayo Clinic in the conference room, telling us.”

Cruz’s cancer treatments last all day. He gets two types of chemotherapy, one through an artery in his leg and one directly into his eye, and he has to lay flat for six hours after it’s done. That’s when he and Robin watch movies and visit with the other patients and families in the crowded recovery room.

“He doesn’t look sick and I think that was part of what helped us,” she said. “He’s OK, he’s good, he’s great. You would look at him and you would never know”

Cruz is in kindergarten at Southern Door County School District, and aside from the sunglasses he has to wear in bright light, he looks like any other student.

“With his chemo it doesn’t affect his whole body,” Robin said. “One goes through his artery right to his eye, and the other one straight to his eye. All he lost was his eyelashes. We’re so very fortunate.”

At home, the Anschutzes don’t say the word “cancer.” To explain the travel and treatments to Cruz and their younger daughter Amira the couple says their son has a sick eye.

“Why have him worried about it?” Robin said.

Robin doesn’t know how long she’ll be taking Cruz to Philadelphia for chemotherapy. The last news she heard was good – he got a four-month break – but the future is uncertain. Even after the treatment is done, he’ll still have to go for checkups, and she’ll always be afraid the disease will return in another form.

No matter what happens with his health, Robin said cancer will be a part of Cruz’s life. He’s benefited from organizations such as Door CANcer and the Jacksonport Thanksgiving Day Parade, and someday he’ll learn to give back.