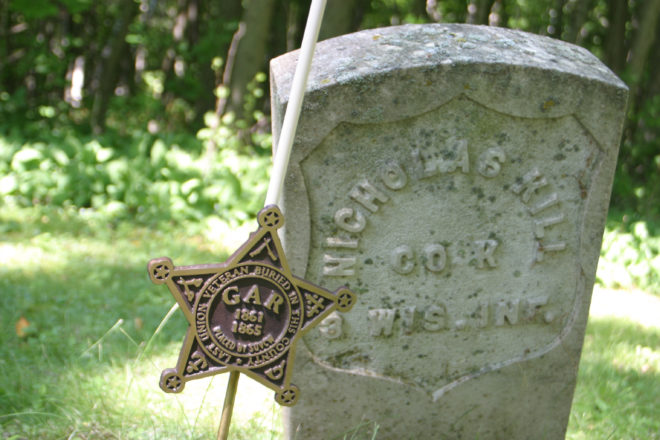 “Comrades! Attend to this at once, or we shall not know whether you are dead, proud or gone to Texas.”

That was the rallying cry for a meeting to be held in June 1880 for a meeting in Milwaukee of Wisconsin members of the Grand Army of the Republic (GAR), a fraternal organization formed shortly after the end of the Civil War, for men who served the Union cause. That rallying cry was so successful that 40,000 blue-clad veterans from all over the country descended on Milwaukee for what is regarded as the rebirth of what was then a flagging organization.

The year 1889 was a high point for the GAR in Wisconsin, with 264 active posts with nearly 14,000 members wielding a collective political will. Eight post-Civil War governors were card-carrying GAR members. The organization was dissolved in 1956 when its last verified member, Albert Woolson of Duluth, Minn., died at the age of 106.

However, another fraternal organization took its place – Sons of Union Veterans of the Civil War (SUVCW) – and the Col. Hans Heg Camp 15 of Wind Lake, Wis., has taken up a new mission. Its members plan to plant markers honoring the last Union Civil War veteran to die in each of the state’s 72 counties.

This week, Nicholas Kill, Door County’s last Civil War veteran, received his plaque from SUVCW member Rich Kassan, who decided to install the plaque while on vacation here. He said the organization may hold a formal ceremony in full Civil War gear in the future.

“We’ll come up with some of the boys and bark off a few rounds with our muskets,” Kassan said. “We have a script we follow and we’re all in our Union outfits.”

Kill’s death at age 91 in July 1936 was front-page news in the county because of his well-known status as the sole remaining Civil War veteran in the county.

Kassan said to date 15 Civil War veterans in 15 different counties have been recognized.

Kill, who was the second resident of Juddville, is buried in the Juddville Cemetery.