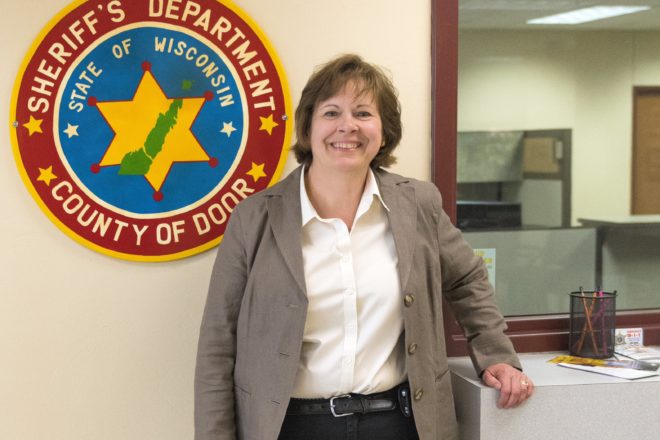 The Door County Sheriff’s Department was a man’s world in 1983 when 21-year-old Connie Eucker became the first female patrol officer in the department.

“It certainly has been quite the journey,” said Connie (Eucker) Schuster just weeks before her May 15, 2017 retirement from the force. “It’s hard to believe 34 years have gone by.”

Shuster grew up in the Forestville/Maplewood area and is a 1980 graduate of Southern Door High School.

“For me law enforcement was the perfect combination of several things,” she said. “I liked law. I liked psychology. I liked social work and helping people. I like being engaged. It combined everything I was looking for. Something different every day. If you’re bored, it’s your own fault, that’s what I say.”

“Back in the early ’80s, getting a job was very, very difficult for anyone in the profession,” she said. “So it took me a little while. I did a couple of other things before I got a job here, and I was fortunate enough to get a job here where I grew up. I had just turned 21 when I was hired here. I was the first female full-time deputy. I did a lot of riding along with other officers, just getting me acquainted with what was going on in the department. I knew no one.”

It was during the ride-alongs that Schuster realized that all the classroom training in the world will not prepare you for duty on the streets.

“I had the training, but this is the practical part,” she said. “You can sit in a classroom all day long, but there are aspects you can’t learn in a classroom. It was an eye-opening experience, when you realize what the job is all about.”

In addition to getting a better understanding of what police officers do, Schuster felt she had to make herself fit into the male-oriented department.

“I think it was very different for the people that worked here,” she said. “I can’t comment on what they thought. The majority of the people, whether they accepted me or not, I don’t know. They didn’t say anything. I did have one person, their intentions were to be honest with me, but it probably wasn’t the best thing to say to a new employee. He basically said, ‘I don’t think women should be in law enforcement. I didn’t agree that they hired you, and I just wanted you to know that.’ Well, that’s difficult, especially when that person is in a supervisory role. His intentions were to be honest, but it kind of made me feel like I could never measure up. It’s so much different now. It’s so much better.”

She admits that any new hire of either sex is going to have to prove that they fit in the job.

“Some people are made for the job. Some people grow into the job,” Schuster said. “I like to think I grew into the job. I was very shy. You can’t be that way and be successful, so I grew and evolved. I don’t know what everyone else thought around me. My idea now is, I have a role here. There are sometimes people who only want to talk to me, not necessarily because I’m a woman but because how I treated them five years ago or what have you. In the long run, I think I’ve done a pretty good job and I’m happy I was able to serve the citizens and make it a little bit better and safer, or tried to.”

Today most new deputies start out in the jail before being assigned to the streets.

“In retrospect, I like how it’s done now,” Schuster said. “Deputies can work 6, 7, 8 years in the jail before they have an opportunity to work on the patrol side of it. I didn’t have the background in the jail. I was kind of thrust into it quicker than many other people. If I had had a little more experience, that would have helped, but I didn’t, so you make do with what you’ve got.”

Her path on the force cemented when she found a willing mentor.

“I found people after a while who were accepting and who enjoyed explaining what they were doing,” she said. “One particular person who worked here many years ago, Allyn Buehler, at the time I was hired he was the investigative sergeant. I was always interested in what he was doing. Whenever he was at a scene, I was right alongside him. He would show me things and explain why he was doing certain things. He even made the comment to me one time, ‘I’m showing you this because I know you want to learn.’ He would be hard on me too if I did something wrong, but if you did something right, he was right there, writing up commendations or telling you job well done. He was a good leader, for me.”

“Connie was my buddy,” Al Buehler said in a telephone call from Canton, Georgia, where he retired to be near his daughter and grandchildren. Buehler joined the department in 1972 and eventually became the department’s first investigator. He left after 27 years, in February 1999, and finished his career in Washington County before retiring.

“She came into the job when she was young, at a time when women in law enforcement, well, people weren’t throwing their arms open and saying, ‘Please come in.’ There was still a lot of resistance. There were some people fairly high-placed in local government that were against it and pretty vocal about not wanting women in law enforcement. She had that mountain to climb first.”

Buehler said he was always impressed by Schuster’s smartness and desire to get the job done right.

“Connie’s always been smart,” he said. “She figured out how to walk that thin line between questioning without questioning and gathering information without stepping on toes. She developed that knack. There was never any waltzing around or big to-do about stuff. That’s why she was so easy to work with. She always got the job done, got it done right and got it done timely. That is the essence of police work. I feel honored that anyone, and especially Connie, thought enough of what I shared with her, that it would set her career path for her.”

“Connie was a real asset to our department,” said Chuck Brann, who was the Door County Sheriff when Schuster was hired. “Connie came in and showed real professionalism right from the start and was a hard worker.”

Brann said a woman in law enforcement was nothing new to him, since his own sister, Mary Alyce Brann, was the first female on the Sturgeon Bay Police Department when she was hired in 1980 and in 1983 became the first K-9 handler on the department, one of only two female dog handlers in the state at the time.

“I was out of town when Connie retired,” Brann said. “I just wish her the best. She deserves to enjoy the future.”

At the beginning of her career, Schuster said she didn’t have any particular aspirations.

“But now when I look at it, I should have realized investigative sergeant was what I wanted,” she said. “When I was a patrol officer, I would never be the one writing the most speeding tickets in a month. Some people find traffic very easy to do, very relaxing. I was a little bored with it, and I was never going to be the best deputy with that type of thing. Now, give me someone to find, a case to follow up, a witness to find, a victim to re-interview, that type of thing. I didn’t care if it was my case or not. That’s what I enjoy doing. When I was promoted first to investigator (in 2000), someone came up to me and said, ‘That’s what you wanted to do all along.’ It is my niche.”

In 2004 she was promoted to head the investigative division of the department.

“As an investigator, I know what I need to do. I’ve gotten a lot of training and I have a lot of experience,” she said, adding that part of the job is being able to gather and dispense information with sensitivity.

“You’re going to have to talk to the person who’s loved one just passed away, for whatever reason, might be an accident, a suicide,” she said. “Those are never easy, but if you do things the right way, you can make it easier for that other person, and then you go home and hold your loved one and you’re thankful it’s not them. Just because I don’t fall apart when I go to something horrific, it doesn’t mean I don’t reflect on it or shed a tear when I’m home by myself, but if I shed a tear when I’m there, they don’t have anyone to lean on. We’re human beings, too. Sometimes I might say the wrong thing, but I try very hard. It’s sometimes difficult to talk to people who are very distraught. Sometimes no one can talk to them the right way, but we try.”

Asked what she would say to a young person considering a career in law enforcement, Schuster said she would say make certain you know what you are getting into.

“There have been people throughout the years who will say something to me to the effect of, I don’t like working weekends and holidays,” Schuster said. “Well, it comes with the territory. If you really don’t like that, maybe you should seek a different job. There are so many opportunities today to find out what a law enforcement job is like, like our reserve program. We even let people ride along with deputies. That’s the best way you can see what the job is all about.”

Asked what she will miss most about the job, Schuster did not hesitate.

“The people that I work with. I work with some very intelligent, committed people who have given their entire lives to law enforcement. I have no qualms that the Door County Sheriff’s Department will go on with out me. The support staff, the jailers, the telecommunicators, everyone works together to get the job done.”

And what’s next for her?

“It’s time for a break,” she said. “One thing in law enforcement, you end up working lots of overtime. In investigations, you can’t really say yes or no to when you get called out to work a serious crime. It’s part of the job. I knew that going into it. I’m ready for not getting a phone call at three in the morning. That kind of thing. I’m looking forward to doing some things around the house that I’ve put off for 34 years. I think about a lot of different things. I’d like to do something different than what I’m doing now. The beauty of working a part-time job, if I don’t like it I can go work another part-time job. I’d like to do a little volunteering. I love animals. I have two dogs, so I’m hoping that maybe the humane society would have a little something for me to do.

“It’s exciting and scary at the same time,” she added. “I think everyone feels that at retirement. What’s next? Am I going to feel fulfilled? But there are so many things out there. Something as simple as sitting down with a cup of coffee and a good book. There’s sometimes never enough time to do that. Now, I’ll have time to do all the things I wanted to do.”