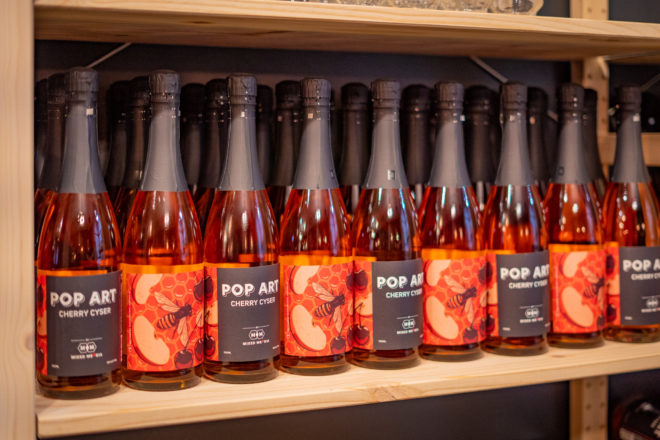 Pop Art, Mixed Meadia’s first drink, is made from honey, cherries and apples. The company’s name, Allan Hyland said, comes from the owners wanting to highlight how well honey serves as a base for other flavors. Photo by Rachel Lukas.

Ever wanted to drink like the Vikings did? In Egg Harbor, you kind of can. Mixed Meadia, a new branch of Hatch Distillery, is offering its first mead.

Allan Hyland, the face behind Mixed Meadia, has been a winemaker for 11 years, honing his craft around the Midwest before landing at Mixed Meadia. What he’s found, he said, is that regions that aren’t historically tied to wine – the way Napa and Bordeaux are, for example – have more room to experiment.

That type of breathing room, plus a facility that already uses honey in its beverage production, made Hatch Distillery the perfect setting to bring Door County’s first meadery to fruition.

Fun fact: The process to make mead, Hyland said, begins with four 650-pound barrels of honey. It’s mostly wildflower honey – honey that bees have pollinated from multiple sources – and it’s honey from both the meadery’s own apiary and other Wisconsin apiaries. The mead makers pour those barrels into a large, metal tub with water and then let the honey ferment.

“We’re doing exactly what the bees don’t want us to, essentially, ” Hyland said.
When bees make honey, they extract all the water from it so it doesn’t ferment and turn into alcohol. Here, the distillery reverses that process.

As for the flavor of the finished product, Hyland likened mead to wine, in that it comes in sweet and dry varieties. This mead is made from Door County fruits – cherries and apples currently. The peninsula’s iconic cherries, Hyland said, are actually perfect for mead because they offset the sweet honey.

Although mead is still a niche product, its popularity is growing, and those who have already discovered the ancient libation are some of the most devoted fans you’ll find.

“People are tweeting about it,” Hyland said. “If you think about 15 years ago, no one really knew about ciders. Or hard seltzers. Those kinda came out of nowhere.”

Mead is similar. Although Hatch Distillery has used honey and mead bases for its other beverages since it opened in 2018, it started making actual mead only two months ago, Hyland said.

Two months is about the minimum time to make meads, and as a result, it has only one product out right now. The longer-aged meads that are in the works can take up to two years to be ready for consumption.

Fortunately, those meads can be aged in the barrels that Hatch uses for its bourbon. By law, Hyland said, those barrels cannot be used to make bourbon more than once, making mead production a great way to repurpose some of the equipment.

Their first mead is called Pop Art, a cherry cyser, which is a mead made with apples. On June 30, they released two traditional sparkling meads: one dry, or “brut,” and one sweet, or “sec.” Where Mixed Meadia goes from there has yet to be explored and may include producing more than mead.

“Maybe we’ll start doing wax candles,” Hyland said jokingly. “We’re just trying to use all we can from the bees.”
Want to know more about Mixed Meadia’s product releases? Check its Instagram, @mixed.meadia.