In the 1930s land developer Orrin Glidden had purchased a great deal of property both along the Door Peninsula as well as in Traverse City, Michigan. According to Bill Brown, general manger for the Glidden Lodge and Beach Resort since 1997, “The Hitching Post was originally going to be a club house for a golf course that was never built.” 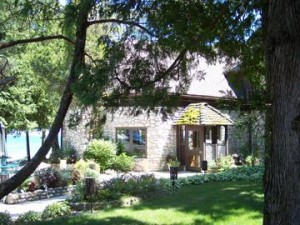 Legend has it that Ewald Schmock constructed for Glidden the road that eventually took his name, but like a number of speculators at that time, Glidden ran into financial difficulties and couldn’t pay Schmock. To settle his obligation, Glidden reportedly gave Schmock land as payment.

“This might not be true,” Brown laughed, “but I’ve heard the story from more than one person.”

Whatever the circumstances, in 1937 Ewald Schmock built the Glidden Inn that is now Donny’s Glidden Lodge Restaurant. The building remains today much as it looked then, a stone and cedar structure with an Old World feeling that reflects Schmock’s German heritage. The Wednesday night German entrees are in keeping with the tradition of the inn.

But the lodge portion of the business has changed. Schmock’s inn consisted of seven rooms on the second floor of the restaurant. Reportedly, Mama Schmock would not allow alcohol in her dining room, so as a compromise, Papa Schmock put the bar in a separate building, which no longer stands today. Now the bar has moved back into the restaurant.

At first the seven rooms were augmented by cottages, Brown explained, and then by banks of housekeeping units, and finally a two-story motel. The latter was moved to Valmy and remodeled where it remains today. 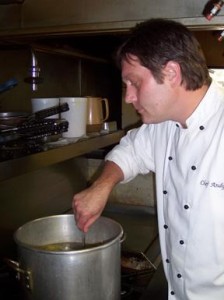 During these changes the original Glidden Lodge structure was sold first to Jim Talmadge in the ‘80s, and then to Donny and Rita Zeller in 1998. While the Zellers continue to own the building, they have sold the restaurant business to their son Tim and his associate Andy Mueller. Mueller serves as the executive chef while Tim Zeller manages the bar.

“We share the responsibilities,” Mueller said. “Tim runs the front of the house, I run the kitchen and Donny is our advisor. It’s important that the restaurant is carried on in the tradition he and Rita have set up.”

The present Glidden Lodge and Beach Resort, which is now independent of Donny’s Glidden Lodge Restaurant, was built in two stages – the north wing in 1993, and the lobby, pool and south wing in 1994. The building was designed by architect Henry Isaksen. “He did an excellent job,” Brown said, “making the resort compatible with the surroundings and with the look of the original lodge and restaurant, the exterior of stone and cedar.”

The building houses 31 condominium units, consisting of one-, two- and three-bedroom suites that are rented by their owners through condo association management. Each unit offers a lake view.

As does the restaurant.

Executive chef Andy Mueller credits the restaurant’s success with the view of the lake from the dining room, which he characterizes as “second to none,” and with “the entire dining experience, all aspects of what we have to offer.”

Over the years couples have chosen to be married in the restaurant’s dining room, Mueller said, and then come back to celebrate their anniversaries over dinner.

“Customers take pride in the fact they can bring guests and they will be happy,” said Mueller, who characterized the restaurant experience as upscale casual dining. With “an open invitation to everyone,” patrons come for birthdays, anniversaries and special events, but they also arrive directly from golfing, shopping, and other activities, he said.

“We are known for our hand-cut steaks,” Mueller said. “We get primal cuts, and then cut the steaks ourselves. Donny has been a butcher for many years; we know what we’re serving. As a result, we can provide the highest quality steaks on the market at a very reasonable price.”

The menu offers a range of “hand cut” steaks and seafood, as well as chicken breast, lamb chop and pork chop entrees, along with a Friday fish fry and Saturday prime rib feature.

“Everything is from scratch in the restaurant,” Mueller said. “Bread, soup, sauces – we don’t purchase anything ready to serve.”

The restaurant is open year around, and “people appreciate the feeling of history, character, not only the building, but also the experience,” Mueller said. “It’s a true piece of Door County.”

As is the resort.

“In the old days,” Brown said, “Glidden Lodge offered the ‘American plan’ to guests. The dinner bell would ring and everyone had assigned tables.” While that all-inclusive package has become a part of the past in Door County, the lodge still offers the opportunity to relax on the “quiet side” of the peninsula.

Not long ago Brown was passing by the balcony of one of the units and heard a guest as she looked out over the beach and lake: “It’s like I died and went to heaven!” she said.

The lodge offers various packages that include entertainment options, but also amenities that allow guests to remain on the grounds: a heated pool, tennis courts, beach volleyball, basketball, outdoor grills and exercise room. Those who like to leave their cars parked may walk the beach north to the Whitefish Dunes State Park and take trails to Cave Point Park. And, of course, they can walk across the parking lot to Donny’s Restaurant.

Similar to the restaurant, the resort finds that that a significant portion of their clientele consists of established customers. “About one-half of our business is return guests,” Brown said, “people who as they leave the lodge book for next summer, sometimes two years in advance. And occasionally, we’re into the third generation of visitors.”

A few of the visitors have been famous, the late entertainer Bob Hope, for example. “We used to get Christmas cards from him,” Brown said. “Charlton Heston used to come fishing here, too.”