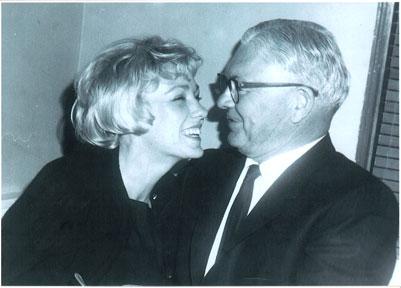 Betty White gets more fame, but the original Golden Girl calls Door County home. Mary Jane van Duyse Sorgel of Sturgeon Bay was the Green Bay Packer’s Golden Girl, a stint that is just one part of a remarkable life.

It was during halftime of a Green Bay Packers game versus the Chicago Bears at Wrigley Field in 1959 that a Chicago Tribune reporter noted that the Packers’ head majorette, a blond, golden costumed twirler, had managed to win over the tough Bears crowd. The writer dubbed her “Green Bay’s Golden Girl,” a tag that was picked up in the Green Bay papers and stuck. Fifty years later, Mary Jane van Duyse Sorgel still proudly wears the moniker. 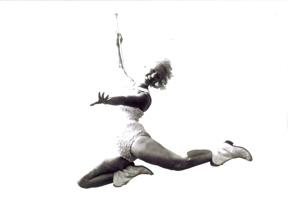 Still vivacious and fit, Mary Jane welcomes me into her home with a smile and a wink as a duo of Yorkies dance and yap at her feet. She and her home are warm and welcoming as I enter through a museum-like entry which houses press clippings and photos from her remarkable career.

Standing with her in the shrine of her achievements, taking in the entirety of her life’s work, I can still see a glimmer of the young girl who would go on to live a life that was too big for even her to dream.

Born to Belgian parents in Sturgeon Bay, Mary Jane, started dance lessons at age four, but was so bashful that she performed her first recital with her back to the audience. “That went over bigger than if I had performed it straight,” she tells me, smiling at the memory. It was an inauspicious debut, giving little indication that she would go on to become a seasoned entertainer who would perform for thousands on the field, on film, and in television.

While in high school, Mary Jane’s family owned Van’s Tavern, now the Institute Saloon. She was often at the family business dancing and twirling her baton to amuse herself and the guests. One afternoon, Wilner Burke, the manager and director of the Green Bay Packers’ Lumberjack Band, happened to stop in and took note of her talent and charm and recruited her as a Green Bay Packer majorette to twirl and lead the Packer band. He asked her parents if she could come to Green Bay to try out as a majorette.

Her career with the Packers had begun, but she was also making good on the only thing she says she ever wanted to be.

Mary Jane with beau Curly Lambeau in the 1960s.

“In the seventh grade I started out teaching and giving lessons to anybody who wanted them because I just loved teaching so much,” she tells me. She worked hard and saved money, and before she graduated high school in 1951, she had her first dance studio in Sturgeon Bay. Her studios were her heart’s passion and she would continue to teach throughout her life.

Michele Budich-Ozkan, now of Sarasota, FL, met Mary Jane as a student of hers at Don Sartell’s Camp of the Dells 43 years ago. Michele would later become a Packers Golden Girl herself and would take over teaching at the dance studios after Mary Jane married.

“Mary Jane changed my life’s direction several times and became a mentor and cherished friend to me,” Budich-Ozkan said. “It was an instant bond, and even now, if there is a question about the direction of my life, I come to Mary Jane. Her true beauty was always in her integrity and devotion to her students, still to this day.”

The year she earned the Golden Girl tag was also the first year for a new Packers coach, the soon-to-be legendary Vince Lombardi. Lombardi liked what he saw in his Golden Girl and asked her to put together a team of girls to cheer at the games. Lombardi’s wife, Marie, designed the modest uniforms in green, gold and white. Mary Jane recruited girls from her dance studios and choreographed the routines for the new squad that became known as the Golden Girls. The girls were a fixture on the sidelines in all weather conditions, and she would lead them until she retired after the 1972 season. 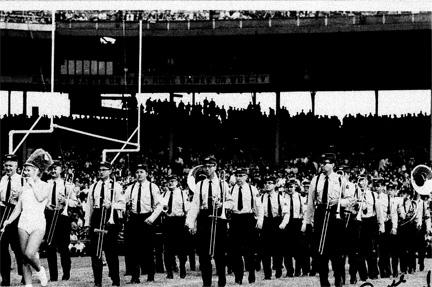 “Those girls worked hard and they were tough,” she says with pride. And Mary Jane led by example. In her 22-year career with the Packers, she never missed a rehearsal or a game.

In her 20s, her career limited time for dating, but there was one man who stood out by the name of Curly Lambeau. They were introduced at the Nautical Inn in Sturgeon Bay in 1960 by Mary Jane’s brother, journalist Fritz Van. Lambeau had property in Fish Creek, and the two hit it off, despite the age difference and the fact that Curly was three times divorced. He was smitten with her blend of athleticism, drive, and sweetness and became close family friends and a fixture at the van Duyse residence in Sturgeon Bay. Like Mary Jane, Lambeau was also of Belgian heritage, and her parents grew to love him and gave their cautious blessing to the courtship. In 1965 Lambeau proposed, but the strict Catholic girl could not marry a thrice-divorced man. The impasse over the marriage came to a heartbreaking conclusion on June 1, 1965 at 522 Michigan Street in Sturgeon Bay, when Lambeau died in the arms of Mary Jane’s father after suffering a massive heart attack while mowing the lawn and showing off a new dance he had learned in California called “the Twist.”

Six months later Mary Jane met Bill Sorgel, and six years later they would marry. Having devoted her life to her career, she retired from the Packers to focus her energies on being a wife. She would not be out of the spotlight for long.

Bill Sorgel loved to play the guitar and sing, and Mary Jane would twirl and dance to entertain their friends. One afternoon, their Yorkie, Muffy, wanted in on the act, so Mary Jane sat him on her head. To everyone’s amazement, the dog perched there while she danced and twirled. One of their friends taped the event and sent it off to David Letterman’s “Stupid Pet Tricks,” and a star was born. Mary Jane and Muffy would appear several times on Letterman’s show, including an anniversary special in which Mary Jane twirled live on a flight from New York to Miami at 25,000 feet with a costumed Muffy on her head.

Bill Sorgel passed away five years ago, and at her home today in Sturgeon Bay, Mary Jane’s thoughts often turn to her amazing life. The achievements and fanfare, she tells me, often seem like they happened to someone else.

“It’s just incredible, the journey, I can’t believe it,” she says with a grin and a shake of her head. But her dance students outshine even her Golden Girl years. “The most important thing I ever achieved in my career was with my students, and they still bring me joy.”