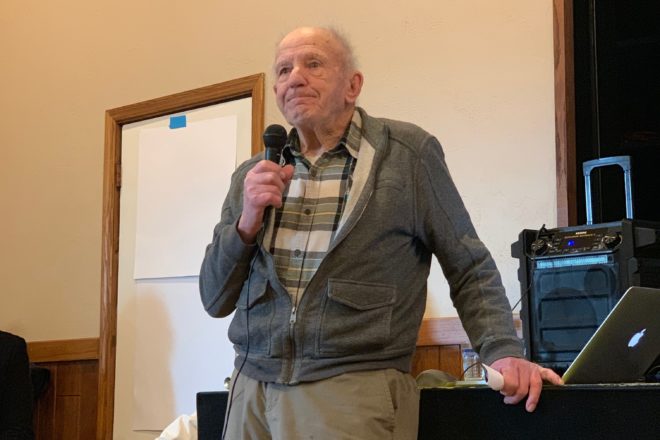 George Evenson speaks in support of restoring the Teweles and Brandeis grain elevator in 2019. Photo by Myles Dannhausen Jr.

Most of us are history keepers of a sort, in that we’re keeping our family’s past alive for our children and others who come after us.

In our Door County’s History Keepers series, we’ll focus on some of the dedicated people who keep Door County’s history alive for all of us and find out why they do it. They are passionate about researching the families that settled Door County and the good times and bad that have carried our little space on the planet through all the years since our story began. These are the people who help us to learn where we came from, how we got here and where we’re going.

When you’re talking about history keepers, it’s only natural to start with George Evenson.

Evenson is the third official Door County historian, following in the footsteps of Stanley Greene and Orville Schopf. When Evenson was appointed, he felt an official obligation to preserve local history.

Evenson was born on his parents’ farm on County P in Sevastopol, and the town has been his home for his entire life, aside from his college years in Madison.

“A passion for history is in my nature,” he said. “It was my favorite subject in school, and I’ve always been interested in learning about the past.”

Evenson came to realize that preserving history was a noble service: one that is dedicated not only to contemporaries, but also to future generations that he would never meet.

“If there’s no record, people will still be interested in what went on in earlier days, but they’ll have no way to appreciate the good things or to keep from repeating the mistakes,” he said.

Evenson has lived a farmer’s life, both the good and the bad. As he saw the agricultural ways of the peninsula fade, he and contemporaries such as Orville Schopf, Carl Scholz and Ralph Roth began working to preserve the lessons and ways of the diversified family farm, buying 40 acres of land on Highway 57 north of Sturgeon Bay.

“It was an appropriate place for what we wanted to do because it was part of the first commercial orchard in Wisconsin,” he said. “Swiss immigrant Joseph Zettel planted the first apple trees in Door County there in 1862.”

A barn and stable were added in 1966, and The Farm opened that summer.

“In the following years, log buildings were moved to the site from five Door County locations, and The Farm became a labor of love for the farmers involved,” Evenson said.

Eventually, it became one of the biggest tourist attractions in the county.

“People come back year after year to touch a cow or milk a goat,” he said. “I’m really proud of it.”

In 1999, St. Mary of the Snow Catholic Church in Namur was decommissioned and slated to be razed. Evenson was one of five people who purchased the building. Today it’s the impressive Belgian Heritage Center. He’s also served as president of the Door County Historical Society (DCHS) for 20 years, helping to steer projects to restore abandoned lighthouses.

And in 2008, a little “poking around” with Jim Maki led to one of the most significant architectural discoveries in Door County. When the DCHS created the Heritage Village at Big Creek in Sturgeon Bay, Ellsworth Peterson purchased five acres near the Crossroads Environmental and Historical Center at Big Creek to be added to the Heritage Village. There was an abandoned house on the property, the Hanson house, which was to be sold as a teardown. Maki and Evenson decided to check it out.

“Underneath the siding, we found logs carved in an unusual way so they fit together without chinking, and we soon realized we had uncovered a rare treasure,” Evenson said.

Darrell Henning, curator emeritus of the Vesterheim Norwegian American Museum in Decorah, Iowa, visited the property and was particularly stunned to find the house on its original site.

“It is one thing,” he told Evenson, “to see artifacts of history, but quite another to actually walk in the footsteps of those who made history, seeing what they saw from the very place they stood.”

Historic preservationist Alan Pape inspected the home and determined that it was built in 1855 in a style that was popular in 14th-century Norway – and that it was one of just two of its kind in the United States. With Pape’s help, the DCHS restored it, and in 2014, nearly 200 Hanson descendants from all over the country held a reunion at a place they hadn’t known existed.

For Evenson, the study and preservation of history is not just a way to look back, but a way to find a path forward.

“At some point in their lives, every generation will say, ‘Why are we doing this?’” Evenson said. “History helps us understand where we are and gives us a road to look back at the past and ahead to the future. If we know where we are, maybe we can figure out where we’re going.”