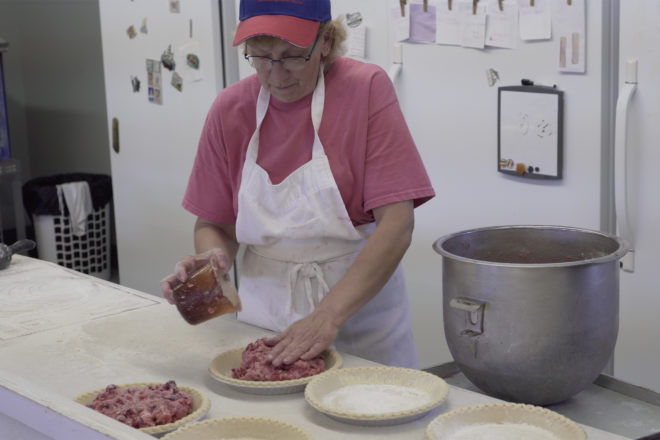 Tveten has been making pies for 15 years at Bea’s, and with her staff short at least two people this year, she’s pulling extra duty mixing, filling and crimping pies.

I stopped by Sunday, July 23, a designated pie day, to get some lessons on how to bake a perfect cherry pie from a pie-making pro. Upon arrival I was shooed behind the busy counter and into the kitchen where Tveten was scooping Bea’s homemade cherry pie filling into the last of 10 pie crusts laid out on a long prep table.

My sudden presence didn’t break her rhythm for even a moment, and as I introduced myself and explained what I was hoping to learn, she moved right onto rolling out dough for the tops of the pies.

“I could probably do this in my sleep,” she said, “especially this time of year.”

In eight hours she can make 160 to 180 pies, all in batches of 10. By late July her carpal tunnel flares up, causing numbness from her elbow to her hand.

“It goes away in winter,” she said with a shrug.

On this day she might make 100 pies, but maybe more. It’s Lavender Festival weekend on Washington Island, and Bea’s is the first business south of the ferry dock, bringing customers in waves with each boat of passengers that returns.

As she crimped the crust edges, she never glanced at the pie, making it look easy. Crimp, twist, crimp, twist, the pie tin spinning in rapid fashion, pies disappearing into the freezer till I realized she just knocked out another 10.

“You can tell who made the pie by the crimp,” she said. “Everyone has their own style. You have to find your own rhythm.”

My rhythm was ugly.

All the pies go straight into the freezer as soon as they’re prepared, even the ones they’ll bake on-site.

“One group buys about 30 frozen, unbaked every year,” she said.

After 15 years of prepping pies of all types (Bea’s offers 14 varieties all year, plus pumpkin pies in fall) I figured Tveten had lost her taste for Door County’s iconic dessert. I was wrong.

“Sometimes I’m here at 5 am,” she said. “If there’s a slice left over in the case, sometimes I’ll eat that for breakfast.”

While Tveten won’t share Bea’s Door County cherry pie recipe, she did share a few tips for aspiring bakers to use at home.

2. Don’t overmix your dough. “We mix the flour, salt and lard until it starts to crumble, then add cold water and mix only until it just starts to come together,” Tveten said. Mix it much more than that and your dough will get too tough.

3. Don’t forget to vent the top crust. “If you don’t, it will puff up, creating an air gap,” she said. “When you cut it, the crust will all break. When you bake it, you want to see the juice coming through the vent holes.”

4. Don’t roll your top crust too thin. “Your fruit will make the top crust look wet,” she said.

5. After baking, let your pie cool for a couple hours. Tveten said this allows the filling to set.