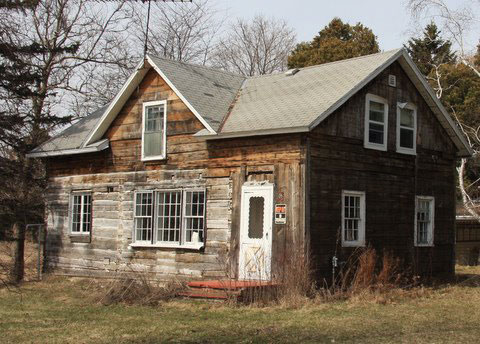 You’ve heard of amazing discoveries – a long-lost Rembrandt revealed beneath an amateur’s landscape or a signed first edition of Hemingway buried in a box of old books from an estate sale. Now Door County has a “find” of its own that is attracting attention statewide and is almost sure to earn a spot on the National Register of Historic Places.

In 2002, the Sturgeon Bay Educational Foundation purchased a five-acre tract north of Utah Street in Sturgeon Bay, not far from the Crossroads at Big Creek Environmental and Historical Center. The site had been deserted since 2000, and the frame house was expected to sell as a tear-down. It was not until 2008 that members of the Door County Historical Society (DCHS) took a close look at the structure and were intrigued to find 152-year-old logs underneath the clapboard siding. When plaster and lath were chipped away, the original whitewash was revealed on interior log walls. 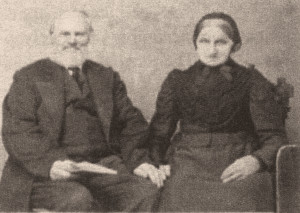 DCHS President George Evenson realized the significance of their discovery and quickly contacted two experts – Darrell Henning, curator emeritus of Vesterheim Norwegian American Museum in Decorah, Iowa, and Alan Pape, a historic preservation planner and consultant from Greenbush, Wisconsin. “These two men,” Evenson said, “know more about Norwegian architecture than anyone else in the country.” They called the house “a gem,” one of only three of its kind in the United States. It is even more unique – one in a million, they said – because it was found and will remain on the farm where it was built in 1856, just eight years after Wisconsin became a state and four years before Lincoln was elected President.

Research revealed that the builder was Hans Hanson, an experienced carpenter and ship builder who was born in Norway in 1815. With his wife, Bertha, and children, Gunnild and Knud, he emigrated from Hurum to Chicago in 1853. Knud died there before his second birthday. In 1855, the family, that now included daughter Kattin, moved to an 80-acre farm near Big Creek in what was to become Door County. The price was $250. The location had been identified on an 1834 map as the site of a prehistoric portage or trail for travelers crossing from Lake Michigan to Sturgeon Bay. 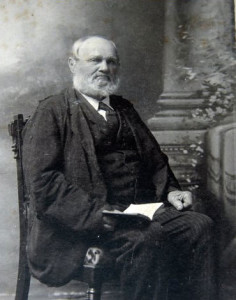 The family’s first home was a two-room log structure. Working with just an ax, Hans hollowed out the bottom of each log to fit tightly against the un-worked top of the log below. They were matched so closely that no caulking was necessary, but he tucked in sphagnum moss to make the building airtight, a technique dating to medieval times. Bits of it are still in place. Corners were dovetailed in the traditional Norwegian style. Two additional rooms and a sleeping loft, reached by a ladder, were added later.

When work on the Sturgeon Bay Ship Canal began in 1872, Hans was able to collect enough rock to build a full basement close to the original site. The cabin was disassembled and rebuilt over the basement. New, extra-long roof beams were cantilevered beyond the east end of the house to cover an unheated area or forstue that included the front entrance, storage and access to the new second story. This style, Henning says, dates to some of the earliest log buildings in Norway.

The Hanson house has undergone a series of five additions and renovations. The DCHS has decided to restore the home to Phase III, its appearance in 1875-1885, because a great deal of physical evidence remains from this period. The house had been expanded to include four bedrooms, a combination kitchen/dining room/living room, a pantry, a back entry/mud room, a front entry/stairway, a hallway that provided access to two upstairs bedrooms and attic storage, and a parlor u 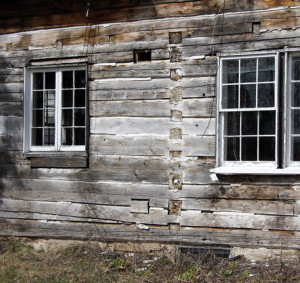 sed temporarily as a bedroom for Hans’ brother, Carl, who came from Norway in 1879 and died of asthma and measles the following year.

During this period, the outside of the house was covered with horizontal clapboards, and a cream brick chimney was installed in an upstairs bedroom. Interior log walls were whitewashed, ceilings, partitions, doors and trim were painted light olive gray and floors were stained walnut brown. Kerosene lamps were mounted on iron wall brackets, and heat came from wood-burning stoves. A stovepipe running from the kitchen range to the chimney in the bedroom above provided the only warmth for the upstairs. Drinking water was obtained from a spring Hans capped. (It was still in use in 2000!)

The 1880 Census reported seven people living in the house:  Hans, age 65; Bertha, 63; Gunnel, 29; Catinka, 25, born during the family’s time in Chicago; Hans Jr., 21, and Elisebeth, 18, both born after the move to Wisconsin; and Carl, 47. By 1890, Hans Jr., had married Gustava, and their children, Clara, Hammeril, Ester, Arthur, Elmer and Bertha, were sharing the house with Hans Sr., Gunnell and Elisebeth. The elder Bertha had died in 1899. Hans Jr. and Gustava had three more children, Adolph, who died at age four, Kenneth and Don 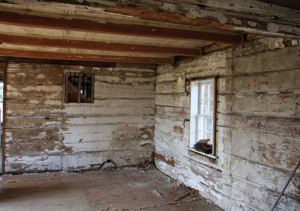 During their years in Chicago, the Hansons attended a Lutheran church, but in Wisconsin they became Moravians and were close friends of the Rev. Andrew Iverson, who founded the Ephraim Moravian Church and, with Hans’ help, established a congregation in Sturgeon Bay in 1863. Concerned because the Hansons were not present at his farewell sermon there in June 1864, Rev. Iverson went to their home and found the family sitting in a field, watching a brush fire that had destroyed their barn and was threatening the house. In Ephraim’s Founding Father, Paul and Frances Burton describe how Rev. Iverson, Hans and Bertha went into the house, fell on their knees and prayed “as if their hearts would melt.” The house was saved.

In a 2009 letter to Evenson, Pape noted that “few examples of the Norwegian scribe-fit sval log house construction are to be found outside Norway, and only two have been saved thro 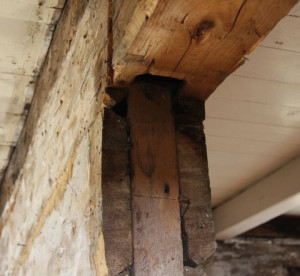 ugh museum restoration in the United States. Many evolutionary secrets are yet to be discovered that will help in the structure’s eventual restoration. To have the house actually connected to the Crossroads Museum Village property is truly a one-in-a-million event.”

Henning has called the house the most significant architectural find in Door County. “You are extremely fortunate,” he said, “that the house sits on its original site, which will provide significant data when properly excavated and interpreted. It is one thing to see the artifacts of history, but quite another to actually walk in the footsteps of those who made history, seeing what they saw from the very place they stood.”

The goal of the Door County Historical Society is to restore the house, repair outbuildings and plant flower and vegetable gardens to recreate the site as the Hansons knew it. A heritage trail will connect it to the Crossroads Historical Village. Interestingly, the village’s pioneer church is a replica of the one Rev. Iverson started in Ephraim in 1859. Another recently-discovered fact is that the Hanson farm was later owned by Professor Moulton G 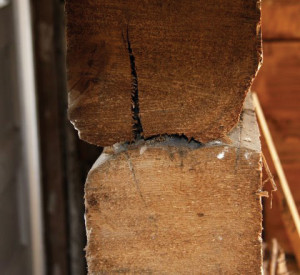 roff, whose cherry orchards were among the first in Door County.

Gustava Hanson died in 1918, and the following year the rest of the family moved to Daggett, Michigan. Relatives still in that area knew nothing about the original homestead until they were contacted in 2009. Since then, they’ve made two trips to the site, and Hans and Bertha’s great-great-great grandson, Thaddeus Nowak, developed the Hans Hanson House Web site, hanshansonhouse.org.

The restoration cost is estimated to be $140,000 over two years. It is hoped that grants will cover much of that amount, but contributions are also being sought from individuals and groups. Contact George Evenson at 4994 Ripp Road in Sturgeon Bay or by phone at (920) 743-4945.

By 2011, you may be able to stand in the front door of Hans Hanson’s house and gaze east toward Big Creek over a landscape that looks much different from the modern world on Utah Street, 140 feet and 136 years away.