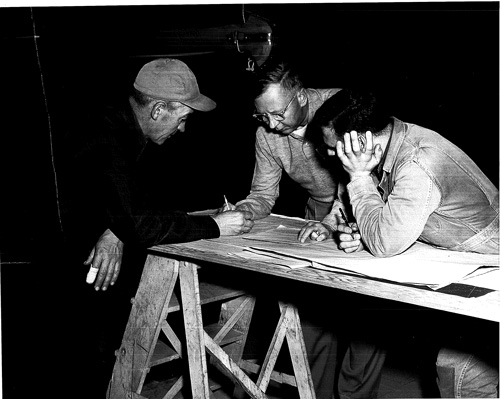 Taking a stroll through the Sturgeon Bay shipyards can be a humbling experience. The immensity of the ships alone can leave one awestruck with veritable wonder at how such behemoths were constructed, let alone how they even float. For nearly 100 years, the assembly and maintenance of barges, freighters, ferries, and sailboats in Sturgeon Bay has contributed to the city and the county’s rich maritime history, and while the finished product is impressive, the inception of these vessels is born from the minds of some of Door County’s most unique individuals:  naval architects. 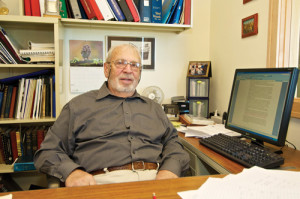 A Niche of the Industry

Naval architecture is one of the many disciplines of engineering, which focuses on the design, production, and maintenance of marine structures and vessels. While that definition may sound standard enough, the challenge and complexity of their task as engineers boggles the mind.

Designing marine vessels, whether it’s a 30-foot research vessel or a 300-foot barge, demands myriad engineering skills. Mark Pudlo, president and naval architect of Seacraft Designs in Sturgeon Bay, cites the complexity of their work as one of the most unique aspects of the vocation.

“In our niche of the industry, we must be multi-disciplined,” Pudlo says. “We’re not just naval architects. We’re structural designers, electrical designers, ventilation system designers.”

He continues, “Not only do you have to make all these systems work you need to make them fit in a confined space. As engineering challenges go, it’s pretty extreme.”

One look at a cruise ship or a freighter verifies that these vessels must function with all the same infrastructure of a town, supporting not only the cargo on board, but the human life as well. 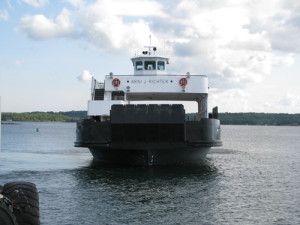 “The naval architect is, of necessity, a master of approximations.”

Engineering, in general, seems underpinned by the concept of exactness. For naval architects, however, that exactness is not so simple.

“Everything is an approximation. Since what we design is always in motion, it’s always changing,” Smith explains. “Whether [the vessel] is in fresh water, whether it has a full fuel tank, 30 people, 300 people, cars, trucks, the different trims and speeds and waves and weather conditions…and then it must perform in all those scenarios.”

Lauren Balza, a naval architect employed at Seacraft Designs, as well, explains this concept in comparison to what architects and engineers on flat land are dealing with: 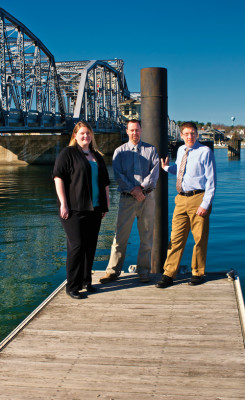 “If you think about designing a building, you draw the front face of your building, and then you just make it strong enough to stay like you’ve drawn it. But if you’re designing a boat, then depending on if you need a ‘go-fast’ boat or a boat that’s going to ride well in big seas, it’s going to change the shape of the hull. The more you change that, the more it’s going to matter where the weight is on the boat, because you don’t want it to trim too much at the bow or stern. It’s like hitting a moving target.”

The factors a naval architect must consider during the design process seem endless. Perhaps due to the multiple skill sets one must possess, the list of educational institutions that offer a degree in naval architecture is relatively brief. In fact, there are four in the country.

All three naval architects at Seacraft Designs attended Webb Institute in Glen Cove, New York, the school considered by most to be the longest-standing and most prestigious institution where one may earn a naval architecture degree. The school is also completely tuition-free. Due in part to this, and to its outstanding reputation, admission is competitive.

“There are only 25 graduates a year from Webb who earn a Naval Architecture and Marine Engineering degree,” Smith says.

Naval architecture is the only course of study at Webb, so everyone who attends focuses heavily on that program and is highly prepared when they enter the field. Balza, Smith, and Pudlo all found their way to Sturgeon Bay through Webb, and really, through a fellow naval architect named Tim Graul. 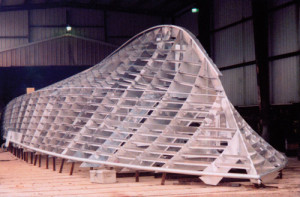 course of study at the University of Michigan, Ann Arbor and started Timothy Graul Marine Design in 1981 in Sturgeon Bay. During the winter of 1986-87, Pudlo did an internship with Graul at his firm and decided to return to Sturgeon Bay after graduation. In 2007, Pudlo purchased the assets of the company to form Seacraft Designs. This type of intertwined business structure is highly typical of the Sturgeon Bay shipbuilding industry.

Graul’s own expertise with naval architecture has brought him around the world and right back home to Sturgeon Bay.

“The best time of my life was working at Peterson’s,” Graul says. When he first moved to Sturgeon Bay in 1972 from the St. Louis area, Graul came to work for Peterson Builders, one of Sturgeon Bay’s shipbuilding outfits.

“Peterson’s versatility – building in steel, wood, aluminum and fiberglass – was a p 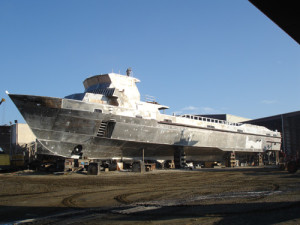 erfect opportunity for a fledgling naval architect to learn more about the shipbuilding business,” Graul says.

Historically speaking, shipbuilding in Sturgeon Bay began with the name Leathem D. Smith Shipbuilding which began building boats in 1918. When Smith drowned tragically in a squall during a return sail from Menominee, Michigan in 1948, the company was renamed Christy Corporation, and eventually it would become Bay Shipbuilding, another name synonymous with boat design as we know it today.

That fateful boating accident, however, also spawned another company: R.A. Stearn, a design firm started by its namesake Richard A. Stearn. Some call Stearn, another Webb graduate, the “Dean of Great Lakes Naval Architects.” R.A. Stearn designed ships in Sturgeon Bay, and does today under the name Bay Engineering, Inc. The company changed hands in 1996, when maritime veteran Joseph P. Fischer purchased the assets. To know Fischer’s life story is to know the life of a naval architect on the Great Lakes.

Fischer’s family moved to Liberty Grove Township in 1932, living first on the site of his father’s small cheese factory near County Highway Q and Highway 57, then later on the property where highways 57 and 42 meet (the site of 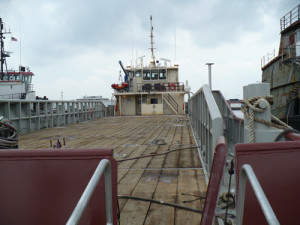 the current day Sister Bay Visitor’s Center). In 1940, his family moved to Sturgeon Bay where he would begin a 60-plus-year career in the maritime industry, much of it in the Sturgeon Bay shipyards.

Out of high school, Fischer began work as a loftsman for Christy Corporation. A loftsman performs a critical task in the design process.

“The mold loft [at Christy Corporation] was on the top floor of the building and looked like a big dance hall,” says Fischer. “You work on your hands and knees, like a carpenter. You would draw the lines of the ship with battens and create a scaled version of the ship.”

One of the most notable ships he lofted while there was the famous S.S. Badger, the car and passenger ferry that runs across Lake Michigan to this day.

After fighting for the U.S. Army in the Korean War from 1951 to 1953, he returned to Sturgeon Bay to work as a loftsman for Palmer Johnson Yachts. He studied first at the University of Wisconsin – Madison, before finishing his degree at University of Michigan – Ann Arbor in 1959. From 1958 to 1977, Fischer worked for R.A. Stearn as the Vice President of Engineering, and then as the Vice President of Operations. 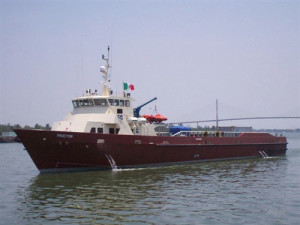 Fischer spent time working for the American Steamship Company in Buffalo, New York, where, as Vice President, Operations, he got to operate some of the same ships he had designed at R. A. Stearn. When he returned to Sturgeon Bay in 1986, a home back at R.A. Stearn was waiting for him.

“Everything intertwines here in this small town,” Fischer says of the Sturgeon Bay maritime industry. Indeed, they do and naval architects seem to be at its core. Nation-wide naval architects are hardly a dime a dozen, but in Sturgeon Bay, there’s a unique concentration. 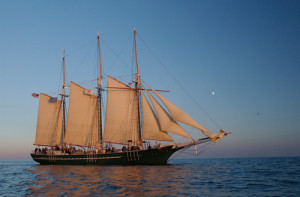 “Active” is an interesting word to use, since it seems clear that the word “retirement” is a dirty word to naval architects. At 81, Fischer shows no signs of letting up.

“This is what I do,” he says. Graul, whose business exists now to serve workboat designs and marine survey, reflects a similar sentiment.

“I think we’re just totally consumed by our work:  its constant challenges and the opportunity to learn new things,” says Graul.

Other than technology and regulation shifts, the business of designing and engineering boats seems unchanged over the years. Here in Door County, the naval architects have been party to some noteworthy vessel designs.

During Pudlo’s tenure with Tim Graul, they designed a ship called the Denis Sullivan, a three-masted, wooden schooner. The ship was designed as a “tall ship” which would educate people about the Great Lakes. 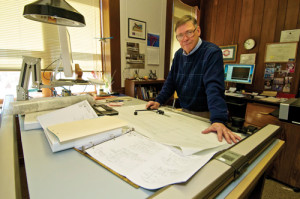 “Denis Sullivan was our ‘Mona Lisa.’ It was our masterpiece,” Graul says. Graul and Pudlo also designed the Washington and the Arni J. Richter, both ferries for the Washington Island Ferry Line.

These days, one of the main facets of naval architects’ jobs is facilitating the “re-powering” of ships. Re-powering involves changing the way a vessel is propelled. Recently, Fischer has been involved in a project with the Great Lakes Maritime Research Administration that is seeking information about re-powering the SS Badger from coal to natural gas. Fischer recalls working in the mold loft as supervisor from midnight to 7:00 am on the Badger.

“Ironically, here I am 60 years later looking at changing that ship over to fuel,” Fischer says.

The story of a naval architect is synonymous with maritime history in Door County. Their influence not only in the shipyards of Sturgeon Bay, but in the community has left a mark that will go down in our collective history.

The life of a naval architect may take them many places, but passion for what they do seems to be what continues to drive them.

As Graul said, “It’s been a fascinating trip, and I’m still afloat.”