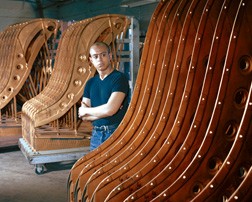 With five performances already completed at the Door Community Auditorium during the month of August, the Peninsula Music Festival (PMF) will wrap up its 59th season with four more performances.
The second week of the festival will conclude with a PMF debut of Verdi’s Messa de Requiem on Saturday, August 13, 6:30 pm. The Apollo Chorus returns to the festival and joins with the PMF Chorus. The performance will feature soloists Kimberly McCord, soprano; Tracy Watson, mezzo-soprano; Hoss Brock, tenor; and Jacob Lassetter, baritone. A pre-concert discussion will be led by Maestro Yampolsky and Associate Conductor Stephen Alltop. Admission to the 5 pm talk is $5, and a boxed dinner may be pre-ordered for just $10.
The final week of this season begins on Tuesday, August 16 at 8 pm with an all Tchaikovsky program. Eighteen year old, 2011 Avery Fisher Career Grant winner and Grammy nominee, Caroline Goulding will make her PMF debut in the Tchaikovsky Violin Concerto. The concert concludes with Tchaikovsky’s Fifth Symphony, previously performed by the PMF in 2000.
Thursday, August 18, 8 pm Stewart Goodyear will return to the PMF stage, filling in for pianist Inna Faliks who had hoped to fulfill her engagement but was not cleared to travel in the eight month of her pregnancy. Goodyear will perform the Liszt First Piano Concerto. The concert begins with the Liszt symphonic poem Orpheus and concludes with Berlioz’s orchestra tour de force, Symphonie Fantastique.
The festival will come to a close on Saturday, August 20 at the 6:30 pm concert. Pianist Norman Krieger will perform the Brahms Second Piano Concerto in his PMF debut. The 59th season of the festival closes with the second PMF performance of Richard Strauss’ Der Rosenkavalier Suite.
All concerts are held at the Door Community Auditorium with reserved seating and air conditioning. Attire is vacation casual, and tickets for each concert start at just $30. (Students and children are $10 for any concert.)
For more information or to reserve tickets call 920.854.4060, visit http://www.musicfestival.com, or stop by the Box Office, located at 3045 Cedar Street in Ephraim.