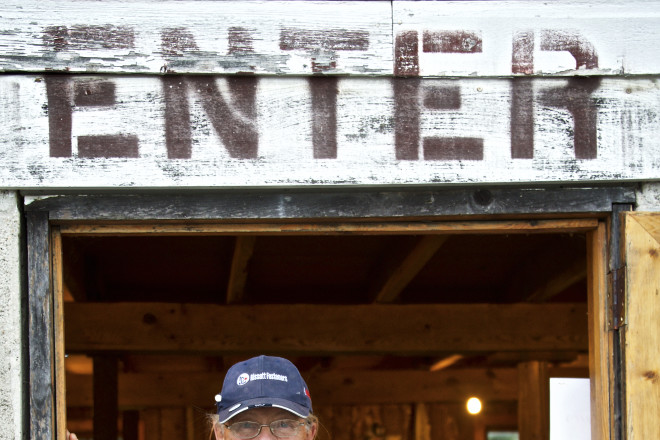 For most of the past 40 years, Dave Ellmann has rolled into Door County in May, fresh off a winter waiting tables in Florida or Hawaii, back to do the same here, his Door County Farmhouse waiting for his return.

The anticipation of summer buzzes, calling Ellmann home, where he is a walking, breathing symbol of the season with a ballcap slapped over his silver ponytail, surprisingly determined eyes behind wire-rimmed glasses, a face in perpetual tan.

There are many people who live the seasonal Door County lifestyle for a time, basking in the best of the peninsula’s summer months before darting off to work through the winter on the beaches of Florida or Texas, or the ski hills of Colorado. Some manage to extend the routine over a decade, a few even longer. But nobody has lived this bipolar existence so long and spectacularly as Ellmann, Camp David’s Master of Ceremonies. 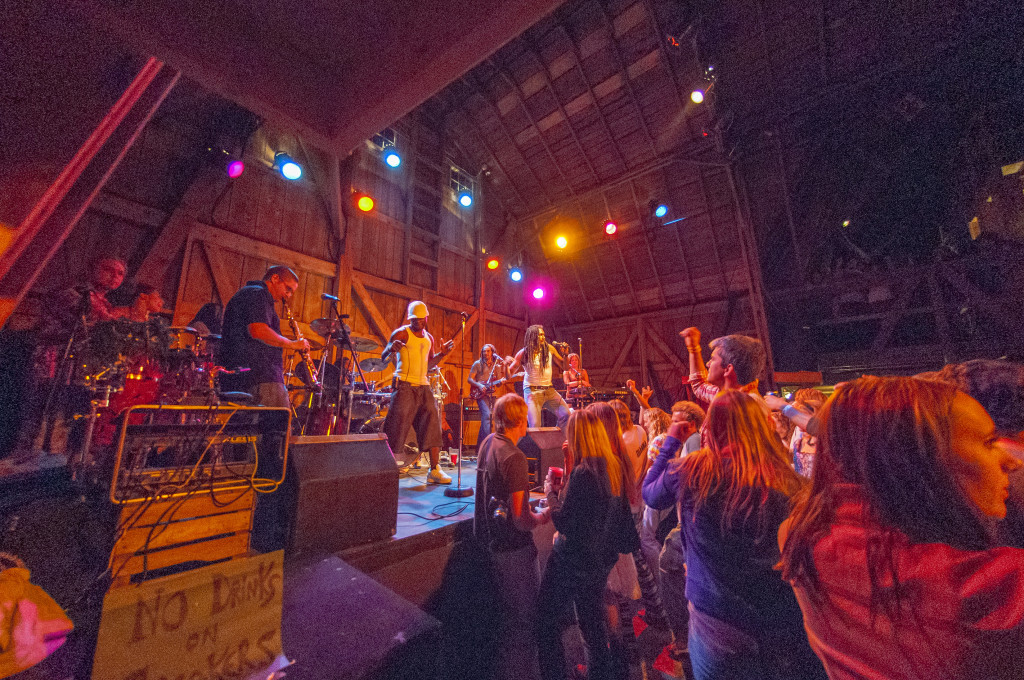 Unity the Band has performed several 4th of July weekend shows in the barn, always to raucous dancing. Photo by Len Villano.

To many, Ellmann’s life is seasonal Door County to perfection. He swoops in when the weather is at its best, with a home to return to on a farm of legend. Each summer 17 seasonal workers come to live on his property, a former dairy farm about a mile down County F from the Greenwood Supper Club in Fish Creek. They pay a couple hundred dollars a month to earn the special badge of being one of the long line of Happy Campers, a far cry from any other kind of Door County living.

Cathy Hoke, now the executive director of the Peninsula School of Art, lived at Camp David in the early 1990s and describes Ellmann as “part Peter Pan, ever the optimist. He really does genuinely believe that people are good.”

“Living there, it’s communal, there’s no other way to put it,” she says. “You have an obligation to the other people you live with.” 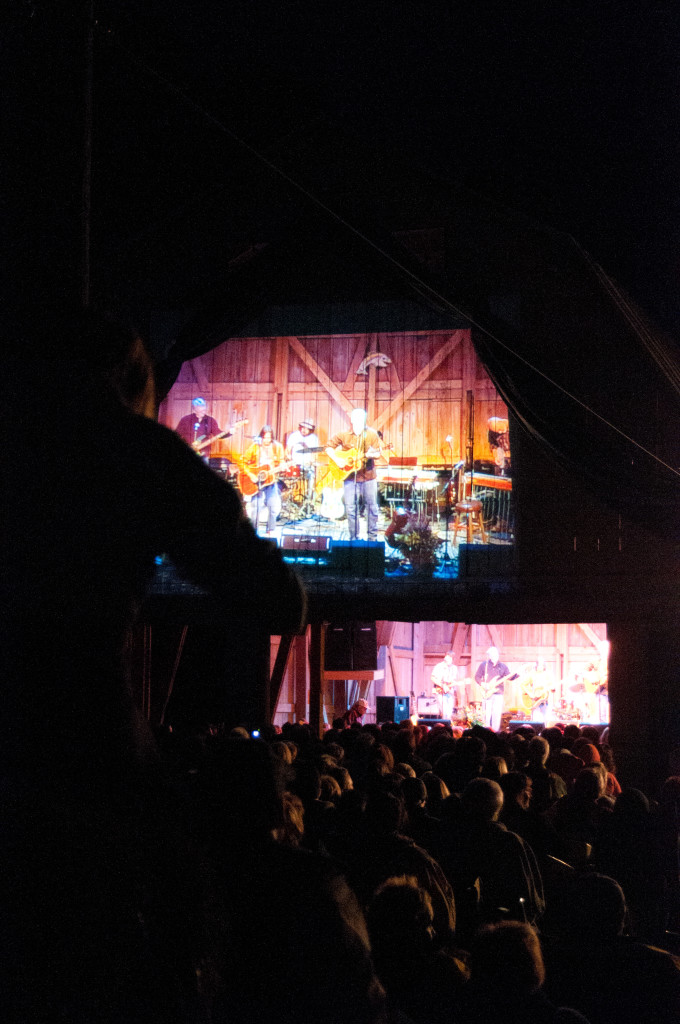 When crowds grew too big for the barn, Ellmann began projecting the concert on the wall outside for the overflow, creating a combination drive-in and concert feel at the barn.

Ellmann is not so much a landlord to his tenants as he is an uncle of sorts. Residents help in the garden if they want, pitch in to build the annual Camp David Fourth of July Parade float (a legend of its own), and gather for group dinners.

Hoke said that when she lived there, spaces would get repurposed on a whim. Someone would get an idea, and Dave would send them off with it. Hoke created an art studio out of one room, “just because it was available.”

And the Happy Campers will have fun. They’ll join Ellmann to sail on his 25-foot sloop, or to play on the Camp David volleyball team, the Chicago Cubs of the Northern Door Volleyball League. They’re almost always near last in the standings, but first in enthusiasm, facial hair, and fun, with Dave there every week to cheer them on like all-stars. Generations of summer workers and locals tell tales of the parties on the farm, some massive and organized, some random and chaotic. 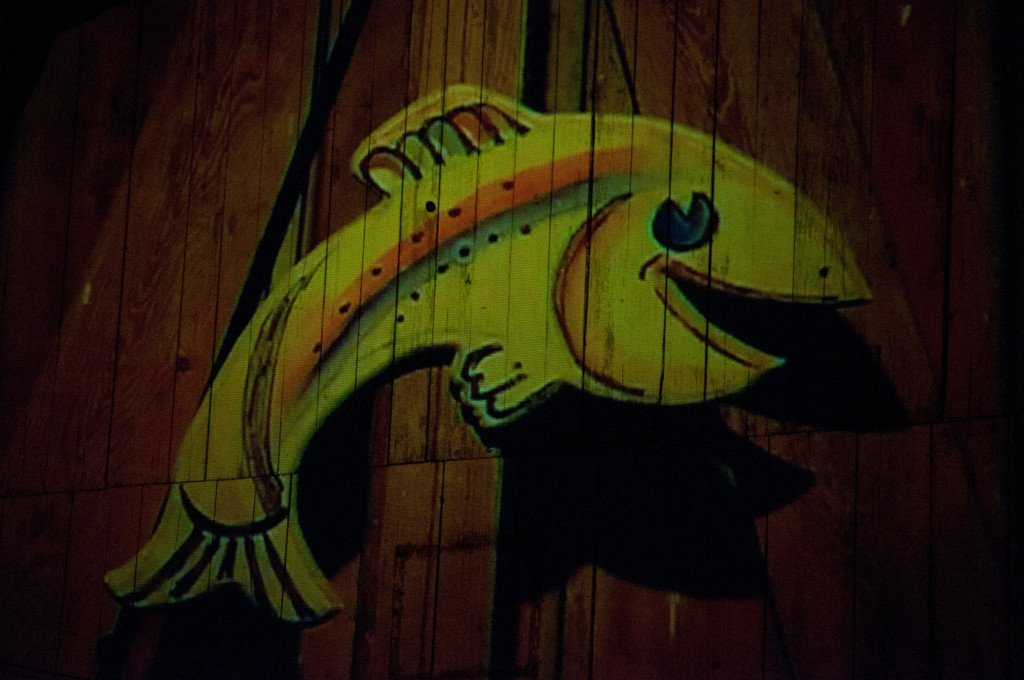 The Fishstock logo behind the stage. Photo by Dan Eggert.

In the late 1980s, Ellmann began throwing an end-of-summer party for residents and friends, selling buttons for $5 to help cover the cost of the beer, corn, burgers and brats he gave away free to all who showed up, an expensive proposition when the party swelled to an estimated 1,500 people a few years later. He took a lot of flack for those bashes from neighbors, the Chamber of Commerce and police, and it helped earn Camp David a less than stellar reputation in some circles of the county.

Still, Ellmann continued to give his residents freedom as long as they respected the grounds. His rules are few and simple: No Stealing, No Dealing, No Violence.

“He’s there, he’s hands on, and he’s interested in them, not just in being good tenants, but in that their lives are happy,” says longtime friend Andy Coulson, owner of the White Gull Inn, who admires Ellmann’s ability to be relaxed, friendly and personable in almost every encounter. “He has rules, but it’s a very casual atmosphere. They have their garden, he’ll cook a big dinner and share it with the kids. He tries to make sure they have a good experience there.” 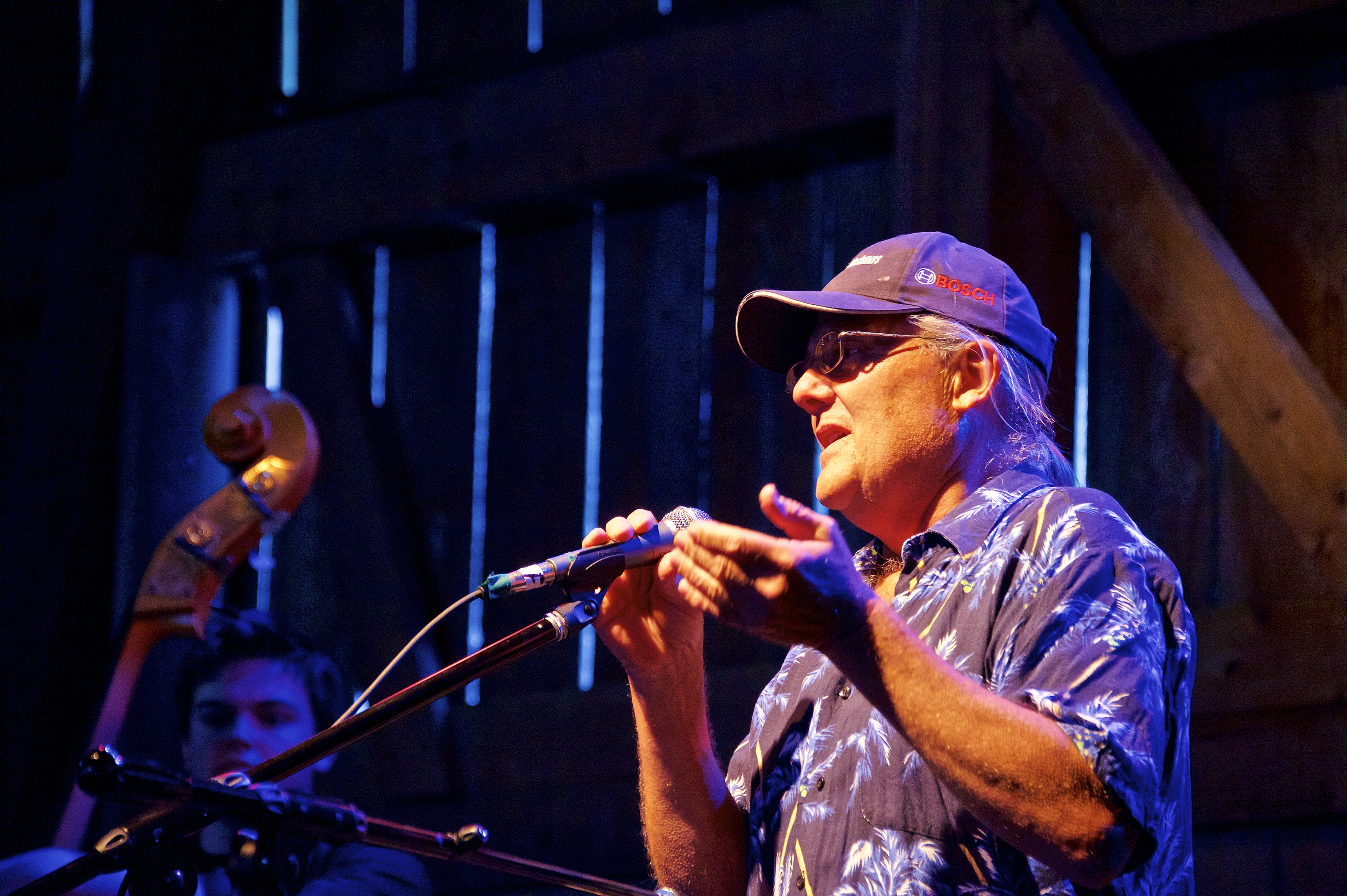 Ellmann says all of that is true, but there’s also a practical purpose to his approach.

“You’re not gonna make much money getting $250 a month from college students,” he says. “You have to be there. Or, if they’re like I was as a kid, they’ll tear the place apart.”

Hoke says she learned a lot about the county living amidst a mix of old and young, people who knew where the bodies are buried and those just getting their feet wet.

“We got to know this place in a different way than you would living somewhere else,” she says. “It changed my whole idea of being a part of this community. Never underestimate the person across from you because you have no idea what they know and what their experiences were.”

Experiences like those of Ellmann, the nomadic hippie who spent a couple of youthful summers traveling with a carnival to pay for college, but who also happens to own an undergrad degree from the University of Wisconsin – Milwaukee, a master’s from UW – Madison, and once taught in Wisconsin schools and in Europe. A man who turned a farm into one of the only seasonal housing sources in Northern Door, then enlisted the help of friends to turn that farm into something that became revered locally and regionally, the Fishstock Concert Series. 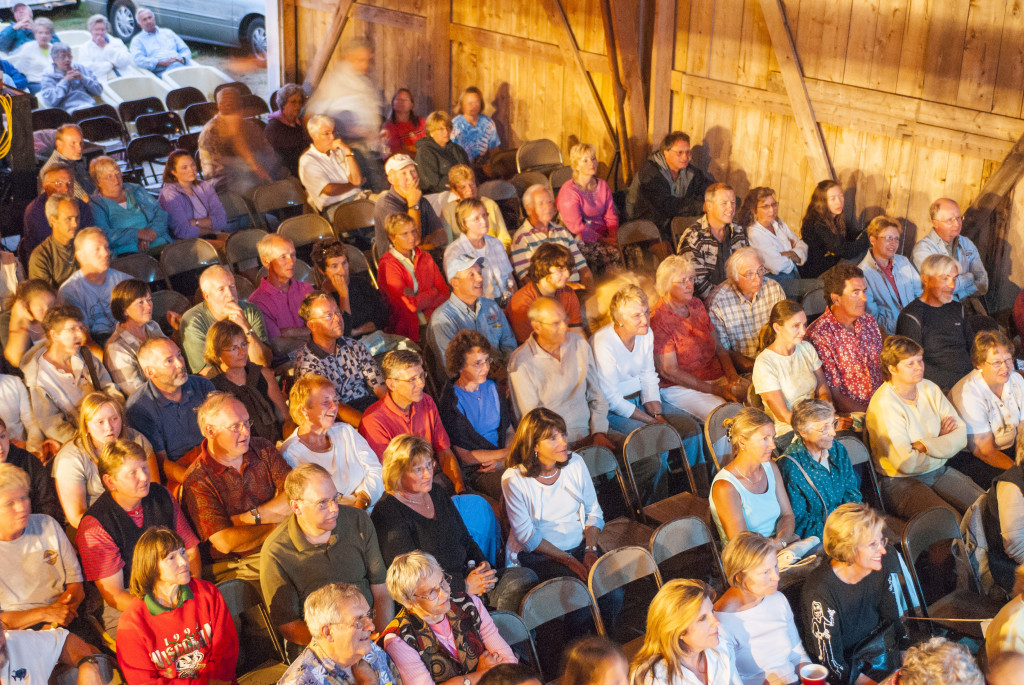 An enthralled crowd is just fine with Camp David’s metal folding chairs at a Fishstock concert. Photo by Len Villano.

For 20 years Ellmann has hosted concerts in the big barn, a venue with professional sound and lighting, but where the summer breeze still sneaks through the cracks and doors. When the crowd swells to several hundred, a video of the show is projected on the outside wall of the barn for those squeezed out.

The series, whose name is a combination of Fish Creek and Woodstock and was coined by Stewart Dawson, began in the small upstairs loft of the barn with musicians from American Folklore Theatre playing on their Sunday nights off. Eventually it grew into the larger space of the main barn, and Ellmann brought in top bluegrass and folk acts, introducing a new crowd to the genre and turning many musicians into local celebrities.

“There was some bluegrass up here in the ’70s,” says Coulson, a bluegrass player himself for the band Highland Road, “but the whole live music scene and bluegrass in particular had withered away. Fishstock opened people’s minds up to that kind of music again.”

Ellmann’s nephew, Jon Ellmann, was one of those whose minds were opened.

“I used to think a good concert was rock ‘n roll, hip hop, blues,” Jon says. “That was my narrow-minded self. Then, to be exposed to Eric Lewis and Jimmy Davis in my late teens was definitely eye opening. I would sell friends on the barn and atmosphere, and by the end of the night they would be blown away by the music. It completely changed my perception of music and my tastes.”

Those concerts did something else, too. This place once renowned – or notorious, depending on your point of view – for the hard-partying ways of its residents and owner, welcomed a largely graying crowd. Yes, there were still plenty of young folks sporting flip-flops and beards, but the base of Ellmann’s crowd could be their parents, maybe their grandparents.

“The people that supported it tended to be retirees and older people,” Coulson says. “I think some people started looking at the place differently after that.”

Camp David and its owner, who Coulson calls “the eternal summer employee,” all grown up.

This summer will be Ellmann’s last running the concert series. His brother Steve, who has handled concert sound here for years, will take it over in 2016. 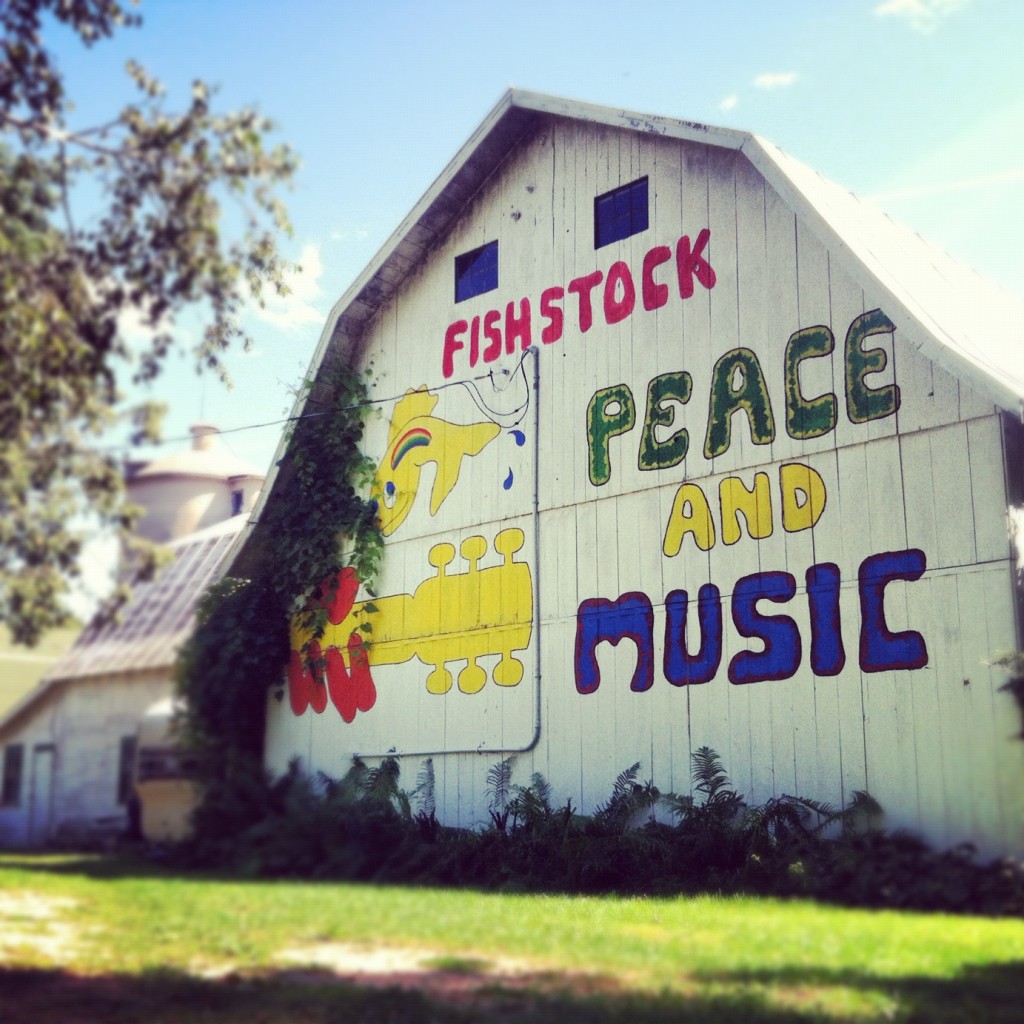 Stewart Dawson painted the imagery on the barn that has since become a landmark on CTY F outside Fish Creek. Photo by Myles Dannhausen Jr.

“After this summer, I’ll be debt free for the first time in my life,” Ellmann says. “Steve is a helluva lot better musician with a better ear than I have, so he’ll take it in different, better directions and bring in a new audience.”

You get the sense from Ellmann that maybe it has become too much business now. After all, it all started as a party.

“As a kid, we just went there to help paint the barn, have family picnics, get chased by ‘Uncle Leaker,’ which we called Dave for some reason,” his nephew says. “I thought every family had a crazy uncle you went to hang out with.”

“He’s driven by relationships,” Jon Ellmann says. “I think when it started there was this little hint of a business aspect, and he was probably aware there was a need for housing, but it’s always been about people.”

And so when the summer ends, he’ll release the reigns of Fishstock, leaving the hippie who still doesn’t own a cell phone more time to shepherd his flock of residents, work his garden, and sail through his summers.