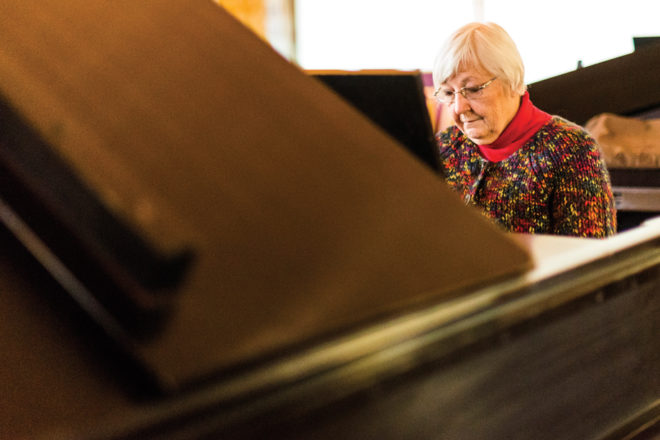 Gladys Reeves Austgen, affectionately known as “Door County’s piano teacher,” had an unorthodox beginning to her career, growing up on one of the many truck farms in the area that’s called Rosemont today — around what is now Chicago O’Hare Airport. She and her older sister attended a two-room country school, where there were just three students in Gladys’ first grade class.

The teacher volunteered to give the little Reeves girls a ride home each afternoon and as they waited for her to finish grading papers, six-year-old Gladys sat down at the piano in the hall and played — with two hands! — songs the students had sung that day. Amazed, the teacher reported to her mother that Gladys had unusual talent and should have lessons.

As a youngster, Elizabeth Reeves had played well enough to be featured on a radio program and was happy to find a teacher for her daughters. After a week or two, the teacher noticed that when Joyce, the older sister, played through her assignment, Gladys would take her place at the piano and repeat exactly what Joyce had just completed. The teacher took away the John Thompson’s music book and Gladys played on. Obviously, she wasn’t reading notes but playing by ear. The teacher reported to her mother that the child was unteachable.

Nevertheless, the “unteachable” little girl was soon playing at church. She needed the hymnal in front of her to follow the words but the notes were all in her head. She practiced for hours — nearly always hymns — and if she became bored, she simply experimented with transposing the songs into different keys. She still wasn’t reading music but she was fascinated with the strong relationship between music and math — if the notes climbed up on the staff, the sound was higher.

She was especially intrigued with chords and how changing their key was like altering a math equation.

“Music is nothing more than math with feeling,” she says now. “I’ve always loved to sit down to play, not knowing what was going to come out. People who play only by note are like people who read a book out loud. They can only read the words that are written. They can’t make up their own story.” 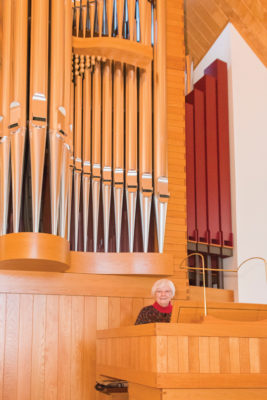 Not just music, but sound in general has always fascinated Gladys.

“The refrigerator hums at a certain pitch,” she says. “It might drive some people nuts but I love anything with sound. I’ve always liked to figure out the pitch of any machine.”

“That gave me confidence to read music as it was written,” she says, “but I could always add other notes by ear. Often I would play and not think of a known melody, but just make one up or add my own touch to a well-known song. Sometimes my hands went to notes that were not written, composing new music. I shouldn’t have stopped the lessons, but I was busy with schoolwork and working at Kresge’s 5-and-10.

“I did learn to read the notes during those three months, but I also learned much more by listening to other pianists and noting how they played and by listening to my sister practice her lessons and reading her Thompson lesson book,” Gladys continues. “You can learn a lot if you listen. That’s why I encourage piano students to continue to study.”

After high school, Gladys went to work in the Electric Motor Division of General Motors in the western suburbs of Chicago, first as a keypunch operator and later as a junior tabulator operator on an IBM 650.

“Computers were very different in 1960,” she recalls with a chuckle, “as big as a room.”

By this time, she was in demand as both a pianist and a vocalist at church, for Lions Club activities, and at a funeral parlor in La Grange. It was at church that she met the new choir director, George Austgen, who had a “fantastic tenor voice.” An electrician by trade, he sang on the radio and soloed in the Messiah. A widower, he had three little girls, ages four, seven and nine. He and Gladys were married in 1960 and added three more children to the family in the next three years.

While the children were young, Gladys taught piano and organ at their home in La Grange. In the 1970s, she began teaching piano on Saturdays at the Lyon & Healy studios in Oak Park.

In 1971, at the invitation of Aymond Anderson, who had heard George sing in Chicago, the couple came to Door County to sing a concert at Bethel Baptist Church.

“We fell in love with the beauty of the county and the wonderful people who live here,” Gladys says. “We came up every year to give concerts and finally retired here in 1990. We bought Dr. Farmer’s home in Liberty Grove. We were only the third owners since the house was built by the Carlson brothers in 1930. Now our son, Dan, lives there with his wife, Valerie Richter Austgen, and their children, Isabelle (a budding pianist), Matthew, Sarah and Logan.”

The plan to retire in Door County didn’t exactly work out. Almost immediately, Gladys was asked to take over temporarily the piano students of Kim Larson, who was expecting a baby. After Kim’s baby was born, she decided not to return to teaching right away so Gladys continued with 55 students a week. Knowing so many Gibraltar students through teaching, she was a natural choice to serve as accompanist for their vocal and instrumental solos at regional and state music contests.

Her feeling about kids and music:  “I’d like to see more kids playing music instead of little video games. They aren’t learning anything.” She has special words of praise for Charlie Eckhardt, band director at Gibraltar High School, who enhances the love of music for so many young people.

For 10 years, Gladys was the assistant director of Peninsula Chamber Singers, now known as Peninsula Singers, and also served for two years as the accompanist for the Door Men vocal group. For 20 years, she’s played for the Ephraim Sing-Alongs on Sunday nights during the summer in the village hall. These are just side activities.

Since 1992, Gladys has been director of music at the 400-member Shepherd of the Bay Lutheran Church. It has a strong and enduring tradition of fine music and Gladys loves working with Judy Jackson, principal accompanist, Greg Beem, principal organist, and a choir of about 40 that sings at services every Sunday of the year. Through the years, Gladys has directed the choir and hand bells, and played organ and piano.

Before taking this position, Gladys had never worked with a Lutheran church. She grew up in Baptist and Congregational churches and had worked as music director in Baptist and Reform churches in the Chicago area.

“I’ve learned a lot from the different congregations,” she says.

For a decade, Gladys and Judy held Festivals of Praise, drawing up to 70 voices from smaller churches in the community where there wasn’t the opportunity to sing with a large choir. The concerts raised between $30,000 and $40,000 for local charities. For a number of years, they sponsored sing-alongs of the Messiah. For eight years, they presented an annual Bach Sunday, with a choir directed by Judy that sometimes included singers from the Chicago Lyric Opera whom Judy had coached. Judy did research for each of those programs, determining what scriptures Martin Luther had used on the corresponding date nearly 500 years ago.

In 2004, Shepherd of the Bay got a pipe organ. The organ selection committee followed up by arranging a series of concerts with freewill admission that covered the cost of guest organists. They continue to present six performances a year.

“At Shepherd of the Bay, we welcome anyone who likes to sing,” Gladys says. “A few years ago, a fellow from a music publishing house in Carol Stream, Illinois was visiting in Door County and came to hear our choir. He couldn’t believe that a group of white-haired people sang with such life and made a video of them to show to people back at work. That was fun. Don’t write old people off!”

Gladys stopped teaching after George died in 2004. A slight stroke a few years later might have defeated a less-determined woman, but she recovered completely.

Now 77 and living at Scandia Village, Gladys thinks she might retire when she’s 80. But don’t count on it. Remember, she planned to retire in 1990, too.