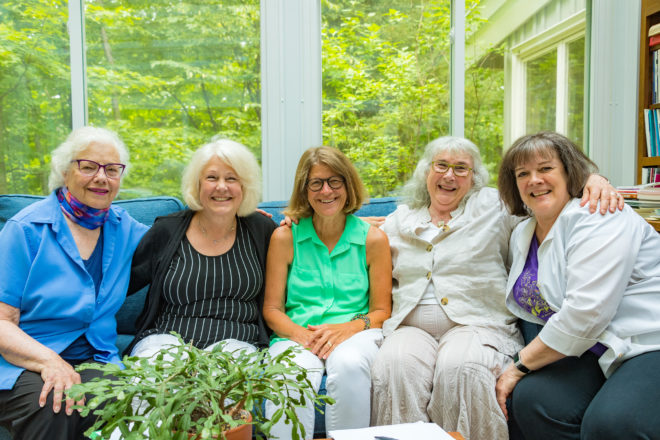 So said Door County Poet Laureate Nancy Rafal upon taking a poetry-appreciation class at The Clearing Folk School in the early 2000s. After a decades-long break from writing poetry seriously, she found herself hooked again.

The Wallace Group, one of four active poetry-critique groups in Door County, was conceived as a way for poets of all skill levels to write, critique, collaborate and engage. The group’s name evolved naturally because the group used a Robert Wallace book of prompts to inspire a new piece for each meeting.

Another critique group, Unabridged, meets monthly at Write On, Door County, focusing on collaboration through recommendations.

“We share our work with others for support and suggestions for how to better craft what we are working on,” said Sturgeon Bay poet Mike Orlock. “Each of us usually brings two pieces for consideration. We share copies, read the work and discuss what seems to work and what doesn’t. It is a very positive environment, and the ‘criticism’ is more in the vein of recommendations for how something can be better stated or arranged.”

Most of the groups share this atmosphere of positivity. For example, another poetry group, Belles Lettres — whose name means “works of beautiful literature” — focuses on simply creating space for poets to bring anything they’re working on.

Estella Lauter, Door County’s poet laureate in 2013 – 15, helped to found Belles Lettres because she and others saw the need for an expanding community of poets. Lauter was prodded by poets who wanted a group but didn’t fit into the existing groups.

Belles Lettres and the Wallace Group — in addition to the Word Women and Unabridged groups — are evidence that poetry is thriving in Door County, and especially in Northern Door.

It’s easy to mischaracterize or underestimate the artistic exchange that occurs when writing poetry, which has long been thought of as a solitary exercise. The expression involved is not only for a poet sitting alone at a desk, or for a single performer on stage at a poetry reading.

“What was important for [Belles Lettres] was to be able to write what was on their minds and then get the feedback from the rest of the group,” Lauter said. “That group has been a support group for the people involved. Poetry groups don’t always tend to do that, but this group has worked that way. The poems in some ways have tended to go deeper because they’ve tended to be about these really difficult life issues.”

A meeting might include catching up, then an exchange of drafts and discussion. A group member may share a poem he or she wrote years ago, or just that morning. The poet may read it aloud, or the group may read it silently, and then the group members offer praise and critiques, with the exchange of ideas and feedback creating a circular, collaborative, artistic moment.

“Poetry groups — or any writing group — are useful tools for getting a sense of what a piece can be,” Orlock explained. “It is sort of like rehearsals for a performance. Trying out a poem with people who are engaged in writing poems, too, is much better than asking someone cold what they think of a particular piece. I’ve done that before. Usually the response I get is, ‘Good’ or ‘Nice.’ Someone who is also struggling with the same kinds of issues is generally able to offer more varied and specific feedback that I can use to make the poem as polished as I can get it.”

Rafal has a slightly different take on the process.

“I think it pretty much slaps you in the face to be real with things,” Rafal said with a smile. “And you may have a darling line that you just think is the cat’s pajamas, but your critique group can help you very much see that that darling needs to go — and sometimes what it needs to be replaced with.”

Santek credits part of that poetic energy to a peninsula he calls “an artists’ community.”

“There’s something special and magical about Door County that’s hard to identify, but there’s something in the air here that gives people that freedom of self-expression,” he said.

Wander into Starboard Brewing in Sturgeon Bay on the first Tuesday of the month, and you’ll find Bards and Brews, a gathering place for writers to share their poetry over a pint. Turn up at the Unitarian Universalist congregation in Ephraim on the second Wednesday of the month, and you’ll witness the Dickinson Poetry Series, an event during which a featured poet shares work, followed by an open mic. Make your way up to Newport State Park, and you’ll discover a poetry trail winding through the woods and into a meadow, with verse posted along the way.

The landscape and draw of Door County continue to pull artists to the area, and then off the beaten path to find creative, inspirational places.

“I do think that it’s the combination of the arts and the incredible beauty of the natural world,” Lauter said.

The poetry community is growing in spirit and energy. Rafal once heard someone describe Door County as a sort of poem itself, and if that’s true, then the county has a chorus of poets, writing together, to sing its praises.

This woman I call mother
has turned to shades of blue
Her hands echo blue splinter patterns
frosted windowpanes on dead winter morns
She has kept her heart locked in a heavy metallic chest
letting it breathe only on rare awkward occasions
I long to know what secrets she hoards in that box so
well guarded by jungle cats and swamp lizards
What unrealized hope, awful tears, unbirthed joys
now musty and shriveled
Regrets feeding on her unled life