The Northern Door Peninsula has found fame for sunset harbors, fish boils and goats on a restaurant roof. However, few tourists or locals recognize the importance of the U. S. Department of Agriculture Agricultural Research Station (USDA/ARS) that they pass on Highway 42 north of Sturgeon Bay.

While research on a variety of fruits, vegetables, small grains, and ornamentals is conducted on this site, perhaps the most impressive work involves the U.S. Potato Genebank that is maintained and available to horticulturalists not only in this country, but throughout the world. 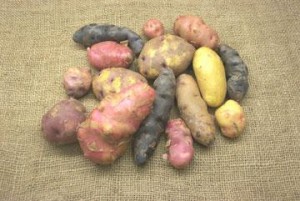 An assortment of spuds from the Peninsular Agricultural Research Station.

Dr. John Bamberg is project leader of the Potato Genebank, a cooperative project between the USDA/ARS and all 50 states along with support from the University of Wisconsin-Madison. This operation is now in its 53rd year.

Stored in the bank are 150 different species of exotic and domestic potatoes with 5,000 potato germplasm items available to other researchers. While home gardeners plant pieces of potatoes with “eyes,” the vegetable can be propagated from seeds and vegetative tissue as well, all included among the germplasm at the station.

Some readers may be familiar with Seed Savers, an organization in Iowa dedicated to the preservation of heirloom vegetables. Their mission is to build and maintain an inventory of seeds from old varieties to keep varieties from being lost.

Bamberg explained that the goal of the Potato Genebank is not preservation, but “the genetic improvement of the potato crop in ways that benefit society.” Those improvements include potatoes that are easier to grow, that are more resistant to pests and stress, that make less of an environmental impact as they use less water and fewer pesticides, that offer better nutrition, and ultimately, make money for producers.

“We don’t feel it’s necessary to keep an old named variety,” he said, “unless it has more extreme genetics of known or unknown value.

“Our part is the very foundation level of the process,” Bamberg continued. He likes to use the analogy that the Genebank puts “tools” in “a big toolbox of germplasm that can be used to fix the problems of the potato crop.” Subsequently his organization works “to collect (and import), classify (and document), preserve, evaluate and distribute the raw genetic materials for others to use.”

One of the problems potato growers presently face is a blight that is troubling growers in Wisconsin as well as producers in other states, recalling the potato blight that caused the historic famine in Ireland. 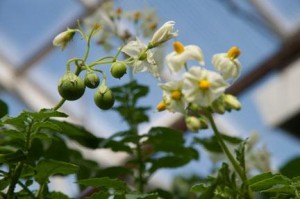 Blights can be controlled in two different ways. Traditionally the disease is treated with chemicals, a process that causes environmental concerns. As blights eventually develop a resistance to a particular chemical, a different one must then be used.

A second approach to disease involves the work of the Genebank.

The potato is a new world vegetable, contrary to the popular conception that potatoes originated in Ireland. The birthplace of the potato is actually the Andes, probably either Peru or Bolivia.

Field research takes scientists to the Southwest in this country, and to Central and South America, to study wild potatoes, which resemble their domestic cousins, except that the tubers are smaller and more numerous and the vegetation varies considerably.

One development that will help to control potato blights was the discovery of the RB gene that provides blight resistance. The gene was one found in “a very weedy wild Mexican species collected in the genebank many years ago,” Bamberg said.

A second goal of researchers is to reduce the environmental impact of growing potatoes. A reduction of dependence on chemical treatments for disease is one objective as is the development of drought resistant species. In addition, potatoes can be bred to tolerate various environmental stresses, such as extremes in temperature or the presence of salt, without the appearance of defects in the tubers such as bruise, hollow heart and sugar end.

Nutritional improvements are also a research goal. “We are beginning to work on the potassium potential of germplasm in the Genebank,” Bamberg said. “Similarly we are characterizing a potent anti-cancer compound almost unique to potatoes with colleagues at the medical school in Madison.” 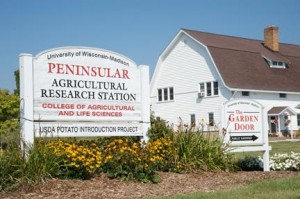 Bamberg pointed out that while blueberries, for example, are rich in antioxidants, the relatively low cost of potatoes and their large role in the American diet make them an effective source of nutrients.

A final goal is to make more money for producers. “It has been estimated that about 50 percent of the four-fold advance in potato yields in the 20th century has been due to genetic improvements,” Bamberg said, “and about 1 percent of annual value of all crops may be credited to exotic germplasm, around $10 – 25 million per year for potatoes in the USA.”

A current research project at the station that could potentially benefit producers involves experiments to find genetic markers for the high calcium content that leads to better storage of the tubers.

The Potato Genebank in some respects is like a financial bank. Just as those institutions don’t simply squirrel money away in vaults, neither does the Genebank with germplasm. Not only are the seeds, tubers, and plant tissue used to make investments throughout the world, but the germplasm is managed to keep it healthy. Dependent upon the germination rate of various potato species, priorities are established as potato plants are chosen to be grown in greenhouses and the seed collected to maintain a viable genebank.

Potato plants in bloom, while not as showy as chrysanthemums or geraniums, nonetheless provide a beautiful display in the station greenhouses. And while they might not replace harbor sunsets, fish boils, or goats on a roof as subjects for postcards, they are still a mighty fine sight. Just ask the Irish.

For further reading see “Common’Tater Interview with Dr. John Bamberg” by Tamas Houlihan in the August 6, 2006 issue of The Badger Common’tater.