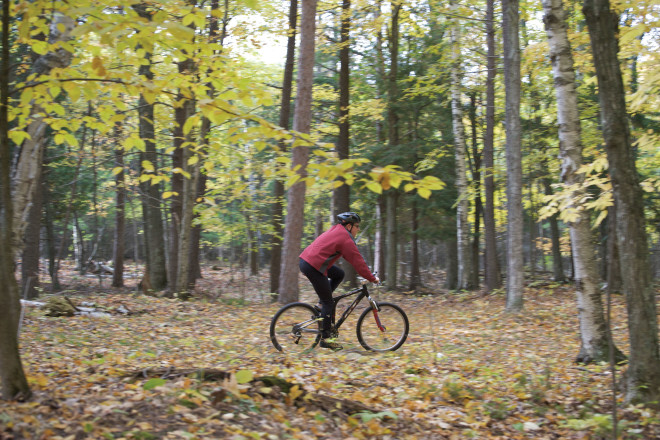 Few Door County visitors have missed a spin through famed Peninsula State Park to climb the tower, take in a show at American Folklore Theatre, or just meander along the roads. But if you’ve never been to Potawatomi State Park, located along the southern shoreline of Sturgeon Bay, you’re missing out on one of the county’s most beautiful spots. 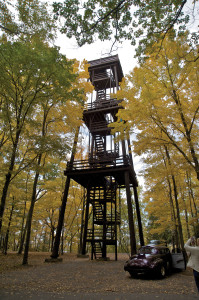 Europeans first settled it. The 1,200-acre sanctuary boasts some of the best biking, fishing, hiking, and kayaking in the county. During the summer, the park sees heavy use from campers from all over the Midwest who know that Potawatomi is less congested and just as stunning as her park sisters throughout the county. But in the fall, the beauty of Potawatomi is unrivaled, and visitors often feel as if they have the park to themselves.

Potawatomi has something for every type of outdoor enthusiast:  trails which meander along the rocky shoreline of Sturgeon Bay, historic stone shelters, scenic waterside picnic areas, and playgrounds. The park also has a 75-foot observation tower – identical to the one at Peninsula – with an equally compelling view of the shoreline, farmland, and islands of the Door.

The Wisconsin State Legislature named 2010 “The Year of the Escarpment” to call attention to the unique geographic formation which gives Door County its soaring cliffs and rocky bluffs. Pot Park, as it is affectionately known by locals, is a wonderful spot to hike and enjoy the vistas made possible by the elevations of the Niagara Escarpment. Many Sturgeon Bay residents enjoy the park on a regular basis and make it their place for after-work recreation. “Potawatomi is like a backyard neighborhood park for people in Sturgeon Bay. People hiking, running and skiing here know each other,” says Margaret Carroll, who lives within minutes of the park and hikes and skis there regularly. “As a woman, I feel safe going there alone…it’s an extension of the community,” she adds.

The soaring popularity of silent sports, such as kayaking and hiking, have also brought more visitors to Potawatomi. This past summer, the camp store at the park came under the stewardship of Todd and Becky Hirthe, who rent bikes, kayaks and canoes to visitors. “People just love it here,” says Becky. “Kayakers can see swans, geese, ducks, pelicans and bald eagles.” And, at a mere $25 for a half-day kayak rental, the Hirthes are seein

g many families taking advantage of the affordability of vacationing at state parks.

Campers will find many options at Potawatomi. In addition to individual campsites nestled in the woods and along the escarpment, the park recently constructed two spacious group campsites ideal for larger events such as family reunions, scouting trips, and weddings. The sites were carefully planned to give visitors plenty of shade from new and existing trees, as well as maintaining open space. The wells, pit toilets, and drinking fountains are all solar powered. In 2009, they were utilized for a total of 16,000 camper days, and park superintendent Don McKinnon expects even more use this year.

Pot Park’s most unique offering is the “Cabin by the Bay,” a fully-accessible indoor facility for campers with disabilities. The cabin is one of only seven fully-accessible such buildings in the state, and books up early in the season. Potawatomi also has one of the few accessible fishing piers around, and anglers of all ages and abilities have been known to catch a few walleye, bass, or even salmon casting there.

Fishing is good year round at Potawatomi. During the winter, Sawyer Harbor becomes a “little city,” dotted with ice shanties. But, during summer and fall, many fishermen camp at the park and launch their boats, trolling for perch, northern, and walleye. “In the early morning, t 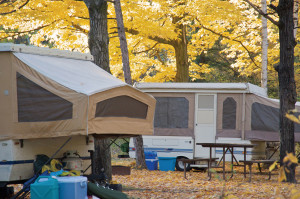 he fish cleaning station is a busy place,” says McKinnon.

Friends of Potawatomi State Park is an avid group of supporters who volunteer for such tasks as invasive species removal and seasonal garden care, as well as raise money to support a park naturalist position and purchase large items like grooming equipment. Their most recent gift to the park was an enormous Texas-sized grill which stands at the park shelter along the shore. Bill Scholten is president of the friends group, and says, “Pot Park is truly a little hidden jewel in Door County and it needs personal care.” With funding cuts that have compromised the Department of Natural Resource’s ability to staff state parks, the friends group is essential. “Every spring we work to clean up all 123 campsites at the park,” says Scholten. “We’re a small, but very diverse group, and we get a lot done.”

For 15 years, the friends group has held Run Wild, a 3-mile/10K run/walk event which takes place the first Saturday of October. Local folks gather to run the roads of the park and support the mission of the friends. The event is a festive day, which last year drew about 350 registered athletes. There’s even a Smokey Bear Children’s Fun Run for kids ages four to 10.

Hikers at Potawatomi will find a variety of trails ranging from the interpreted Ancient Shorelines Trail (one-half mile) to the Tower Trail which features steps and steep drop-offs close to the water (3.6 miles). The park also sees some hard-core hikers, as it’s the Eastern Terminus of the Ice Age Trail, a 1,000-mile trek that meanders through Wisconsin and the Upper Midwest.

If you prefer locomotion that’s speedier than hiking, but still “silent,” never fear. Plenty of rollerbladers, cyclists, and even “rollerskiers” call Pot Park home throughout the fair seasons. Bikers can keep to the paved roads, or venture onto the off-road trails that wind through the woods and fields. And, when old man winter arrives, the park is a haven for cross-country skiers (stride and skate), snowshoers, and snowmobilers. A group of dedicated volunteers grooms the trails, which many folks consider the best in the county.

This fall, Pot Park will host a new activity:  its first ever nine-day gun deer hunt during the regular deer season in November. According to Don McKinnon, the park initiated a reconnaissance study and discovered that “within 50 years, there will be no forest left” unless the deer population is controlled. McKinnon concedes that there were a few folks displeased with the decision, but that most parkgoers understand the pragmatics of forestation. “I’ve seen herds of 30 and 40 deer in the park – just look at that browsing line,” says McKinnon as he points to the forest’s edge.

Activities abound at Potawatomi, but don’t neglect what many find to be the most breathtaking spot at the park:  the grassy picnic area atop what used to be a downhill ski trail. The chairlift has long since stopped operating, and the chalet at the foot of the steep incline was recently torn down, but the vista on any day is breathtaking:  ponds, fields, forest, and the sparkling waters of Green Bay.  Bring your picnic blanket, bring the kids, or just go by yourself and enjoy the quiet jewel of Door County’s State Parks.