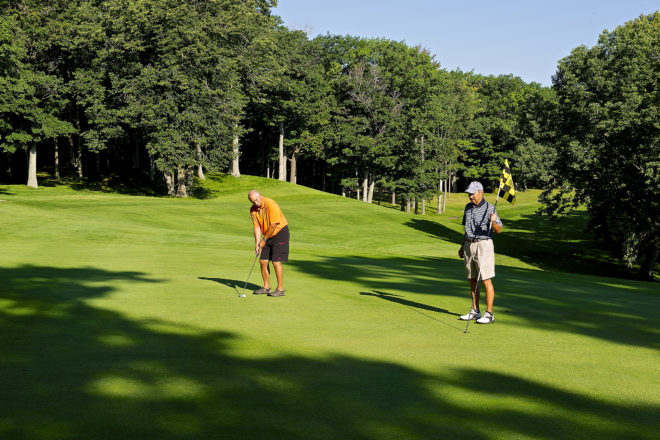 Golf is supposed to be relaxing, right? Being outside and enjoying the beauty Door County provides is very soothing. However, there comes a time when a hole just has your number. No matter how many times you play it you feel deflated and wonder why you play this game. Throughout the season the Peninsula Pulse will spotlight some of the toughest holes in Door County.

No. 12 at Peninsula State Park tends to ring a bell, literally, on the topic of the toughest holes Door County has to offer.

Known for its iconic bell, placed 240 yards into the fairway, out of the golfers’ view from the tee. A ringing bell is a sign from the group ahead that they are out of driving range. Then the fun begins.

The dogleg left par four — measuring 392 yards from its furthest tee — is never difficult due to its distance. The key to parring this hole is about control, the entire trip from tee box to green.

The climbing tee shot must stay centered with a forest of maple, pine and oak trees lining each side of the fairway. Any wavering from the beaten path will leave a golfer with beaten slacks and beaten dignity.

From the fairway, No. 12 seems to ease up. The short grass slopes to the green and invites golfers inward. It’s a welcoming sight after splitting the tree lines, but these open arms can be deceiving.

It was mean enough to ruin John Parent’s chance at winning the Resorter’s Match Play Junior Division back in 2005. Though the details aren’t exact in his memory, the thought of No. 12 spikes the notion of a tournament that got away from him.

“I think I had a double bogey on that hole, and it kind of choked me,” said Parent. “I think I hit the ball too far after the dogleg, took two shots to get out, had to chip on and two putt for a six.”

No.12 at Peninsula State Park shows golfers that it doesn’t take a bunch of hazards to loom as one of Door County’s toughest. It’s simple, it’s robust, but it’s also unkind. It’s the final leg of what some golfers consider the toughest stretch of holes in the county.

“Golfers do mention that if they can get through 10, 11 and 12 at even par, things are looking good for the rest of the round,” Jason Daubner, PGA general manager at Peninsula, said. This means progress, simply by surviving a three-hole stretch.