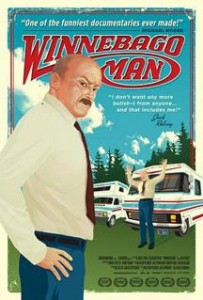 The Green Door Film Society will screen Winnebago Man at the Greens N Grain Deli in Egg Harbor on Thursday, Dec. 16. The entertaining documentary explores the phenomenon of Jack Rebney, who became an Internet sensation after a grainy, nearly 20-year-old video of him furiously swearing while filming a Winnebago sales video made the rounds online. The film shows what happens when unwanted fame sweeps someone up into a life of notoriety that they never desired.

Traveling to a mountaintop, filmmaker Ben Steinbauer tracked down Rebney – who became known in underground circles as the “Angriest Man in the World” – and tries to discover what makes this loner tick.

The Green Door Film Society will meet every other week to watch and then discuss film screenings that include unusual films of all kinds, from documentaries to foreign flicks.

Greens N Grains Deli will host a natural and organic dinner special each evening before the Green Door Film Society meetings available from 6 pm on. There is no charge to attend the screening, though seating is limited to 30 people.

Greens N Grains Natural Foods and Deli is open daily, 10 am – 5 pm, except on Film Society screening nights when they will remain open until 9 pm. The store is located in downtown Egg Harbor at 7821 Highway 42.

For more information call 920.868.9999 or email [email protected]. Notes and discussion questions for each film will be provided in advance online at http://www.Greens-N-Grains.com.