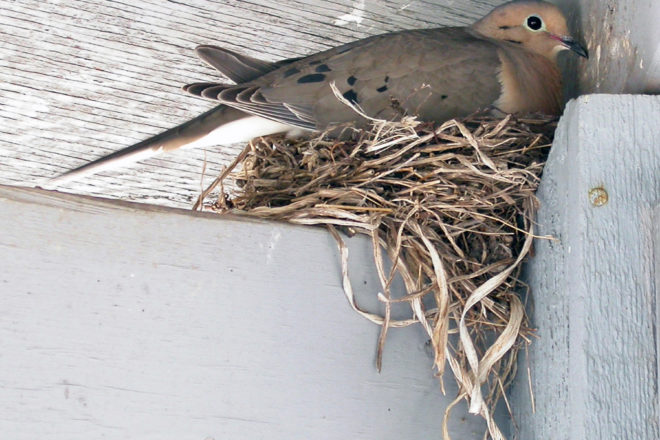 This Mourning Dove made a much thicker nest than usual for the species. Photos by Roy Lukes.

Birds that use mud in constructing their nests, such as the American Robin, Eastern Phoebe, Cliff Swallow, Barn Swallow and Wood Thrush truly struggle during dry spring seasons. In times like these we try to keep a small section of our yard muddy by pouring water into the area so the birds can get the foundations prepared for their nests.

A number of years ago I observed more than 2,000 Cliff Swallow nests constructed on the sides of two barns on a farm near Deerfield, Wisconsin. This was considered the largest colony of its kind in the world. The farmer nailed, horizontally, many long two-by-fours onto the sides of his buildings. In addition to this, he aided the birds by forming huge mud puddles in his yard. Surely he had little to no problems with insects. 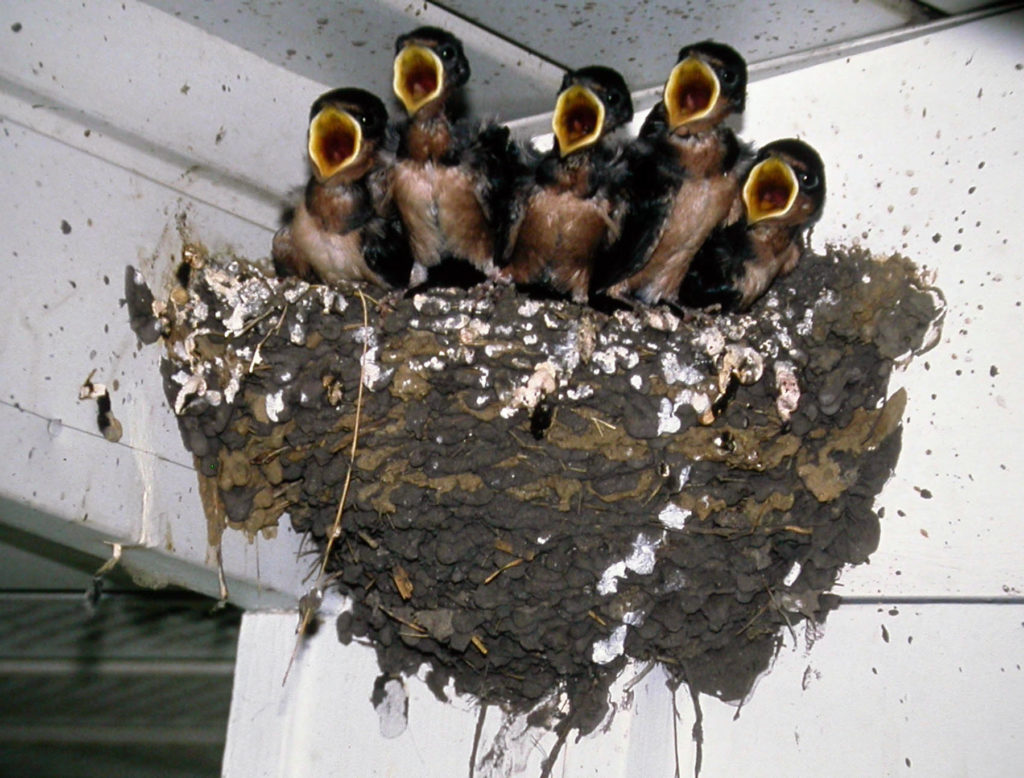 Cliff Swallows, having buffy forehead and rump patches, build jug or gourd-shaped mud nests with side entrances. They are often placed under the eaves or roof overhangs of buildings. The birds are not the least bit fussy whether the building is a post office, gift shop, bank, tavern or even a large dam. A site near a body of water is often preferred both for its mud along the shore and the abundance of insects. A great place to see many nests is in the Thordarson boathouse on Rock Island.

Barn Swallows are also quite social but because their nest site requirements are more demanding, they rarely nest in large concentrations, as do the Cliff Swallows. The Rough-Winged Swallow is a more solitary breeder, usually in rocky outcroppings like those at Cave Point County Park, while the Tree Swallow, being a cavity nester (a bird that either excavates nesting holes in trees or uses holes vacated by other species), will tolerate fairly close neighbors of its own kind.

I have been asked if nests are used for more than one year. My personal belief is that relatively few of the typical smaller, grassy, cup-shaped nests are capable of withstanding the rigors of winter storms and spring rains to be useable a second year. In one instance a birdwatching group and I observed a Cedar Waxwing pulling apart one of last year’s nests and carrying bits and pieces to its new nesting site. 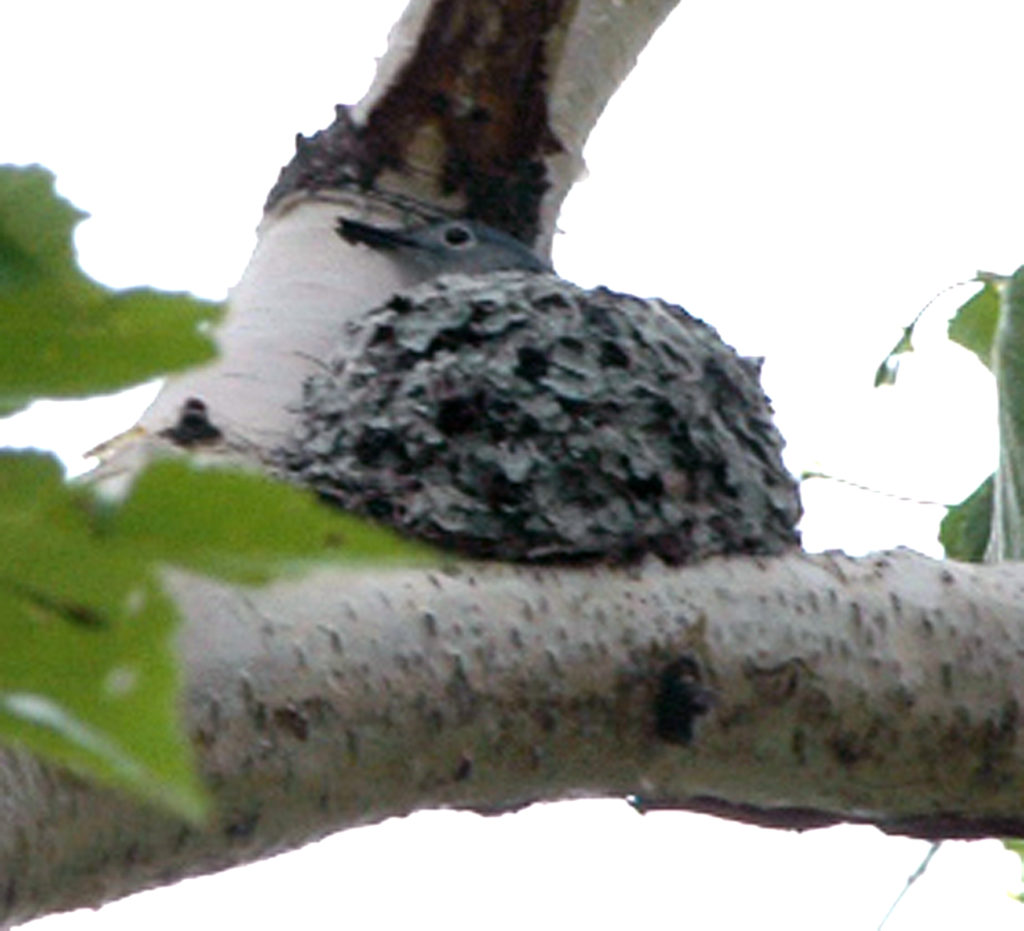 A Blue-gray Gnatcatcher sits in its lichen-covered nest high in a birch tree. Photo by Roy Lukes.

Blue-gray Gnatcatchers, which make one of the most beautiful nests I know of, are also known to recycle old nests, perhaps because the nesting materials they require are not easy to obtain. We have seen a carefully made nest high in a paper birch along the east shore in Baileys Harbor one year. Another nest site was at the north end of Europe Lake in a wetland safe from predators.

Many tree cavity nests and especially larger stick nests are used for two or more years. Bald eagles keep adding sticks and branches each year to repair damage over the winter and strengthen the base. In fact, few hawks, falcons or owls build their own nests but rather use another large bird’s nest from the previous year.

Tree Swallows, Crested Flycatchers and Eastern Bluebirds are known to make use of old woodpecker cavities. All these smaller birds need to do is add nesting material to the bottom of the already-made excavation. 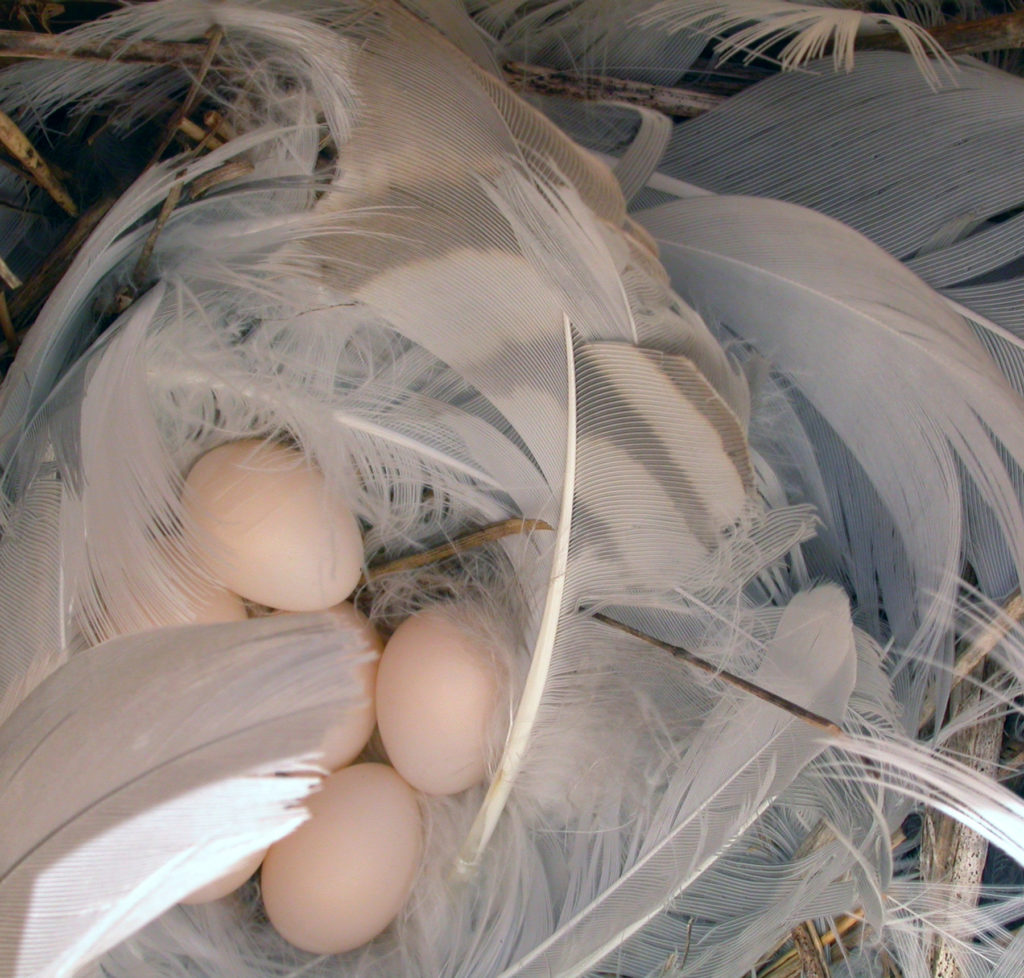 Tree Swallows like to line their cavity nests with discarded feathers from other birds. Photo by Roy Lukes.

A pair of Mourning Doves, obviously a male and female as indicated by their “coziness,” has been perched on an ironwood branch in the front yard all the while I have been writing this story. Talk about a skimpy nest, theirs is! In fact, it is quite possible to look at their nest from below and clearly see the eggs through the loose, small assortment of twigs. How some even remain in the nest I’ll never know.

At the other end of the scale is a cup-shaped nest so firmly and tightly woven, such as that of an American Goldfinch, that heavy rains will sometimes fill the nest and drown the helpless young.

I find it quite wonderful that a bird in its second year of life, having never built a nest, can do so with absolutely no lessons or instructions from its parents. Charlotte and I still chuckle about a female robin that built an incredibly messy nest on the front porch of the Baileys Harbor Range Light residence where we used to live. One of our friends, upon seeing the unsightly nest, commented, “That surely must be a robin newlywed!”

Few summer birds have provided us with as much pleasure in recent years as the pair of Eastern Phoebes that nested on a wooden shelf I nailed to the north side of our house. Apparently these birds are fussy over their choice of nesting sites because invariably they choose a ledge beneath a considerable overhang, such as an old bridge, offering them good protection from the elements. In our case the roof overhang measures two feet.

For quite a few years it was thought that the American Redstart, Ovenbird and Red-eyed Vireo were the three most abundant bird species in the deciduous forests of eastern North America, totaling in the millions of individual birds. By 1965 the Red-eyed Vireo population was already beginning to crash and since then their population has been steadily decreasing.

Their pendulous nest is skillfully constructed from dried grass, fibers from vines and other plants, pieces of paper, mosses, lichens, leaves and even bits of fibers from paper wasp nests. Fine plant materials, white pine needles and even hair line this exquisite masterpiece.

One year, while on a field trip with a class of elementary students, we stopped along a road next to a quarter horse ranch. Someone discovered a Baltimore Oriole nest hanging on a tree branch and it appeared to be made entirely from the mane and tail hair of the quarter horses. It was a thing of beauty! 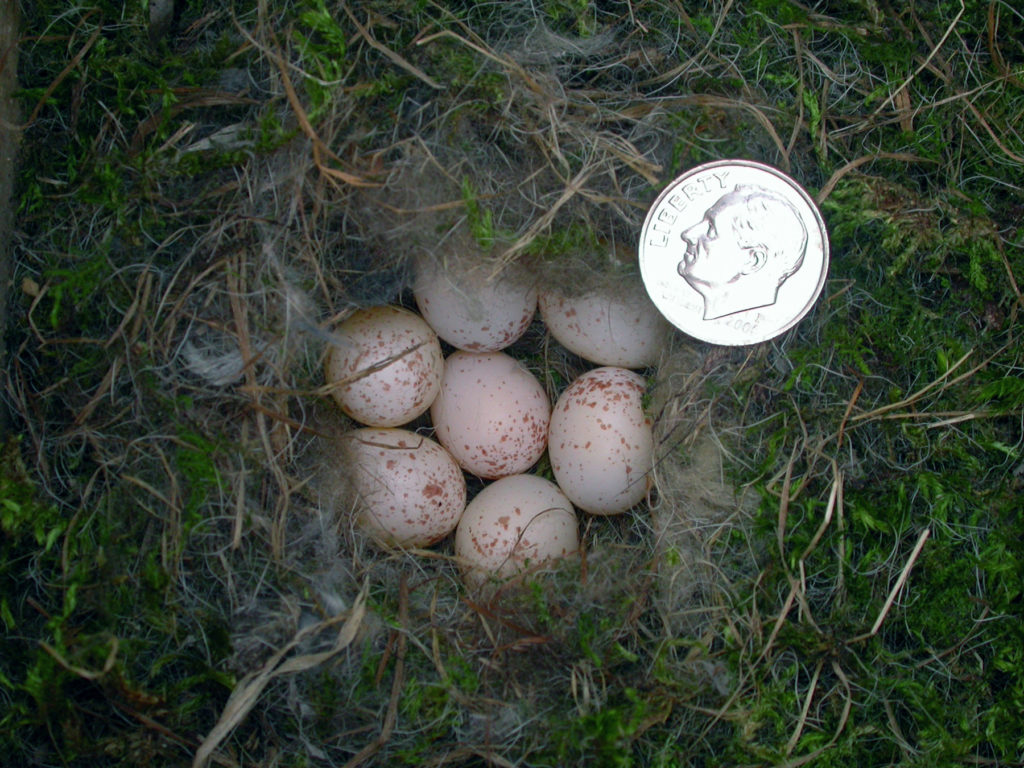 A chickadee lines its nest cavity with a thick layer of moss and then adds fine grasses and sometimes animal fur. Photo by Roy Lukes.

Birds will nest on the ground, in shrubs, in tree branches, in tree cavities or on shelf-like structures. Each species has its preference. We have a bluebird trail of nest boxes placed along roads within three miles of our home. Eastern Bluebirds, Tree Swallows, House Wrens and Black-capped Chickadees have all used our boxes. You can build nest boxes for other species such as flickers, kestrels, screech owls and Crested Flycatchers. If you own woods, don’t clean it up when trees die. Many birds, including woodpeckers, nuthatches and chickadees, will use cavities in standing dead trees.

A wonderful book to read is Margaret M. Nice’s The Watcher at the Nest:  A Classic Personal Study of Bird Territory and Mating. Make every effort to leave as much of your land as possible in its natural state including underbrush, weedy areas, thickets and wet areas. Forget about large expanses of lawn. Put up nest boxes and encourage the birds to live and thrive in your natural landscaped property. You will be rewarded with bird songs and knowing you are helping our native avian population.