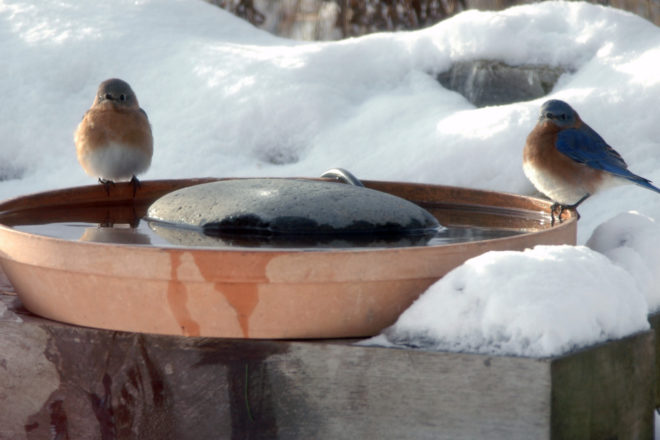 Eastern bluebirds normally fly south by late fall so it is unusual to see a pair at a heated birdbath in January. Photos by Roy Lukes.

Anyone with even an ounce of compassion for wild creatures can’t help but appreciate warm homes while watching the birds brave wind chill factors of 50 degrees Fahrenheit or more below zero.

We watch a bird, like a blue jay, perched on the wooden platform feeder secure a bountiful niche where it can find plenty of seeds. Then quite gradually it hunkers down and fluffs its feathers outward, thereby trapping a lot of air in tiny “down pockets” next to its body. Even the bird’s feet are well covered against the icy blasts.

Herbert Biebach, a German zoologist working at the Max Planck Institute for Behavioral Physiology, did some fascinating experiments with European blackbirds. These birds very closely resemble the American robin in size, body shape and mannerisms. Biebach was interested to learn how they were capable of surviving temperatures down to 22 degrees Fahrenheit below zero.

He devised a cold chamber equipped with windows through which he could photograph and in which the temperature could be closely regulated. The colder the air became, the more the birds fluffed up their feathers until finally they resembled a little puffy ball with both their head and feet neatly tucked under feathers for added warmth. Biebach also discovered the birds’ body temperature was reduced during nighttime hours in order to conserve energy.

When we observe birds that weigh considerably less than one ounce brace frigid weather and wind chill conditions down to 90 degrees Fahrenheit below zero, it becomes quite apparent they are hardier than we think. In fact it has been determined birds in winter will perish more frequently from starvation than from freezing to death.

One winter when it was genuinely cold with a stinging wind sweeping over the snow, we marveled at how the woodpeckers gripped the trees tenaciously in the lee of the wind and how all the birds would hunker down as they perched on the platform feeder. Visual inspection led us to believe they were capable of doubling their outward size when they wanted and needed to.

It would seem logical that many birds living year round in northern latitudes would have more feathers in their bodies in winter than in summer. As a matter of fact Joel Carl Welty, in his excellent book, The Life of Birds, says a Carolina chickadee taken on Feb. 19 had 1,704 contour feathers while one taken on June 4 had only 1,140. 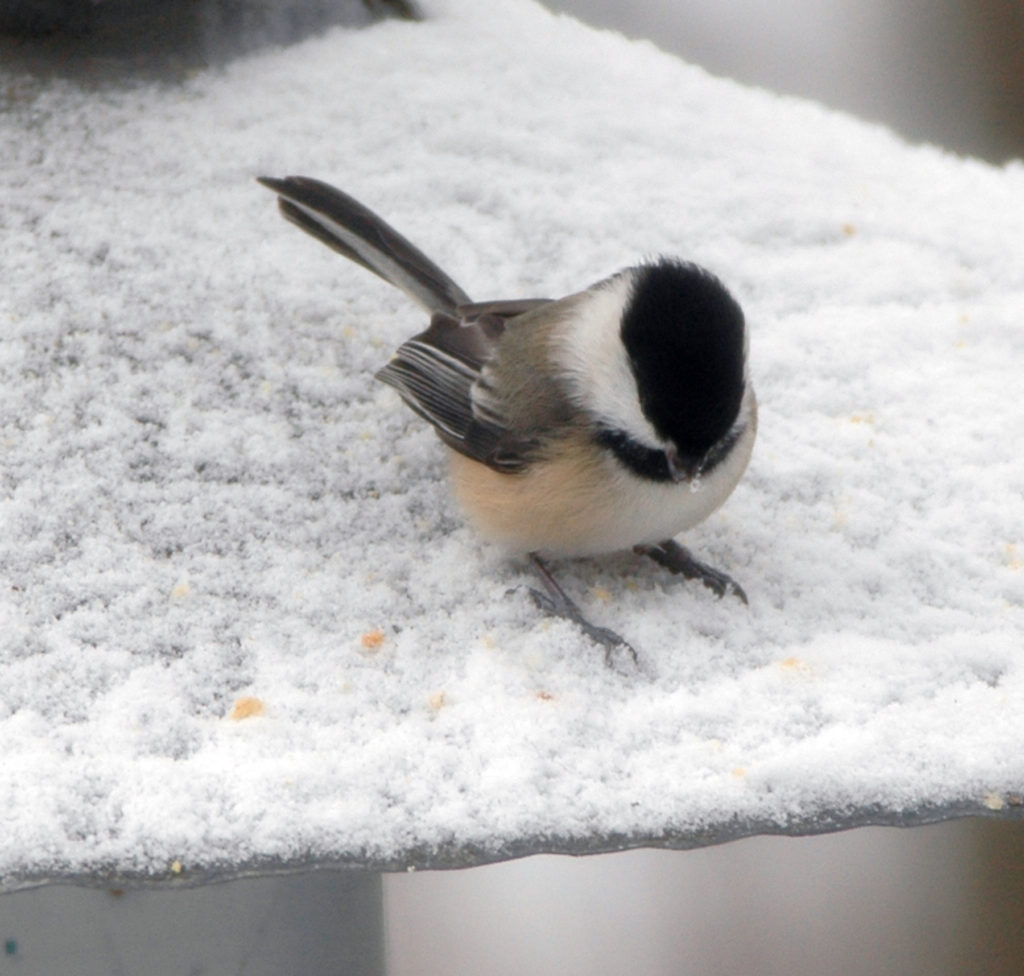 A black-capped chickadee’s heartbeat is nearly 1,000 beats per minute while active on a cold winter day. 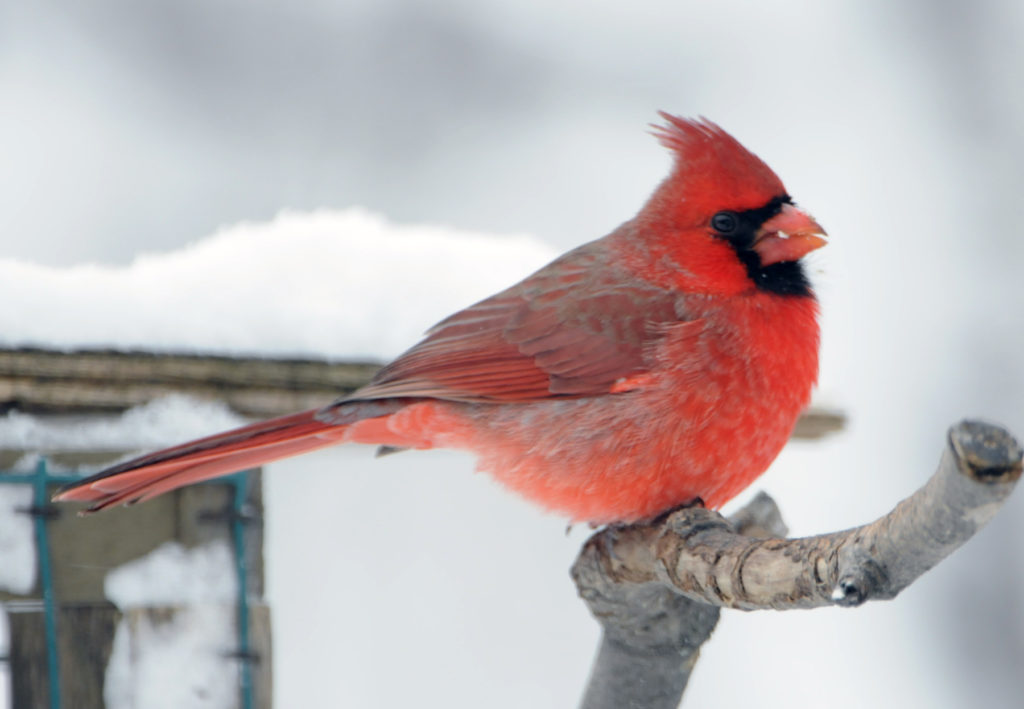 This male cardinal fluffed up its feathers to keep its legs and feet warm. 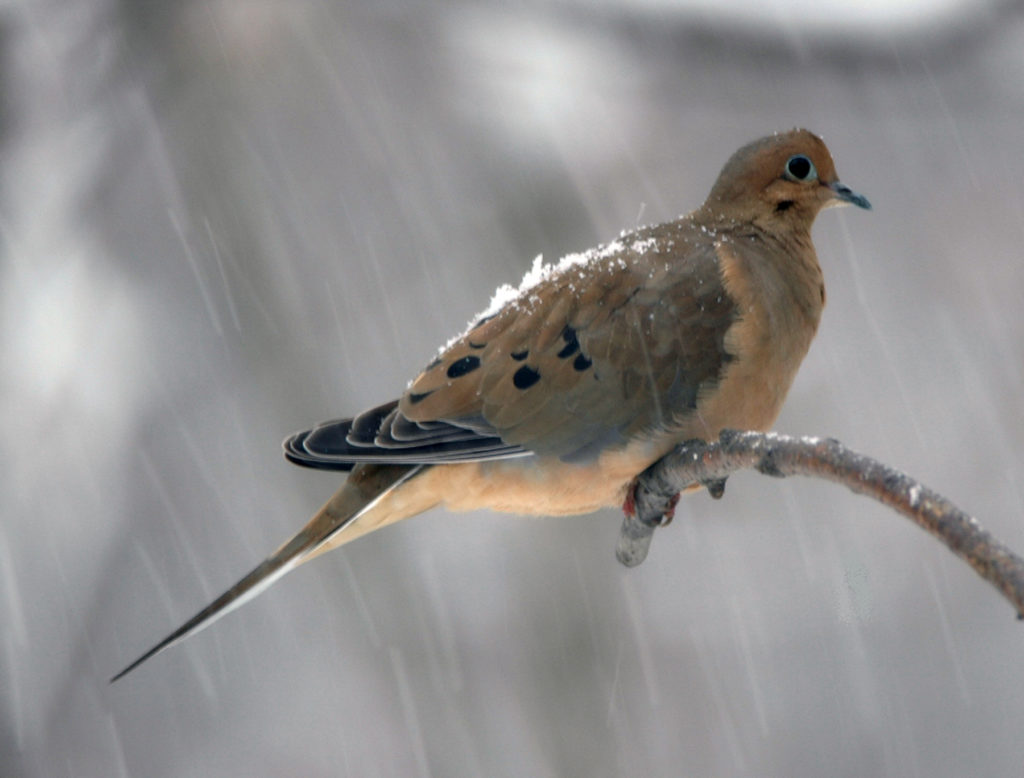 Thick, insulating feathers on this mourning dove prevent the snow from melting on its back. 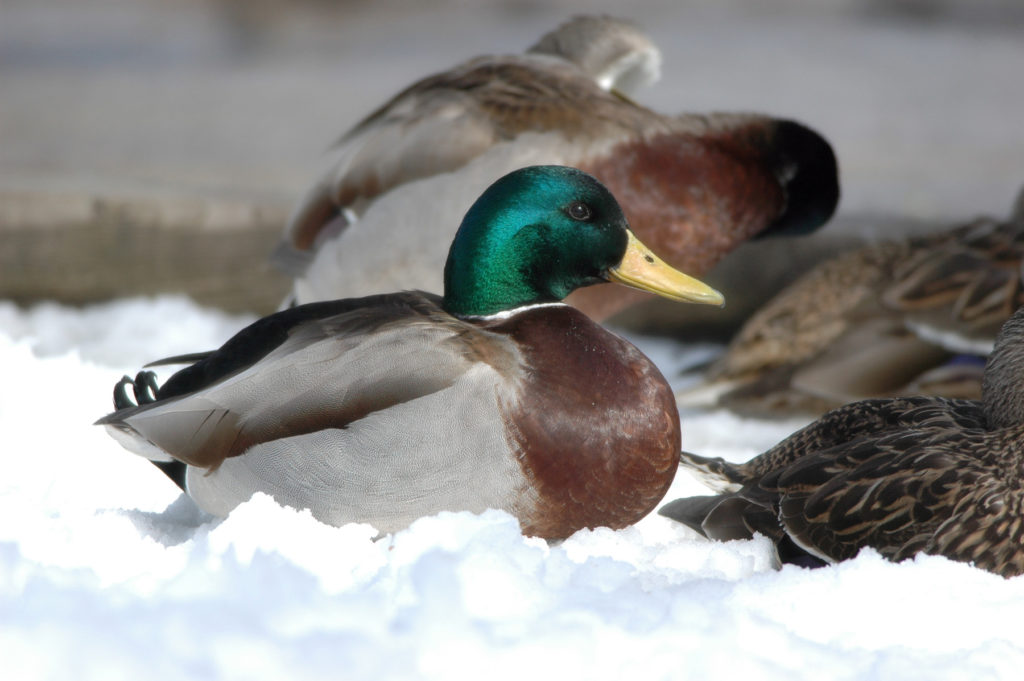 Mallard ducks avoid frozen feet while standing on ice due to the unique way the blood vessels are arranged in them. 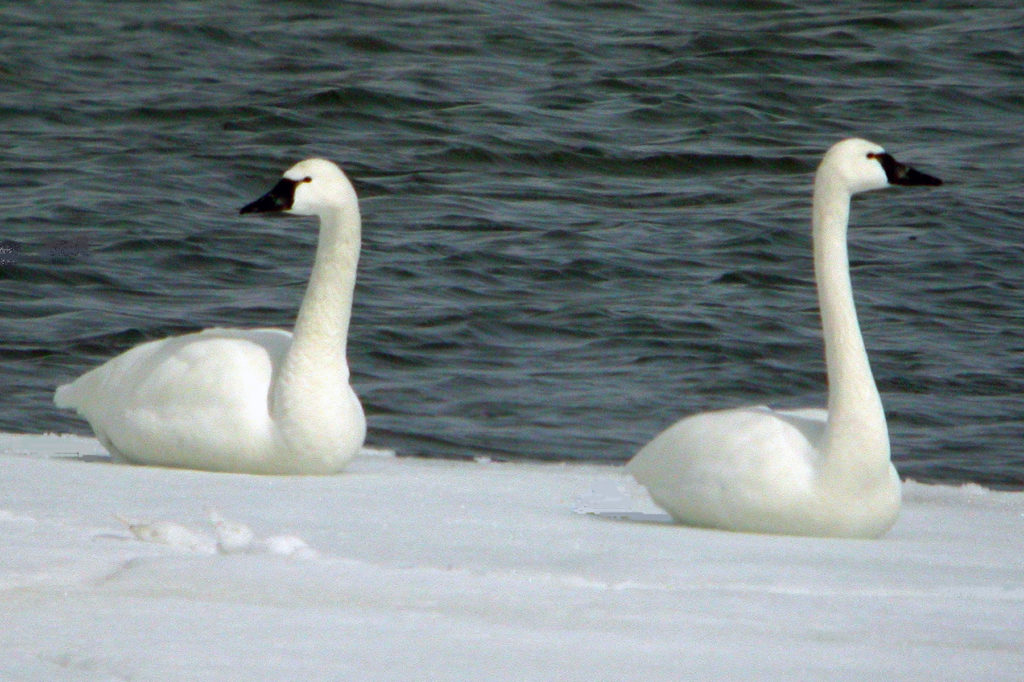 Tundra swans keep their legs and feet protected under a thick layer of feathers as they sit on the ice. 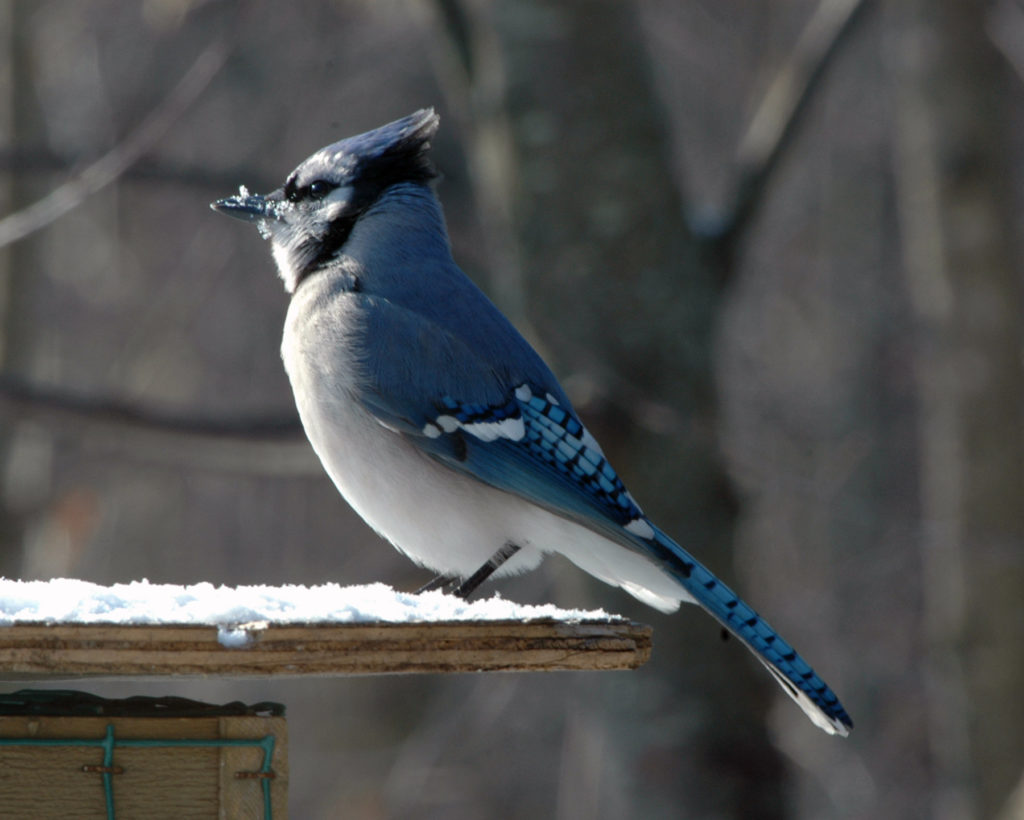 A blue jay survives winter by fluffing up its feathers to trap air and heat. 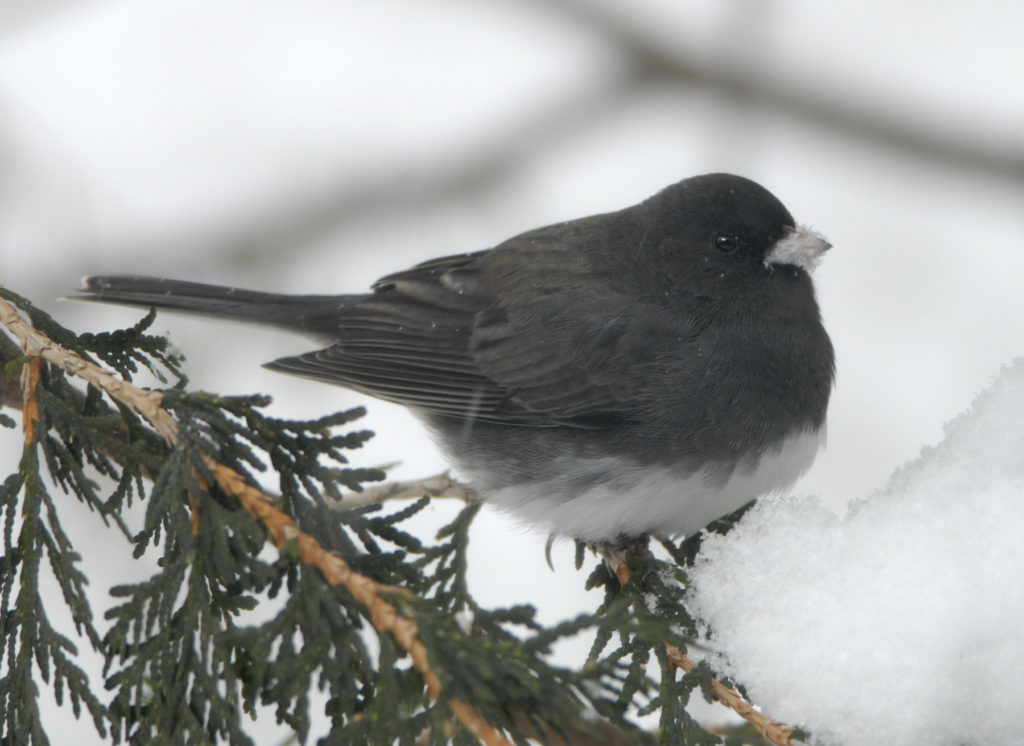 A dark-eyed junco can nearly double its size by expanding feathers so it looks almost like a gray ball. 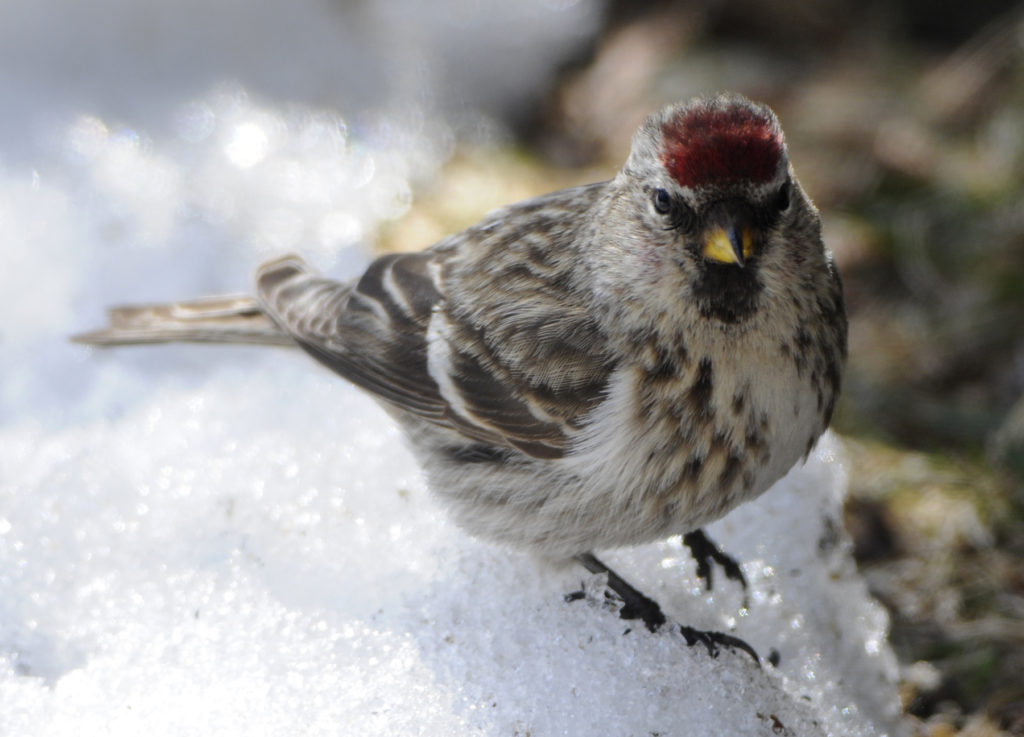 Common redpolls, like this female, will shiver to help them stay warm and retain body heat. 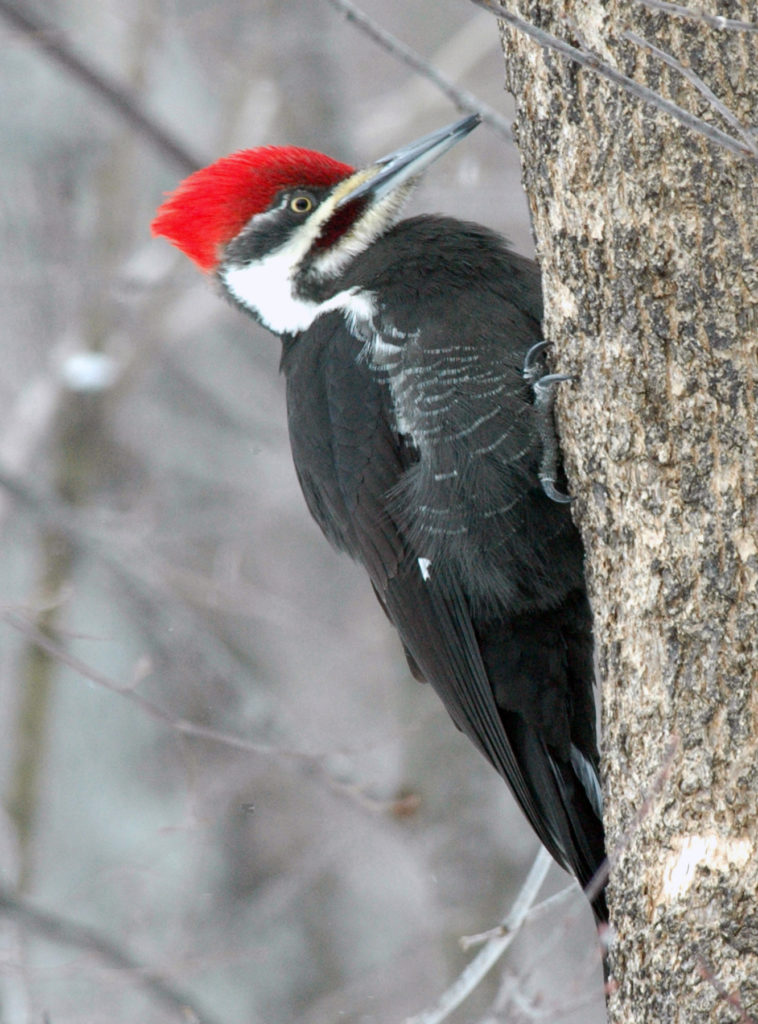 This male pileated woodpecker does not migrate so may grow extra feathers in winter to help him survive cold winter weather.

Undoubtedly birds have evolved over the years to be able to withstand harsh winter environments in more ways than simply growing more feathers. Banding, weighing and measuring nesting chickadees from different latitudes has proven that individuals in the north tend to have larger bodies, giving them less body area in proportion to their weight. This fact helps them to more easily survive the extremely cold temperatures.

Another discovery is that the northern birds’ beaks, legs and wings tend to be shorter than those of their southern cousins. These extremities lose heat more rapidly than the larger parts of their bodies. Birds’ legs and feet lack the extensive capillary system found in humans’ extremities. The birds’ blood vessels in their legs are interconnected by large so-called tubules, which suffuse their legs and feet with a constant movement of warm blood. Furthermore, their legs and toes are composed primarily of tissue that is slow to freeze.

You would think geese, ducks and gulls that stand on the ice for long periods of time would quickly freeze their feet. In order to prevent this, nature has provided that the arteries and veins in their feet and legs lie against each other. Cold, returning blood from their veins is warmed by the arterial blood, thereby bringing about a rapid replacement of heat loss.

Ornithologists have also learned that a chickadee’s heartbeat speeds up as the surrounding air temperature decreases. An active feeding bird on a sub-zero day could be expected to have a heartbeat of more than 1,000 beats per minute, around 17 or more per second! Its heart will slow down to about 500 beats per minute when the bird is asleep.

I’ll never forget handling my first live chickadee I had trapped and was about to band. My first impression was that the entire bird was actually vibrating or shivering at a very high rate when in actuality I was feeling its extremely rapid heartbeat.

Another strategy birds possess in order to survive the cold is shivering. Particularly the small birds, such as pine siskins and American goldfinches, are known to do this. Should you have some of these tiny creatures frequenting window feeders where you can approach them closely, observe them for a while to try to detect their shivering. It has been said that they couldn’t survive in winter unless they shivered.

Even though the ruffed grouse possesses a very thick layer of feathers, this bird is nevertheless considerably dependent upon a fairly deep layer of powdery snow during extended spells of sub-zero weather.

I tended to disbelieve accounts of ruffed grouse diving headfirst at high speed into the soft snow, in other words burying themselves in this insulating “blanket” for the duration of the night, but Charlotte did witness this in our own yard during the winter of 2001.

A movie about grouse that I saw showed one sitting on soft, powdery snow and, in a sense, rapidly shaking or vibrating itself downward into the snow. Within 15 seconds the bird had completely disappeared.

I recall the days at the Baileys Harbor Range Light residence when, on occasion, we could be within several feet of cardinals or evening grosbeaks (we on the inside, they on the outside) as they ate sunflower seeds on sub-zero days. We marveled at seeing their frosted breath and especially the thin rim of frost crystals lining the tiny feathers above their eyes.

Birds during late December at this latitude are experiencing at least 14 to 15 continuous nighttime hours without food. It is especially during these periods of long, cold nights that one wonders how they survive. Add to the long nights a windy day of 20 degrees Fahrenheit below zero and the fact that so many birds can survive is almost miraculous.

Huddling during the night by some species of birds helps them conserve precious heat. Reports have shown a dozen bluebirds huddled together in a birdhouse surviving a night of below-zero temperatures. A Russian study with goldcrests, quite comparable to North American golden-crowned kinglets, showed two huddled reduced heat loss by 23 percent and three huddled lowered it by 37 percent.

Naturally it is the well-fed birds in late afternoon that will survive the best, so be sure to replenish your bird food well before the sun starts to set and your feeder birds will have a greater chance to greet you the next morning!