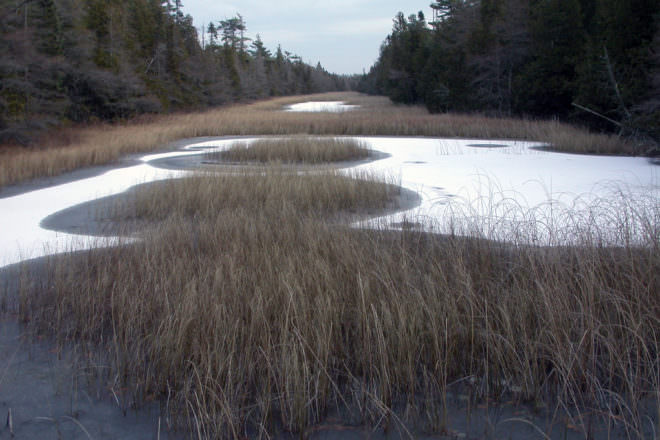 A boreal forest swale in The Ridges Sanctuary rests under winter snow and ice. Photo by Roy Lukes.

One of the great joys in life is being able to explore various plant habitats during the four seasons. I realize there are people who prefer the edges of a cool cedar swamp or the interior of a shady maple-beech-hemlock woodland during the summer, then come winter their one and only joy is basking in the shadow of a southwestern cactus.

Personally, I can’t imagine a more sublime enchantment than being in the middle of an old-growth boreal forest environment during the summer – and during the winter. Summer secrets of the swamps and bogs, protected against most visitors by black mucky ooze and buzzing mosquitos (which we don’t mind either), give in to cross-country skis or snowshoes in winter.

Locate an old rotting stump in February, brush away the snow, and very likely you will discover some amazingly fresh-appearing leafy plants such as wintergreen, bearberry, creeping snowberry or cranberry.

A map of the early vegetation of Wisconsin, based upon the original land survey of the 1850s, indicates relatively few areas in the state have boreal forest habitat. The word boreal means northern. Surely you’ve heard of the Aurora Borealis, the northern lights.

Records indicate that originally there were about 672,300 acres of boreal forest land in pre-settlement times in Wisconsin. They were primarily along the shores of Lake Superior and a small portion of the northeastern section of Door County, stretching from the Baileys Harbor area northeast to North Bay.

Few remaining examples of the original boreal forest exist in Wisconsin today. Nearly all have been cut over, leaving people to experience the boreal climate and related plants in a forest containing mainly second or third growth trees. Frequently all one has left to admire of the original trees are ancient burned-out stumps.

In the Baileys Harbor region, for example, the humid lake breezes keep the summer temperature and rate of evaporation low. It is not uncommon, on an average summer day, for the temperature to be 12 to 15 degrees lower in that boreal forest area along Lake Michigan than in the villages located eight or nine miles to the west along the shores of Green Bay.

In winter, the effect on air temperature is reversed, with shore areas markedly warmer than those of inland areas due to the open body of water, Lake Michigan. The spring season is fickle due to the refrigerating effect of the cold lake water.

The two most important and abundant tree species of the fascinating boreal forest are white spruce and balsam fir. Other fairly common trees include arborvitae, mountain maple, black ash, paper birch, mountain ash, the aspens, balsam poplar and the red and white pines.

Undoubtedly my favorite boreal plants to study and admire during our winter visits to the “secret” places are those of the heath family. Included are Labrador tea, bog laurel, bog Rosemary, leather-leaf, trailing arbutus, winter green, creeping snowberry, bearberry and cranberry.

People find it difficult to believe that the wild cranberry, small and prostrate as it is, is technically a woody shrub. And amazingly, like so many other members of the heath family of plants, you will find its leaves remaining on the thread-size woody stems beneath the snow. Perhaps that is why this exciting group of northern plants appeals to us so much.

Both large and small wild cranberries grow in the boreal forest, including the area in Door County. Each has sparkly, miniature pink flowers in June, and they both have similar but different sized lip-smacking tart berries. It is the large wild cranberry that the commercial growers have perfected through the years.

By the way, the word cranberry is derived from the original name of “crane-berry.” The extremely tiny flower, with its relatively long pointed stigma, somewhat resembles the head and bill of a crane.

Florence Page Jaques, a fine writer and the wife of famous northwoods artist Francis Lee Jaques, said of the boreal forest, “This country never knew a medieval time: it came straight from the primeval into today.”

That’s precisely what we so dearly love about these out-of-the-way, seldom visited niches. We respect them most highly, almost religiously, as though we suddenly found ourselves inside a precious, ornate, sparkling temple not made by hands. The solitude and almost mystical aura, as though one were the first human being to enter this “New World,” prevail there along with cranberries hidden beneath the blanket of snow!