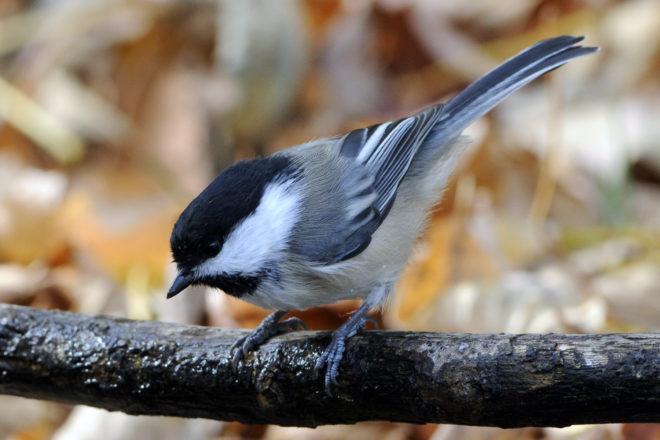 Chickadees are always active searching for insect eggs or any small bit of food. Photos by Roy Lukes.

Few wild creatures that I have studied, observed and photographed during the past 50 years have prompted me to write about them as often as the black-capped chickadee.

These friendly appearing, trusting, beady-eyed, acrobatic spitfires have become favorites of millions of people throughout our country and Canada. The states of Maine and Massachusetts have honored the black-capped chickadee by making it their official state bird.

Of all the birds I banded for the federal government, number 106-74490 gave me the most satisfaction. I banded it in the backyard at the Ridges Sanctuary range light residence in Baileys Harbor on April 4, 1967. I recaptured it in outwardly excellent health in the same place on Oct. 18, 1973.

The fact that it was banded in April means it was hatched during June of 1966 – or thereabouts – or before that year. Simple arithmetic will show that this chickadee was at least seven years and about four months old when recaptured. You’re correct. That was a very old bird, especially for being such a small one. The bigger birds usually live longer. 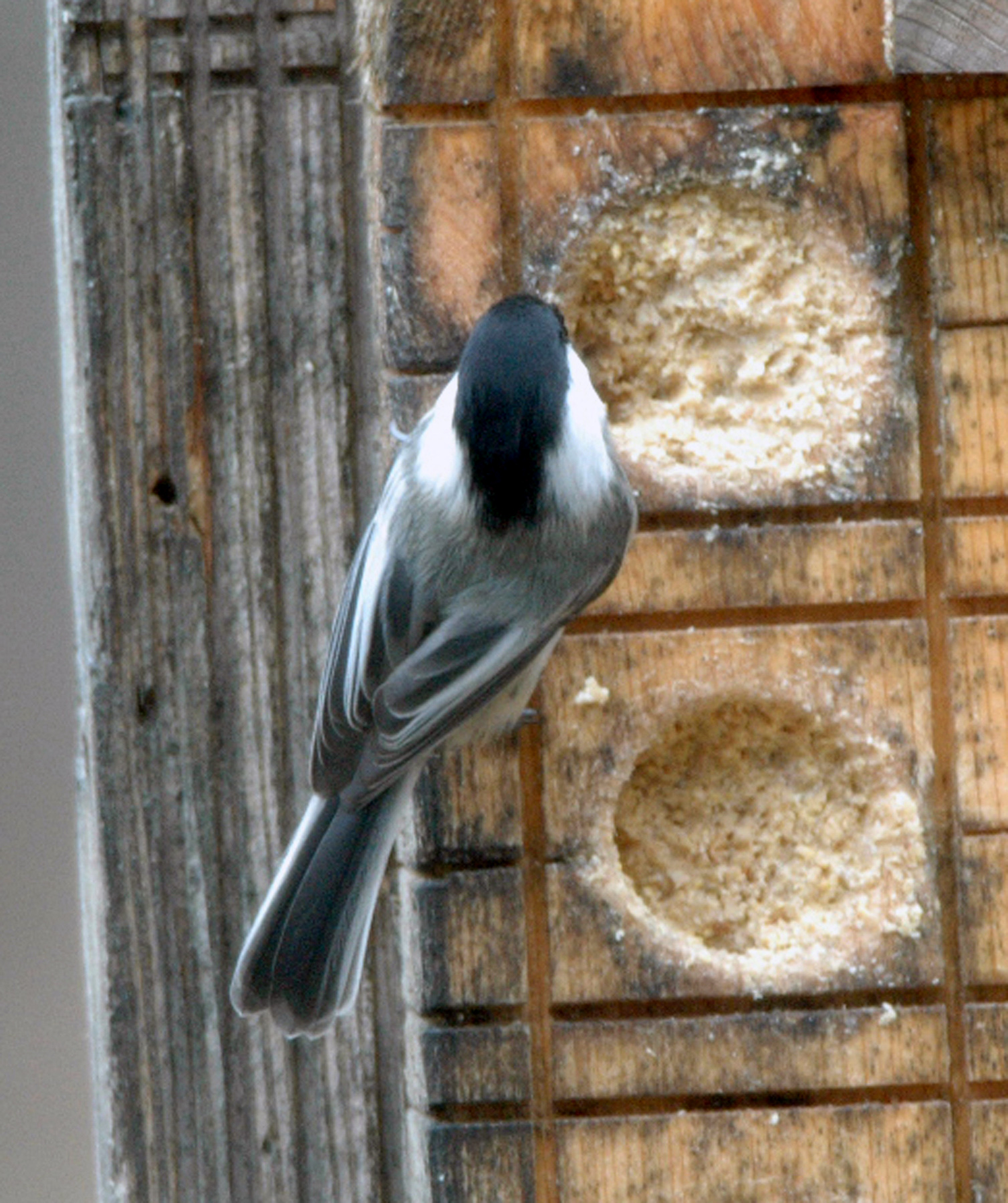 Marvel Meals is one of the favorite foods of chickadees, nuthatches and many woodpeckers.

A study of chickadees has indicated that, in weighing and measuring them, the larger individuals are those found in the most northern parts of their range, while the smaller birds are found farther to the south.

The thought is that smaller birds, having greater body surface area per unit of weight, face increased problems of survival during subzero weather. January is their most critical month in which to live. Very likely the smallest birds of a species are the first to die of exposure to severe weather, such as freezing rain, cold winds or days when the chill factor dips to 50 or more below zero.

Another study also proved that the northern birds have slightly shorter beaks, legs and wings than their southern relatives. These extremities lose heat more rapidly than the larger parts of their bodies.

One experience I remember well occurred as I hiked out to Toft Point one winter day. I hadn’t walked more than a few hundred yards along the old dirt road when two chickadees greeted me from a small spruce tree.

They were about a half-mile from where the chickadees and red-breasted nuthatches usually fed from my hand, so I suspected they were strangers to this area. Without a second hesitation I reached into my coat pocket for a handful of sunflower seeds to hold out for them.

Almost before I had my arm outstretched, one of the birds was fearlessly perched on it looking for a good seed. That chickadee certainly didn’t behave like a stranger.

The nice thing was that it flew up to a branch no more than six feet from me, where it began to “operate” on the seed and allow me to watch its every move. It appeared as though only half of the husk was removed, with the meat remaining in the other half, which formed somewhat of a plate or shallow cup. It picked apart and consumed the rest of the kernel quite easily.

The sunflower seed feeders were empty when I arrived at the Tofts’ Mud Bay house. Here was a good opportunity to feed the birds from my hand, assuming the critters were hungry – and they were. The beef suet in the feeders suddenly became second-best fare as, one after another, the chickadees took turns coming to my hand for seeds.

Now came the surprise. I always enjoy looking for the unusual. Quickly I sensed that one chickadee would get just so close to me but refuse to land on my hand, so I decided to watch his every move. After a minute of his fussing and scolding he flew to the empty metal and glass Koenig feeder, landed on one of the perches and, with loud authority, proceeded to peck at the aluminum sides. 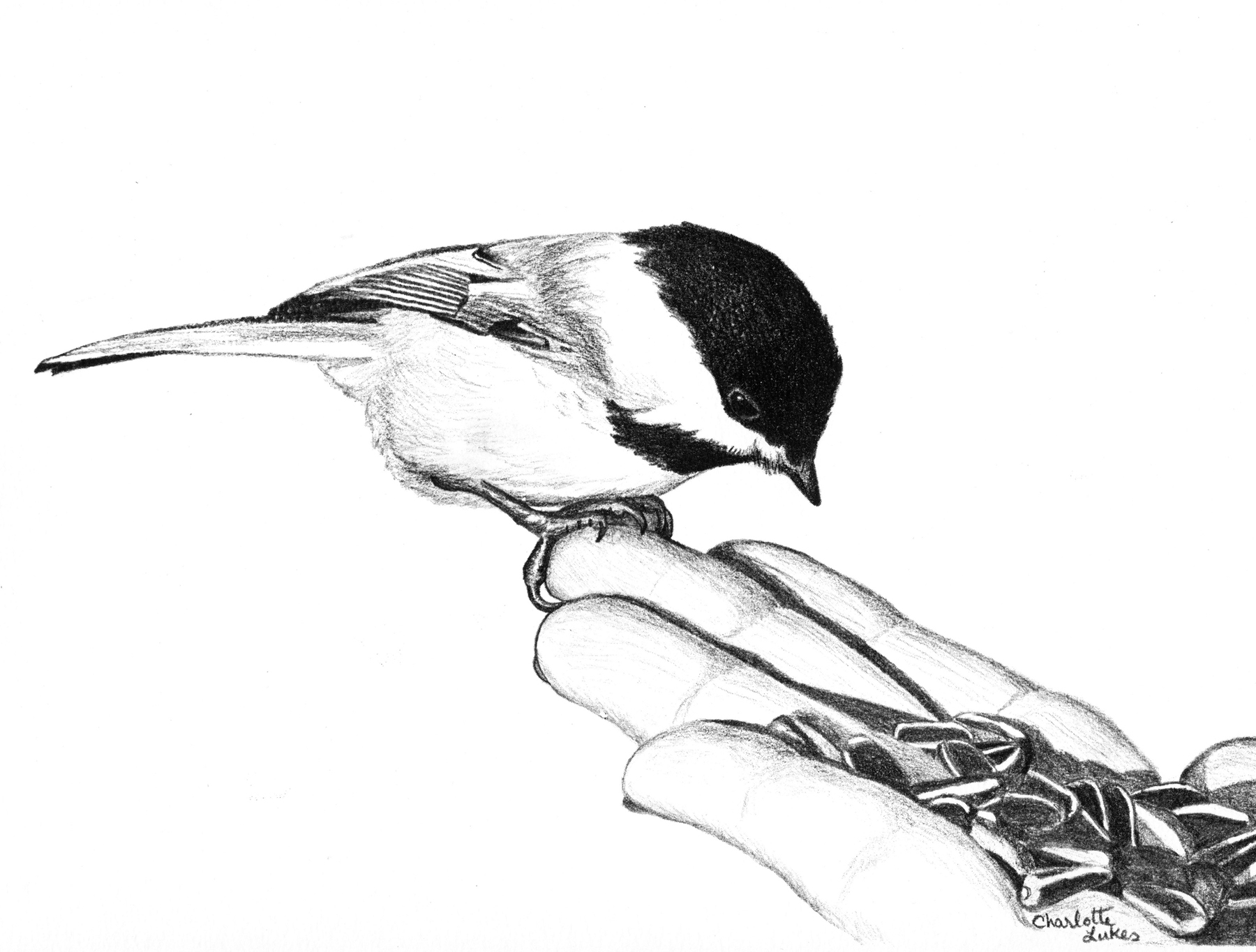 Here is Charlotte’s drawing of a chickadee eating sunflower seeds from a human hand.

Bang-bang, bang-bang, always in a series of two, the bird rapped at one of its sources of food. I was absolutely amazed at how hard that little scamp hit the feeder.

Two things came to my mind. One, he was thoroughly disgusted with my dilly-dallying around and wanted to be fed with his feeder, not from my hand. Or, two, he had learned that his tapping sharply on the feeder would dislodge that very last seed stuck someplace up there on the inside of the feeder. Anyway it was plain to see that he would have nothing to do with humans.

Did you ever lay your eyes on a sad Chickadee? Cheerfulness and friendliness appear to highlight this bird’s temperament.

Hopefully their soft, rather loose and fluffy plumage will keep these black-capped favorites warm this winter when, during one day at the extreme, they will be active for about nine hours and asleep for fifteen. What a feat on a 25-degree below zero night! Keep that in mind this coming January when you either turn up the thermostat or add another chunk of hardwood to the fire.

This boldly marked, amiable little gymnast owns nothing whatsoever, yet rewards us daily with songs and carefree antics. A black-capped chickadee – as wild and untamed as the wind, fearlessly perched on an outstretched hand in search of a sunflower seed – expresses our thoughts and hopes this holiday season.

We hope the joy of discoveries and experiences with wildlife enhances your new year!

Hooray for the chickadees!