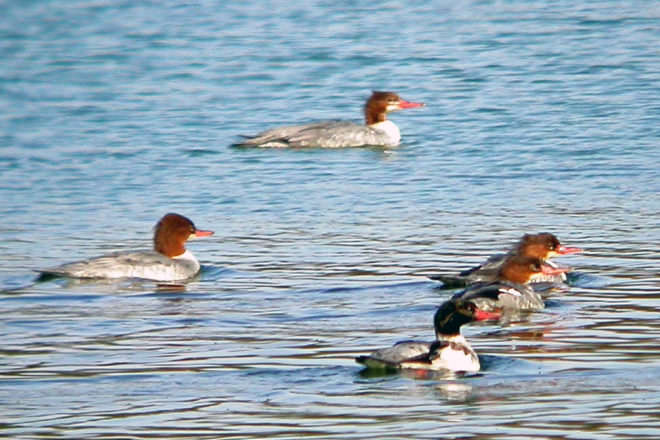 A large duck-like waterfowl that we young boys exploring the Kewaunee River years ago called the fish duck is being seen along the Lake Michigan side of Door County now in large numbers. My tally earlier this month totaled close to 700, with 500-plus seen at North Bay and the rest at Moonlight Bay. Interestingly, the majority of those at the latter site were drakes.

This number may appear large until you read of some of the sightings of these flashy birds during the early winter of the mid-1950s along the Lake Michigan shore between Milwaukee and Racine. The totals varied from year to year, between 16,000 and 18,000. Since then the numbers have gone down greatly.

Generally they are considered to be northern nesters, although we have observed a few nestings in Northern Door and Washington Island the past 61 years. Sam Robbins writes in his excellent book Wisconsin Birdlife, Population and Distribution, Past and Present: “In early June 1939 and 1940, Carl Richter investigated six nests on islands in Door County. The birds nested in cavities in basswood trees. One pair chose an eight-foot stump with an entrance at the top and a drop of five feet to the floor of the cavity. Another pair used a tree that had an entrance 30 feet up and a drop of more than 25 feet to the cavity floor. Quite a climb and drop for newly hatched chicks!” 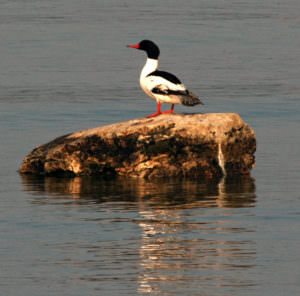 A male common merganser standing on a rock reveals its deep orange feet and legs. Photo by Roy Lukes.

Based on an interesting experience my friend Tony Kotyza and I had when we were still in high school at Kewaunee, I’m reasonably sure these birds also nested then near the vast marsh bordering that river. We owned an old canoe, and I guess we thought we owned the Kewaunee River, judging by the amount of time we spent there.

One summer we noticed a male common merganser ahead of us on the river. We decided to see how close we could get to the bird before it took off. To our surprise he couldn’t fly, but instead would dive and escape from us by swimming under water. This game of tag went on for a couple of weeks that summer.

All the while we were enjoying the sport we thought that the merganser was injured. Little did we know that he was incapable of flying; that he had lost all of his primary flight feathers as do all adult ducks just before the young are hatched.

If one were to analyze the overall shape of a common merganser, you would find that even though it is very duck-like in its appearance and habits, it is also considerably like the loon. Its legs are situated well back on its body, yet not as far back as on the loon. It walks with difficulty on land, but swims with great power and grace beneath the water.

Take a look at the long, thin serrated bill of one of these birds, and it’s easy to realize that their role in nature is to catch fish. One of their frequently used nicknames is “sawbill.” These two-foot-long beauties are more important in the balance of nature than many fishermen believe. It is felt that, even though they primarily eat fish, they consume small fish.

They are especially important to small northern lakes, where they contribute toward keeping the fish population at or below the full carrying capacity of the lakes, thereby helping fish to attain much larger sizes. Allow the lakes to become overpopulated with fish and you end up having an overabundance of small, runty fish that most fishermen are not interested in catching.

One of the most memorable experiences I ever had observing a common merganser came during an early summer evening 50 years ago as I watched one swim along the mirrorlike surface of the lake close to shore. Every now and then, down would go its head into the water in search of fish as it effortlessly skimmed along, hardly making a ripple. Suddenly he would make a quick arched dive forward, nearly clearing the water, and down he’d go after a fish. What a beautiful display of fishing expertise he presented.

The hen common merganser has a rusty-red head, a dashing plumelike crest that often blows quite wildly in the wind, and its reddish head and chin coloring is very sharply defined in contrast to the grayish-white throat and breast. The head of a hen red-breasted merganser differs in that the reddish chin gradually merges with the white breast.

A drake common merganser appears from a distance to have a black back and head sharply contrasting with its white body. Up close, especially with sun reflecting off its head, it is a striking dark iridescent green. The bill and legs of the drake are a bright orange. What a streamlined shape the body and outstretched legs produce when the bird is in flight.

Even though some duck hunters say that the flavor of mergansers parallels that of an old kerosene lantern wick, they are things of great beauty to enjoy throughout the year, especially in late February and March when their flashy splashing courtship activity hints of spring!