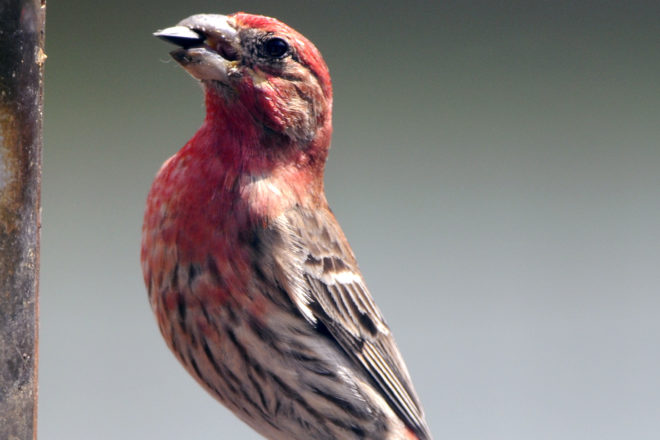 The male house finch has much more brown in its feathers with dark streaks on its flanks and lower breast. Photos by Roy Lukes.

My Grandma Skala saw eye-to-eye, in a sense, with Roger Tory Peterson, famous ornithologist, artist and writer. Grandma, not influenced by prior reading or ornithological study, provided my mother and me with a perfect description of the male purple finch’s color in 1941.

We were relaxing on lawn chairs in the shade of the McIntosh apple trees in our backyard in Kewaunee during mid-summer. The pedestal bird bath was nearly within arm’s reach of where we sat.

Suddenly without warning, a colorful pale geranium-red bird landed in the middle of the bath, somewhat startling us. Grandma took one look at the creature and exclaimed with her wonderful, happy style, “It looks as though that sparrow fell into some raspberry juice.” 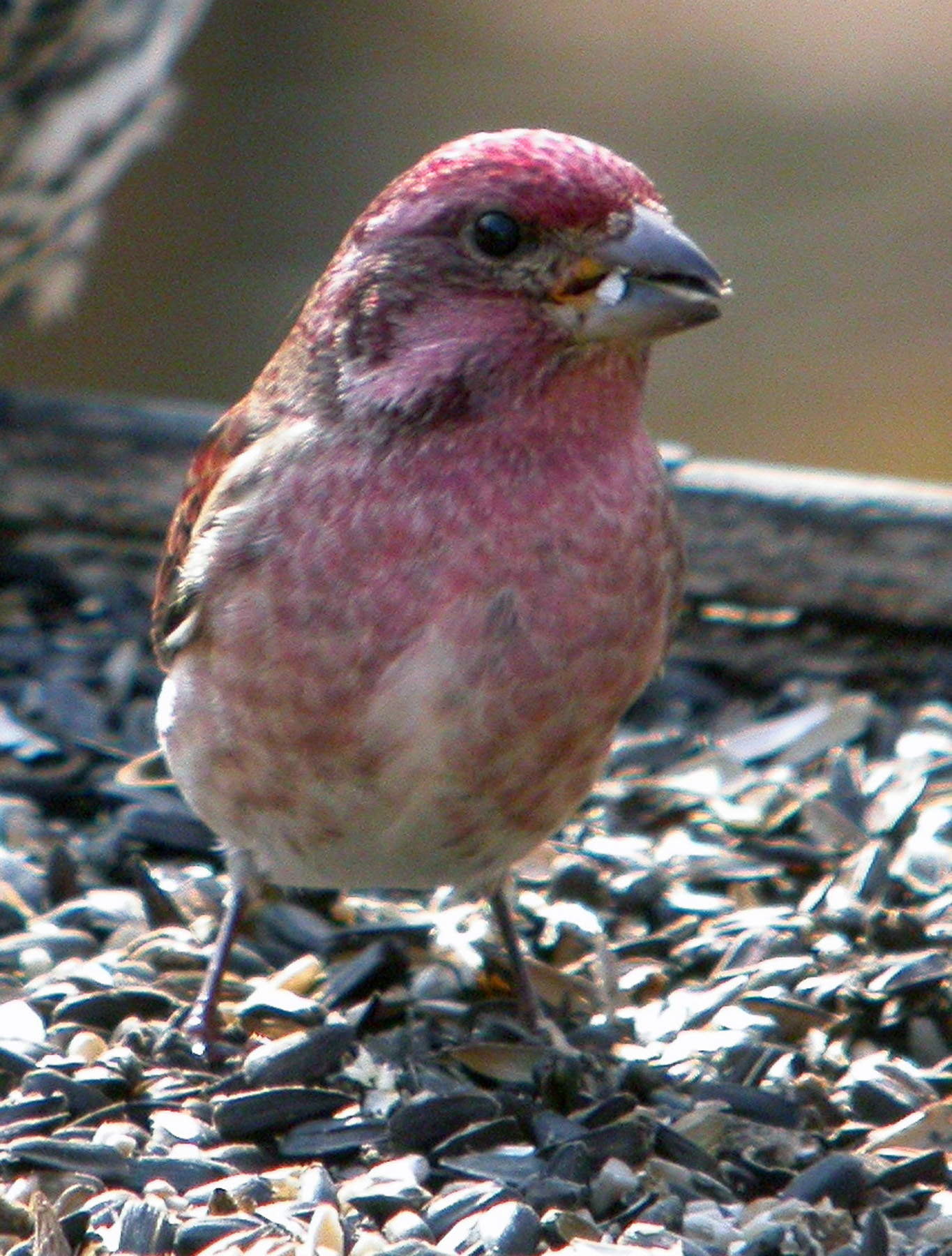 A male purple finch is rosy colored over almost its entire body with no fine brown streaks on the breast or flanks.

Many years later I read where Dr. Peterson described the male purple finch as “a sparrow dipped in raspberry juice.” My Grandma was absolutely correct on both counts. It was a house sparrow in shape and size, and the color of ripe raspberries. None of us knew the correct identity of the welcome stranger that had arrived in the twinkling of an eye. Not having any bird books at the time, its proper name didn’t become known to me for several years.

I banded songbirds for the U.S. Fish and Wildlife Service for about 25 years, and many fellow banders and I described the purple finches as erratic wanderers. They will patronize home feeding stations during the winter in prodigious numbers one year, then be scarce to totally absent the next.

Friends in Sauk City, Wis., banded 5,339 of these little biters during a five-year period in their backyard. Their high total of 2,010 occurred in 1965. It was common to observe as many as 600 at a time carpeting the ground beneath the feeders and decorating the trees near their home.

My best total for one day came on March 24, 1963, when I banded 180 in one day at the home of friends near Mill Center, northwest of Green Bay. More than 600 were banded there during three consecutive weekends that early spring. One male was recovered near Prince George, British Columbia 61 days after I had banded it. This is around 1,800 miles as the crow flies (oops, as the finch flies).

Several banding friends from Michigan had similar experiences. However, their purple finches were recovered in New England. Nevertheless our studies proved that, in addition to their usual north-to-south migration, some of these hardy, bubbly singers move in an east-west direction as well.

Now add the house finch to the scene and birdwatching can become confusing. House finches have been common native dooryard birds of the western U.S. for many years. Being colorful songsters and easy to trap, some enterprising pet dealers got the brainstorm, in the early 1940s, to capture and sell them in New York City as Hollywood finches.

This illegal act was quickly stopped by inspectors from the U.S. Fish & Wildlife Service. However, in order to avoid prosecution, quite a few pet dealers simply released their Hollywood finches outdoors and these colorful and hardy creatures have been steadily moving westward ever since. Our first sighting of them in Door County was in the summer of 1989.

To give you an idea of the reputation of this bright little “ragamuffin,” like the house sparrow in Wisconsin, they have for many years been denied the protection of law in California. They are said to outnumber house sparrows in the Northeast, where they are especially unpopular at bird feeders. They become very “hoggish” and dominate the feeders.

There have been instances whereby house finches have become destructive in orchards of peaches, nectarines, plums, sweet cherries, pears and apples.

On the positive side is the indisputable fact that they are noxious weed seedeaters par excellence. Thistle and dandelion seeds rank among their favorites. They also relish maple sap and tree buds in spring. Plant lice, caterpillars and beetles make up their small percent of animal food.

One ornithologist said, “They may nest anywhere!” They even use old nests of other birds such as robins and orioles and, being very tolerant of people, won’t hesitate to nest near slamming doors of homes. They are partial to masses of vines, thick hedges and spruce trees.

Normally they have two broods of young per year. In the early 1990s some friends had a house finch build a nest in a weathered Christmas wreath that hung on their front door.

These gregarious seedeaters are slightly smaller than their look-alikes, the purple finches. The male house finch has brown streaked flanks and underparts. His breast, crown and rump are bright red to orange-red. The purple finch male is more raspberry-colored and lacks the brown streaking on its belly and flanks.

The female house finch is finely streaked like the male but lacks any red coloring. She also lacks the dark ear-patch seen on the browner purple finch. Study the bill of the house finch and you will see that the culmen, or dorsal ridge, is considerably more down-curved than on the purple finch.

The purple finch’s nesting range extends from central Wisconsin to central Canada, where it stretches from the Atlantic to the Pacific. One could describe them as being strictly tree-dwelling birds of the forest, never far from especially evergreen trees. They winter from southern Ontario and southern New England clear down to the Gulf of Mexico. People with good hearing will enjoy the ecstatic, easy-flowing, musical warble the males produce. These persistent singers can be quite variable pouring forth loud, rich, warbling songs one moment and pleasantly soft arias the next, somewhat like a gently boiling teakettle.

One feature of their anatomy that I learned very quickly while banding them is their strong, stout, cone-shaped bill. They are biters of great strength while contained in the hand. As a matter of fact, practically all birds strongly resent being touched by the human hand.

The scarcity of this bird one year and its abundance the next is one of the purple finch’s maddening charms. Perhaps this is why we enjoy birding so much. There is always the thrill of the unexpected, such as the “sparrow” that accidentally fell into the raspberry juice!