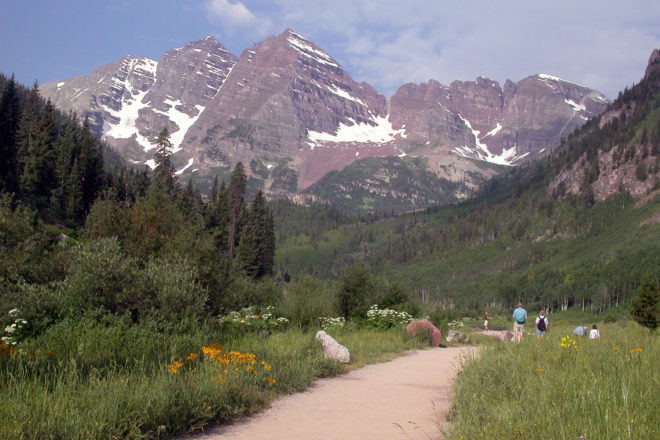 Fabulous mountain environments in the West, like Colorado’s Maroon Bells pictured here, have been saved for all time for all humanity and wildlife. Photo by Roy Lukes.

There are few people whose ideas and beliefs I would be quicker to defend, whose daring adventures many wish they could have duplicated during the prime of their lives and whose nature writings should be read and taken to heart by every American – young and old – than those of John Muir. His many accomplishments were surely monumental, worthy of his being honored on April 21 – officially recognized as John Muir Day.

Muir’s family immigrated to this country for religious freedom when Muir was 11 years old. His father, who worked John and his brothers mercilessly, believed that God and hard work were by far the best doctors. The large portion of the Holy Bible memorized by young Muir attests to the multitude of beatings his father bestowed upon him. In later life Muir wrote, “In all the world I know of nothing more pathetic and deplorable than a brokenhearted child, sobbing itself to sleep after being unjustly punished by a truly pious and conscientious misguided parent.” 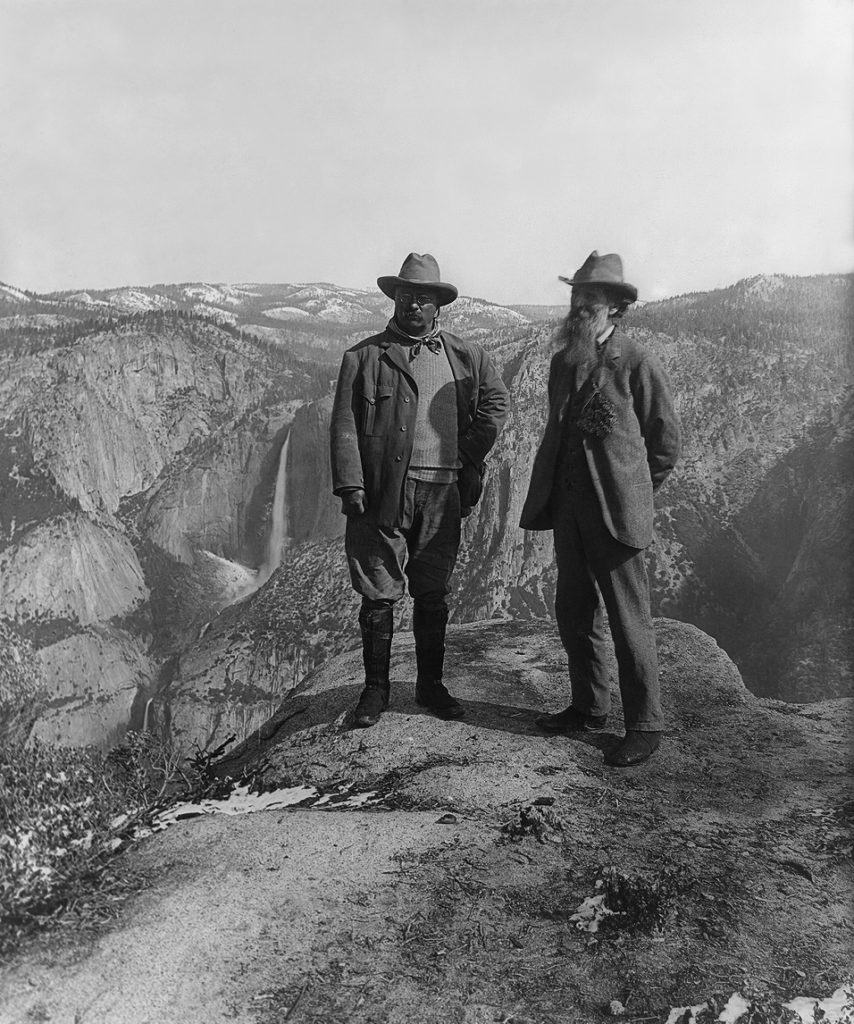 U.S. President Theodore Roosevelt and John Muir on Glacier Point in Yosemite National Park, with the upper and lower Yosemite Falls in the background. Public domain.

To read Muir’s great book, The Story of My Boyhood and Youth, is to come to better understand how and why Muir could have gone on to become so famous. You will sense the importance of young Muir living close to Nature and realize, knowing of the severe beatings that would follow, why he would dare to steal away from home during the prime of spring to experience what he called his “Saturday Runaways.”

In looking back upon these important childhood adventures he said, “Every wild lesson was a love lesson, not whipped but charmed into us.”

Their first home in Wisconsin, north of Madison, which Muir so lovingly described, was along Fountain Lake, now referred to as Ennis Lake in Marquette County. You will dearly love his loon versus the calico cat story and his excellent descriptions of the birds on their pioneer farm.

In later life, his book The Mountains of California condenses about 10 years of experiences with the water ouzel, or dipper, into a choice essay thought by some to be the finest bird biography in existence. We have seen exquisite TV nature specials about the water ouzel, even showing how the bird catches its prey under water, that at times I almost felt as though I were cheating. Learning of these incredible feats while seated in an easy chair is little match to the many years of grueling field experiences that led to Muir’s fine essay!

Fortunately John Muir kept meticulous journals and sketches of his many exciting and daring adventures afield. He was a lifelong class member of the “University of the Wilderness” and freely throughout his life advised thousands of people to go to Nature’s school – the one true university. He reveled in all facets of Nature from the violent to the sublime and was a firm believer that “the clearest way into the universe is through a forest wilderness.”

I highly recommend the book The Wilderness World of John Muir (Houghton Mifflin) edited by Edwin Way Teale. Teale’s explanatory and personal comments preceding each of Muir’s writings add so much toward the reader gaining a much better appreciation of this unusually fine man. Among what are considered Muir’s best writings, contained in this book, are “The Water Ouzel.”

Throughout his years of fighting conservation battles aimed at preserving pristine parts of the U.S., including his campaigns against the cattlemen, sheepmen (he called sheep “the hooved locusts”), and loggers in the Yosemite Valley, he made use of his vast knowledge of natural history and ability to communicate with people.

He was a master in serving as a catalyst at a critical period in America’s development, helping considerably to release a wave of public enthusiasm for conservation in the 1890s and into the early 20th century.

Muir’s eloquent writings and vigorous stands for good conservation and preservation practices were widely published in periodicals of the day resulting in a huge following especially of urban people far removed from wilderness areas. Presidents, including Theodore Roosevelt and William Taft, literary giants such as Ralph Waldo Emerson and John Burroughs, and industrial leaders including Henry Ford confided in John Muir and enjoyed being with him.

Undoubtedly his outdoor experiences, firsthand knowledge and intimate familiarity with the remaining wild places of the West strongly influenced Presidents Roosevelt and Taft in their decisions to set aside national park lands. 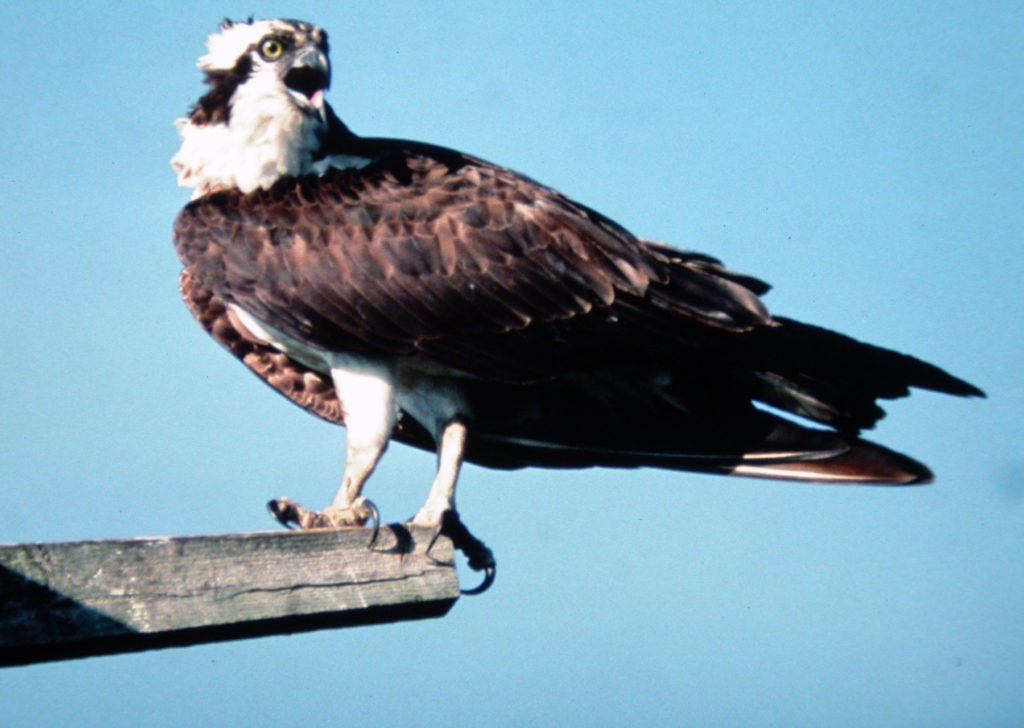 The osprey populations greatly improved once DDT was banned from the environment. Photo by Roy Lukes.

Travel with Muir by reading his A Thousand-Mile Walk to the Gulf. What an incredible journey he had by foot through so much of the country. His legacy lives on through the many wild places and national parks he helped to preserve.

It is fitting that Muir had his early start in Wisconsin, the home of Gaylord Nelson, who is the founder of Earth Day; and how appropriate that Earth Day comes right after John Muir Day.

Gaylord Nelson was born at Clear Lake, Wis., in 1916 and was elected to the Wisconsin State Senate in 1948 at the age of 32. He became Wisconsin’s Governor in 1958 and was elected to the U.S. Senate in 1962. His first Senate speech, March 26, 1963, was in support of a bill to ban detergents from water supplies. He said, “We need a comprehensive and nationwide program to save the natural resources of America. We cannot be blind to the growing crisis of our environment. Our soil, our water and our air are becoming more polluted every day. Our most priceless natural resources – trees, lakes, rivers, wildlife habitats, and scenic landscapes – are being destroyed.”

To make a long story short, Mr. Nelson, along with other leading government figures, failed for seven years to put this issue onto the national political agenda. Finally Senator Nelson worked to develop on college campuses across the country a huge grassroots protest over what was happening to the environment. Mr. Nelson, at a conference in Seattle in September 1969, announced that in the spring of 1970 (and as it turned out, the first Earth Day, April 22) there would be a nationwide demonstration on behalf of the environment and invited everyone to participate.

The wire services carried the story from coast to coast and the response was electric! The rest is history. Within three years the U.S. Congress had banned DDT, established the Clean Water and Clean Air Acts, as well as the Endangered Species Act, and the president’s Council on Environmental Quality was created.

Senator Nelson received the Presidential Medal of Freedom in 1995 for being the father of Earth Day, inspiring us to remember that the stewardship of our natural resources is the stewardship of the American Dream. We all must work to sustain the Earth Day concept and work to improve the environment throughout the year!