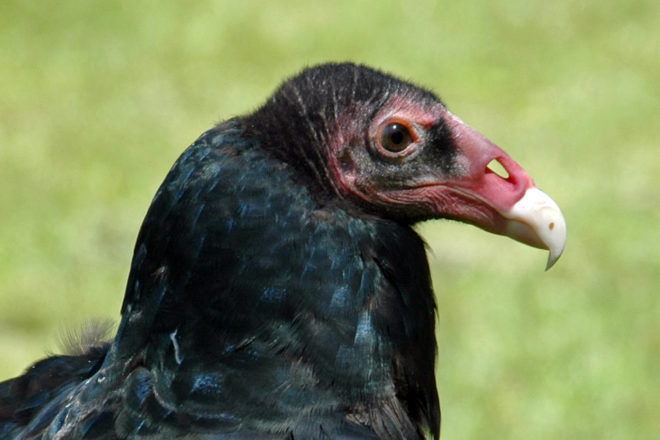 A close view of the turkey vulture’s head shows the large nostril and lack of feathers around the face, one that only its mother can love. Photos by Roy Lukes.

Many people see this huge bird that circles in the sky like a kite on mild late summer and autumn days, but few get a close look, which may disturb some viewers. The bird whose appearance and reputation is not the best is the turkey vulture.

Its seemingly effortless soaring flight is beautiful to behold, perhaps unsurpassed by any native bird of our state. The dihedral (shallow V-shape) of its wings while in flight is an excellent field mark of this spectacular flier. Watch, too, for its two-toned black and gray wings.

Seeing several of them making lazy circles in the sky doesn’t necessarily mean they have found some carrion on the ground below on which to feast. They simply may be searching for a good thermal, which they will gradually ride to a higher elevation, and then they slowly glide downward until they locate another rising air current. All the while, these birds are searching for food, both with their keen sense of smell as well as with their superb eyesight. They don’t flap their wings any more than they have to, and with good air currents, may stay aloft for several hours at a time.

The first nesting record for Wisconsin was documented in the Oconto area in 1944 by biologist Carl Richter. LeRoy Lintereur found the next nest in the northeastern part of the state the following year. We had a call on Aug. 14, 1988, from friends living along Pebble Beach in northern Door County. They told of a large strange white bird sitting near the edge of a gravel road, unable to fly. 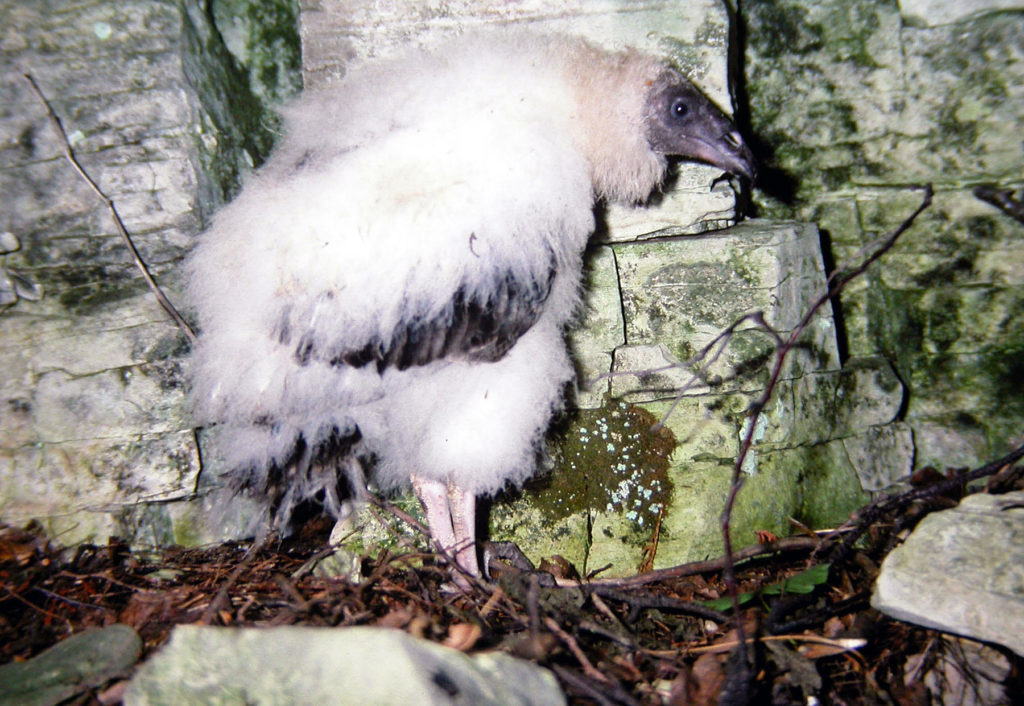 We immediately drove over to see and photograph the bird. You can imagine our excitement to learn that it was a young turkey vulture still “wrapped” in its cottony coat of white down feathers. It was a new nesting record for our county.

Some of the boys of neighboring families knew where the nest was, high above near the top of the rocky bluff. The fledgling, about 15 inches tall, had apparently been pushed or fell off over the edge of the rock ledge and landed near the road below. After photographing the bird we suggested the boys capture the juvenile vulture and return it to its cave nest above, which they did.

According to Samuel Robbins’ excellent book Wisconsin Birdlife, the range of the turkey vultures has been steadily moving northward in the state. They were rarely seen north of the Ohio Valley in the early 1950s. Today, they are reported from every Wisconsin county in the summer. A turkey vulture was captured and banded by Dan Berger in the 1970s and records later found this bird was re-captured in British Honduras (now Belize).

Breeding records in the state are still fairly uncommon but the Breeding Bird Atlas work done in the late ’90s and into the year 2000 showed them nesting sparsely but fairly evenly across the state. These huge birds with a six-foot wingspan choose very secluded nesting sites and consequently are difficult to locate and study. You would think such a monstrous bird would be easy to follow, but they aren’t. Our friend Max Martin reported a nest several years ago that was found in a dimly lit loft of an old unused barn.

Once located, it takes a very dedicated ornithologist having a strong stomach and great determination to study the birds at close range. Researchers who have worked with them claim they have been royally initiated into field ornithology. When frightened or angered turkey vultures have a nasty habit of regurgitating what has to be the vilest smelling matter imaginable.

The scientific name of the turkey vulture is Cathartes aura. Cathartes is from a Greek word meaning cleanser, scavenger or purifier. If “aura” means a distinctive air that characterizes a person or thing, then the vulture’s species name is well chosen, at least in the nostrils of the bird bander who works with and handles these strange creatures!

The name turkey vulture is fitting because of the adult’s red, featherless head – like its namesake, the wild turkey. A head without feathers is well suited to thrust into bloody carcasses of dead animals. It is thought that the bird does not attain its red head until it is at least one year or older. Young birds’ heads are blackish.

Many members of the animal kingdom, ranging from the smallest bird to the largest mammals, have nostrils for an excellent reason. For example, when a turkey vulture’s esophagus is filled to capacity with food to be swallowed, it would soon suffocate were it not for its nostrils, which enable it to swallow and breathe at the same time. Indeed, the nostril openings in a turkey vulture’s upper mandible are unusually large.

Charlotte and I had the good fortune Aug. 2, 1994, of counting 44 of these masterful fliers at once in and along the margins of a large stone quarry in southern Door County. All displayed the red head of an adult bird. We can only guess as to why so many had congregated at one site on that day. This scene would be familiar, however, to people of Hinckley, Ohio, who eagerly await the return of the buzzards – or turkey vultures as we call them – every year on March 15. A tradition since 1957, buzzard enthusiasts from far and wide gather at Buzzard Roost in Hinckley Reservation to spot the first returning buzzard of the season.

These masters of the sky and its thermals, crosswinds and air currents, may not appeal aesthetically to the great majority of people, but in reality, they serve as one of nature’s most important unpaid recycling creature of decomposing animal matter. Unquestionably they help to reduce disease and keep our county and roadsides cleaner.

Lift your eyes to one of the greatest fliers on earth and be thankful they continue to perform some of the unpleasant but essential functions in our environment.